1:2 – Punish Them! The House of Fortune is the Monster Mansion

Alternative Title: You’re Just One Cursed Tarot Reading From Being A Rapist

You know what’s hip in 1992? Fortune telling! Yep, there’s nothing quite as exciting or socially encouraged as paying an old filthy man in a dark alley to look at some sticks and tell you your fortune. Jadeite’s new plan is to… I dunno, suck energy out of perverts or something. Sailor Moon must bust-up a brand new fortune telling franchise (really?) which is acting as a front for the Dark Kingdom’s evil agent. Also, Sailor Moon totally almost gets raped. Twice.

Episode 2 is far less enjoyable than the first for two reasons; 1) A second studio takes over the art and writing in a couple of scenes, and they suck. 2) Sexual assault plays a major theme. Oh, also they introduce the new character of Motoki, who’s a complete knob, so you can make that 3 reasons.

Motoki attempts to out-hipster Tuxedo Kamen by wearing a waistcoat. You work in a FUCKING ARCADE, YOU KNOB

Jadeite’s latest plan to suck energy from humans comes to him as he’s loitering on a street corner – he notices a fortune teller in an alley and decides that this is the most efficient way to gather energy. You’ve got to give him points for originality, but one can’t help but suspect that Jadeite is making this shit up as he goes along.

Usagi, meanwhile, is crushing on the local Lothario Motoki, seen (and mocked) above, and after lustily comparing him to her father (no seriously, it’s messed up), bumps into a dark-haired cool-looking bastard who looks AWFULLY LIKE TUXEDO KAMEN. Expressing a complete lack of observational skills, Usagi retrieves the shoe she had accidentally kicked at our mysterious stranger and doesn’t give it a second thought.

“I’m totally not Tuxedo Kamen! I don’t even OWN a top hat. REALLY.”

Meanwhile, creepy stuff’s going down over at school. Usagi’s classmate Umino (you know, the massive dickish nerd) has a bit of a crush on her, so of course he decides to go to the evil cursed fortune house that Jadeite has set up (not sure how that’s going to help you hide your adolescent boner in class, Umino), and gets possessed or something. All I know is, from this point on the episode get’s super freaky. 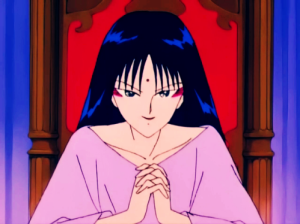 “I’m totally not a bad guy. Now hold still while I shove this glowing tarot card into you”

Under the influence of “EVIL”, Umino flips the skirt of their teacher Miss Sakurada, who seems powerless against the might of a 14-year-old delinquent, and then tries to forcibly kiss Usagi. Thankfully, our heroine shows all the little girls at home what to do if confronted with sexual assault, and proceeds to cry at high volume until the danger has passed. I guess that’s sort of funny…?

But it ain’t over yet, folks!

When Sailor Moon busts into the fortune telling house to teach Old Lady Nasty Pants a lesson, the monster’s defence mechanism is to set her possessed victims upon the hapless Sailor Moon. We get a scene of teenage boys literally about to gang-rape Sailor Moon. The only thing that stops the heinous crime is Tuxedo Kamen throwing a rose at the monster, which breaks the spell, but he appears to have left this to the last possible moment just to ramp up the dramatic tension, thus making his appearance all the more heroic.

What a dick. He’s still an absolute dreamboat, though.

Anyway, one Moon Tiara Action later, the old fortune teller man across the street is popular once more and free to perpetuate his mysticism and pseudoscience to gullible fools, and it’s the end. A little less satisfying than the first episode, but not every one can be a homerun, I guess.

Monster Freakishness Level: 4/5 (Her main attack was rape after all)