1:6 – Protect the Melody of Love! Usagi is a Cupid

Alternative Title: This Would Never Work With iPods 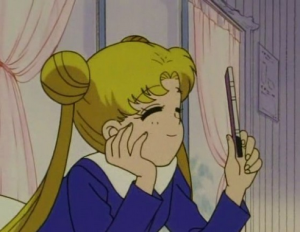 Jadeite’s latest ploy is to use an evil cassette tape (totally retro) to gather energy for Queen Beryl. He entrusts this tape to the bat monster Kyurene, who immediately fucks up and loses the tape at a record company. The poor sucker whose tape it is happens to be one Amade Yusuke, a jazz pianist very much in love. After being stalked by the monster, Yusuke runs into Usagi in the street (what are the odds) and our heroine takes it upon herself to protect Yusuke and his beloved record-producer Akiko.

This episode is amaaazing! The first really great episode since the first. The story is interesting and breaks the normal formula, the animation is beautiful (it is the A-Grade Studio after all) and there are some really good comedic moments AND some decent action!

Jadeite is playing a tape for Queen Beryl. For anyone born in the late 90s, this will seem horribly antiquated from the get go, but the image of Queen Beryl playing a tape in a floating sphere of water is both novel and nostalgic at the same time. She gives an emphatic “OOH”, which is the most animated we’ve ever seen the yellow-eyed dictator.

Jadeite’s plan goes wrong immediately – he gives the energy-sucking tape to the monster Kyurene with the instructions to spread the tape’s powers in a record company. The tape is taken by Akiko, a record producer, under the impression that it’s the demo tape of prospective artist Amano Yusuke. Kyurene has the opportunity to murder Akiko and retrieve the tape, but decides not to since there’s also a random fat guy in the room. My advice? You probably should have just killed both of them. 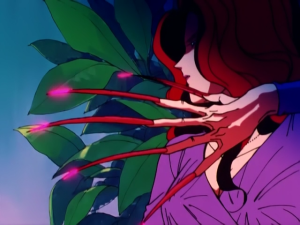 “I could kill them, but then I run the risk of breaking these stupid nails”

The unfortunately living Akiko hands the evil tape over to Yusuke in the building lobby, which is the start of all his woes. Yusuke is besotted with Akiko, but can’t bring himself to confess his love.

Incedently, the method in which the evil tape is meant to extract energy is by infecting stereos with a high-pitch frequency. The fear that subliminal frequencies would rewire our brains and make consumer zombies of us all lived on well into the 90s, although it’s a rather old-fashioned trope nowadays. In fact, all studies show that subliminal advertising doesn’t work, but that’s not to say an evil infected Justin Bieber song couldn’t one day suck energy from the human race as a sacrifice to the Dark Kingdom.

Usagi and Naru, meanwhile, are listening to a CD of Amano Yusuke’s piano music, which is awfully futuristic considering it’s 1992. Why is Jadeite using a tape? Maybe the Dark Kingdom can’t afford a CD player yet, those things were pricey back in the day. Usagi has to walk home in the rain in a new outfit (with a matching umbrella, no less. Either she’s coordinated or the colouring artists couldn’t be bothered to change paints. 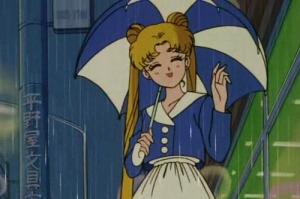 Get your fashion tips from a 1992 Japanese cartoon, ladies

Usagi is just about to play video games in the middle of the night (a fictitious woman after my own heart, here) when a frantic and sodden Yusuke comes barrelling down the street knocking her over. Usagi is understandably upset that her new outfit is ruined. Actually, she’s not so upset as she is, uh, homicidal. 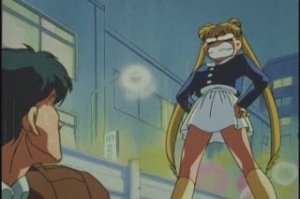 If you have to die, this isn’t a bad way to go

Yusuke is cowering in fear under Usagi’s threat of death, which sort of takes her back a little. As it turns out, Yusuke is being stalked by the creepy bat-flavoured Kyurene. There’s a brilliant flashback of Yusuke spotting the monster down a dark alley and being chased by something just horrifying.

Yusuke leaves Usagi, saying he has a gig at a jazz club, but Luna urges Usagi to follow after him lest he be brutally murdered. Usagi is more concerned that Yusuke is something of a celebrity. Honestly… 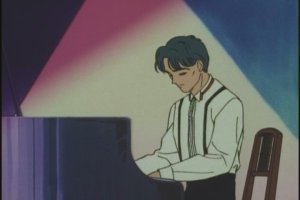 He’s just been running around in the rain screaming about monsters, but now he seems pretty chilled out

At the club, Usagi’s age becomes an infiltration problem yet again, so she busts out the trusty Transformation Pen to turn herself into a “cool grown-up musician”. Apparently this means funky green hair from the 80s, a miniskirt (WOO!), purple leggings and a corset that leaves most of her torso bare. It’s AMAZING. 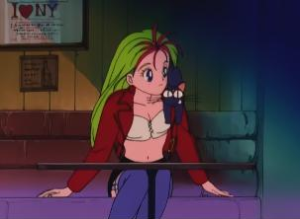 This is what all musicians looked like back then. It was a simpler time

Usagi solves the problem of getting Luna into the club by forcing her to pretend that she’s a fur scarf. Our poor long-suffering Luna, eh? Inside the club, Usagi is doing her best to blend in. A waiter approaches her for an order, and we get this beauty: 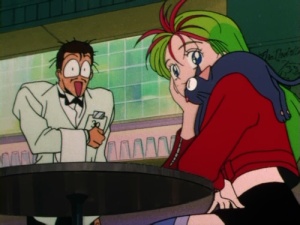 It’s a simple exchange, but it makes me laugh every time, especially since Luna, still pretending to be a stuffed scarf, is shaking her head in disbelief.

After the performance, Yusuke is set upon by bat-face Kyurene again (she pops out of a glowing red elevator), and Usagi has to run to his rescue. The monster has made off with Yusuke’s precious tape! There are apparently no copies of it in existence! It’s the one that has all his feelings of affection for Akiko in the music! Whatever the excuse, Yusuke is pissed, and Usagi joins him in his attempt to track Kyurene down.

There’s a great car chase in which the pair speed through Tokyo after the bat-bastard. It’s beautifully drawn, and really shows the animators put a lot of effort into this episode. Yusuke is a great character, switching between a mysterious artistic whisper to embarrassed squawks when the subject of Akiko is brought up.

A confrontation at the record company takes place, with Kyurene finally revealing all of her sexy batness, before taking Akiko hostage, demanding that Usagi hand over the tape. Usagi throws the tape high into the air, when this happens: 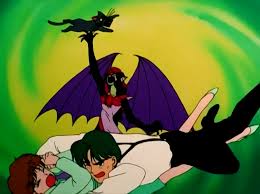 That’s actually a pretty good move! Usagi is really getting the lead out today, and she’s not even transformed yet! Even though Luna destroys the tape so that there’s no risk of an energy-sucking attack anymore, Usagi goes to hunt the monster down. This episode is just packed!

The monster flies to an outdoor amplitheatre, where the final showdown takes place. Kyurene is kicking Sailor Moon’s ass with her high-frequency attack until Luna throws a microphone, amplifying the monster’s attack back at her so that Sailor Moon can deliver the final Moon Tiara Action death blow. OK, so the idea that speakers can fire energy blasts make no sense whatsoever, but this is a great fight! 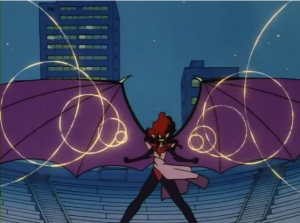 “OK when did you install those energy-blasting speakers, because that’s just not fair”

In the final scene, Yusuke and Akiko are reportedly married, and Usagi and Naru are listening to his latest album. This time the CD’s front cover has a rather familiar silhouette and the title “Moonlight Lady”. I think? My Japanese kind of sucks.

All in all, this episode is one of my favourites, even compared to later seasons. A menacing monster, a tidy little love story, a jazz club, a corset (THAT CORSET, GUYS), a brilliant supporting character, this episode exemplifies why I love this show. 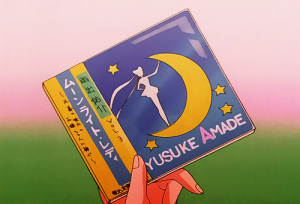