Welcome to a series of blogposts explaining various aspects of daily life depicted in Sailor Moon that might confuse the casual non-Japanese viewer.

Social commentary with a healthy dash of irony? Or trite and obvious evil soliloquy?  You decide.

It’s inelegant translation doesn’t even try to sound reassuring (the Japanese name for cram school being the equally blunt ‘juku’).

A school dedicated to cramming? What more can a teenager learn after six odd hours of school? That’s a good question but one which actually doesn’t require an answer. At least not in Japan.

Let me paint you a picture. In the interests of enabling you to have a full appreciation of this alien concept (an extra school you pay for and go to IN YOUR FREE TIME!!!111!11!!1), let’s examine the most extreme example to give you a little flavor of this Japanese institution.

You’re in third grade, high school. Your final year – your most important year. Your school day begins at 7.30 am and ends at 6.30 pm. After 10 hours of school, you’d think you’d be ready to head home right? Oh no my friend. After regular school is, you guessed it, more school.

Cram school to be precise.

Depending on your own preferences your evening school could be from around 7 or 7.30 until 10 pm at night. What a way to spend your youth. Still harboring a secret yearning to be a Japanese high school student? 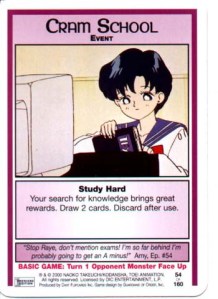 Short of depicting a virgin saving a child from an oncoming vehicle, does an image get any more wholesome than this?

Of course, when we first meet sweet little Ami chan she’s still in junior high school. Her school hours are probably a little shorter than the example I gave. But the idea is largely the same. She has those pesky high school entrance exams to ace after all, which are taken just as seriously by the best and brightest students as those for university (OK, maybe not as seriously, but they cause equal stress in nervous 15 year old hearts around Japan.)

So are students actually being taught more material in cram school? Well…yes and no. You see the cram school experience is entirely individual. Many students just use it as a place to review the day’s lessons and do their homework. Others use it to practice answering exam papers, which they may not get much exposure to in their regular school lessons (which begs one to question…what exactly are these teachers teaching?) Undoubtedly there are many more students that actually ‘learn’ entirely new material in their evening lessons. Ami chan among them.

Admittedly however, most cram schools don’t turn out to have evil, energy sucking monsters for teachers… but surely they’re less exciting for it. More’s the pity. 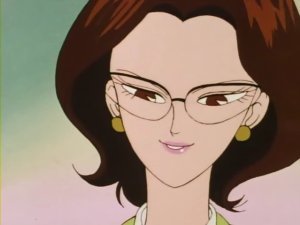 Finally, cost. Cram schools aren’t cheap. In fact, to enter the best high schools, it’s almost universally accepted that a junior high school student will have to attend cram school. To Western eyes, I suppose this seems strange. What kind of school system requires its students to study well into the evening, in an entirely different institution, in order to even consider having a hope in hell’s chance of passing the exam of the high school of their choice?

For that, I have no answer, except to say that this is a culture which teaches its young how to be Japanese from a young age. Part of this is accepting your duty and role in society. As a student your responsibility is to dedicate your entire self to your academic goals. Your entire time. The cram school is but one part of this.

Is cram school for all students?

Have a gander at Usagi’s sheer horror at her mother’s suggestion to attend one (and general scholastic ineptitude) to answer that question. Despite intense academic pressure, not all Japanese students feel the need to attend one. Especially those whose families just can’t afford it. (Ah meritocracy, so beguiling in theory, yet so elusive in practice.)

Cram schools are, in fact, ubiquitous across Asia. They are part of the educational culture, just as smoking behind the bins and eating soggy fish fingers for school dinners is part of ours (ahem, can you tell I’m British?)

Now that you have a deeper understanding of the school of cram, I hope you’ve developed a new found appreciation for Ami’s dedication to devoting her entire time to the act of learning.

That or undiluted horror.

-Katy has lived in Japan for a number of years working in a school. When not dealing with snotty Japanese children, she can be found loitering in stationary shops deciding whether or not to buy a new ruler. Her favourite Sailor Senshi is Sailor Saturn, because, in her own words, “she can destroy the world n’ shit, innit”

Delightfully morbid with a fondness for heartbreak, pastel tinged nostalgia and grainy black and white photographs... I love YA novels even though my teens are far behind me. I lived in Japan for three years. I can stare at pictures of cats for hours ♡ The Internet is equally the greatest and worst invention of humankind and in the paper versus electronic book debate I am sitting firmly on the proverbial fence. View all posts by keitiak