Alternative Title: Dreams Are Private For A Good Reason 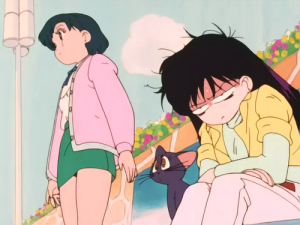 Jadeite’s increasingly terrible plans, not to mention his penchant for playing dress-up, has led to his most audacious plan yet, and it hasn’t gone unnoticed by the Sailor Senshi. Noticing the large number of peculiar disappearances at the Dreamland Theme Park, the team investigates. Unfortunately, Usagi and new member Rei are at each others throats. Will they manage to swallow their petty bitching and get on with detective work?

For an obvious filler episode, this one is actually pretty darn good. What it lacks in drama it more than makes up for in pure comedy gold. If there’s one thing Sailor Moon got down, it was the art of squabbling.

The episode opens in the Hikawa Shrine, with our favourite long-suffering cat Luna beaming with pride. Finally, three Sailor Senshi have been awoken and now that they have Sailor Mars, they can get down to business (Ami didn’t count as an asset to the team, apparently).

Luna’s lecture on their mission goals is cut short by an argument that breaks out between Usagi and Rei – Usagi wants to borrow a Sailor V manga, but Rei can spot a sticky-handed page-folder when she sees one and flat out refuses. 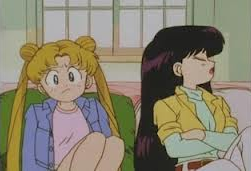 “She’s a bitch and she smells like failure. No she can’t read my comics”

I would do likewise. Manga is a precious commodity and must be treated like your offspring.

Luna is about at her wits end, but luckily Ami is there to brown-nose like there’s no tomorrow. It seems she just can’t stop being a goody-goody. It’s sickening, quite frankly. She announces that she’s noticed in the newspaper that dozens of people have disappeared at the Dreamland Theme Park (definitely not associated with Disney, DEFINITELY) and evil things just might be going down.

Sadly, the only thing that seems to be going down is Jadeite’s career (and possibly his testosterone levels) – he’s getting a chewing out from Queen Beryl over allowing Sailor Mars to whip out her miniskirt. It’s rather refreshing to see Jadeite genuinely worried, without that self-satisfied shit-eating smug grin on his slimy face.

It occurs to me that I don’t particularly like Jadeite. Excellent job, Sailor Moon writers!

Yeah, THAT’S the look I wanted

SO. Dreamland. It’s what you generally imagine a theme park to look like. Also Jadeite is dressing-up (FFS dude GET A GRIP) as a security guard, manhandling the press who are demanding answers over the disturbingly high number of people (50 at this point) who have gone missing from the park.

As for the police? Not a whisper. Good job, boys.

Usagi, Rei, Ami and Luna are all donning their investigatory hats in the park. Well, Usagi is acting like a 4-year-old and playing on all the rides, until chastened by Rei. These girls are going to end up in a street brawl any second now.

Well, ok, it’s not this severe yet, but give it time…

It’s at this point that Usagi meets a lion.

Yes, a lion that says “Hello” – it’s a mechanical-animal (a Mechanimal, if you will) controlled by a freaky princess-looking lady with a red apple. This chick is clearly not going to suck your energy.

“Don’t be alarmed by the fact that I use technology decades in advance of what exist, or that I’m clearly evil”

Rei can sense a dark aura from her immediately, and tries to warn the poor dense Usagi, but the girl is having none of it. The princess is just too nice to be evil! It’s not like Rei has psychic powers or anything. As a farewell, the creepy pink freak invites them all to come to a show in the candy house. Add ‘perverted’ to the list of adjectives too.

Incidentally, within the candy house is Jadeite, all by himself, in the dark, muttering about how he’s going to “suck the Sailor Senshi dry” when they come into the house of candy. It’s official – he’s cracked.

The hypocrisy in this image is stunning

Although Rei may pretend to be more mature and collected than Usagi, it doesn’t take much for Usagi to drag Rei down to her level. As they say, what we dislike most in others is what we see in ourselves. Or whatever.

Usagi and Rei decide to chill the out by riding the miniature railways, the better to scout the park. When the train stops suddenly, Usagi smushes her face into the person in front and, lo and behold, it’s the Mysterious Stranger (I’m just going to start calling him Mamoru because, although the show hasn’t yet mentioned his name, this is getting ridiculous).

“It’s weird, right? It’s like our lives are just a series of scenes held together by poorly constructed plot contrivances”

If you thought Rei could exchange harsh words with Usagi it’s nothing to how Mamoru and Usagi lay into each other. Mamoru’s worst crime is to teach Rei to call Usagi “Dumpling Head”, and Usagi wonders aloud (legitimately) why a man is by himself in a children’s theme park riding the miniature railway.

Rei asks Usagi if she thinks Mamoru sort of looks like Tuxedo Kamen (JESUS CHRIST HE DOES SORT OF!), but Usagi is mortified by this suggestion.

Ami, meanwhile, is left alone for 2 minutes in the candy house and manages to get herself knocked out and drained of her precious “dreaming” energy. You’ve got to start upping your game, Sailor Mercury, this is getting embarrassing.

WHO IS EVEN FREAKIER THAN UPON FURTHER INSPECTION.

Freaky Doll Head’s powers are to send people into dreams, where she can then stab them to death at will. Still, she remains awfully polite. And this is where the episode gets freaky.

Horrible Doll Thing burps out some dream gas, sending Moon and Mars into a wonderful forest. Tuxedo Kamen turns up and *sigh* the girls completely lose their shit. It’s really rather sad. Luna is rightly appalled as the girls lose themselves in the fantasy of riding plastic horses while completely besotted. 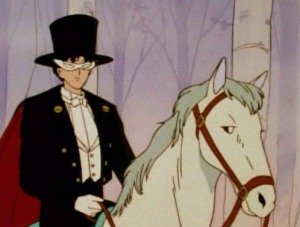 Thankfully we are spared any further sacrifice of Usagi and Rei’s pride by the real Tuxedo Kamen, who throws a magic rose at Creepy Doll Face’s apple, thus ending these disturbing visions.

Oh, did I mention disturbing visions?

Heeeeeey Ami’s back! The trio unite their powers for the first time! Sailor Mercury uses her Bubble Spray to… make things misty (?), and Sailor Moon and Mars combine Moon Tiara Action and Fire Soul to make an awesome FLAMING TIARA OF DEATH. Look, it’s the power of team-work and friendship! 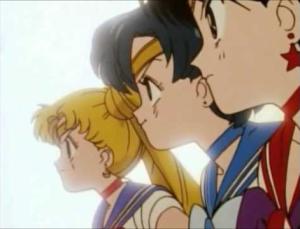 “We’re calling the police! You gassed me and made me ride a broom in a miniskirt!”

This atmosphere of goodwill and comradeship doesn’t last long, however. Walking through the theme park later, Usagi is convinced that Rei’s Mr Whippy ice-cream is bigger than hers and demands a switch, which is selfish, stupid and disgusting all at the same time. Oh how I love Usagi.

They’re talking about those brooms again

This episode makes no attempt at social commentary and is complete filler, but there are a lot of really enjoyable scenes. Usagi and Rei’s interaction with Mamoru is priceless, and actually pays off in later episodes. The sight of Sailor Moon riding a broom is disturbing to say the least, and will haunt me till my dying days, which tells me that this is a solid episode!

Monster Freakishness Level: 4/5 (Dolls creep me out, but she’s not as creepy as she could have been)

Bubble Spray Effectiveness Rating: 2/5 (Just give her a crowbar, or a gun or something. Please?)