Jadeite’s reputation has taken a hit recently with the number of times he’s been defeated by little girls. The powerful monster Tetis, besotted with the cold (and clearly fridgid) Jadeite, offers up a plan to steal the energy from over 600 people at once. All over Tokyo, couples are invited to board a brand new Romantic Cruise. Usagi is obsessed with getting aboard, and sneaks in, only to find that the cruise is less romantic than she thought, and more “filled with jerks”.

I had forgotten that this episode existed, which is unforgivable because this is a fantastic episode. Well-written, beautifully animated (it’s the premiere Sailor Moon studio at work again) with moments that never fail to elicit a guffaw, this is one of the best episodes so far.

After finally being reprimanded in the previous episode for his failures and his stupid, stupid face, Jadeite is understandably eager to let someone else try their hand at the whole “energy-sucking” game. While brooding in his sinister lair (which seems to be just a darkened room, guys. He’s evil, but he’s thrifty), Jadeite is approached by an attractive water-lady-monster by the name of Tetis.

Tetis is just crazy mad in love with Jadeite. This seems to be a little unrequited, and as a result, her frequent attempts to raise some sort of romantic response from Jadeite are a little pathetic to watch, really. I would have preferred her to be a little more scheming.

“I’m sorry Tetis, but I need for focus on my career right now. Also, you smell damp.”

Tetis recommends her own evil plan to Jadeite, in the hope that she’ll get the chance of slipping him rohypnol or something during the course of the mission. And her plan to absorb a massive amount of energy in fell swoop is…?

I really shouldn’t have to spell out exactly what Operation Romantic Cruise entails, it’s all there in the title. Suffice it to say that free tickets have been posted to couples all around Tokyo, and Usagi wants to go real bad. It’s sort of her thing.

At school swirly-eyed dipshit Umino proves once again that he knows an awful lot about nothing important by reeling off facts he’s remembered about the ship, including the fact that it’s maximum capacity is exactly 666. That’s really subtle stuff, Tetis. 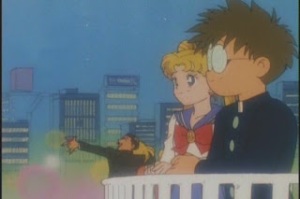 Even in his fantasies, Umino remains a speccy git

Finally, Umino reveals that he was given a ticket, but since he’s a junior high student and can’t stay out past 10pm, he gave them to his neighbour. Usagi is mortified, but Umino mentions that they were giving away free tickets to the cruise as a prize in a raffle in town. Usagi runs immediately, which leads me to wonder if she just ditched class for a fucking raffle.

Usagi keeps losing, naturally, again it’s sort of her thing to lose. Rei walks by (what are the odds, it’s not like Tokyo is a big city or anything) and is beautifully condescending about Usagi’s wish to get aboard the cruise – “We don’t have time for this stuff!” – before unashamedly walking up to the raffle herself and buying a ticket. I love this so much!

If her hypocrisy weren’t bad enough, Rei then uses her psychic powers to win the prize through extra-sensory cheating. Isn’t Rei just great?

Usagi begs Rei for the tickets, to which she is refused, than asks if she can come along with Rei, which is also refused. To be fair to Rei, Usagi accuses her of not having a boyfriend to go with. This slight is repaid by Rei inviting Ami on the cruise instead, with the promise that they’ll find boyfriends on the cruise.

I don’t think Ami’s too enthralled by the idea.

On the evening of the cruise’s launch, Usagi goes to loiter around the dock trying to sneak aboard.When Luna asks how, Usagi responds by whipping out the Transformation Pen and Luna loses her shit -” AAAAHHHH IT’S MEANT TO BE USED FOR JUSTICE!”. It’s one of the funniest responses from Luna in the whole of Sailor Moon.

And Usagi is now aboard dressed as a photographer, with Luna stashed in a box.

She doesn’t even poke air holes. This is how serial killers are born

Cut to Jadeite and Tetis, who helpfully the plot explain in excruciating detail, which would be awful if it weren’t for this bizarre exchange:

“You’re amazing, Tetis! Nobody would suspect that this is actually a wrecked ship that is built out of your evil seawater powers.”

“With my evil powers, this is easy to do.”

These two are perfect for one another.

Oh I should mention that at this point Jadeite is dressed up once again, this time as the ship’s captain. What a douche.

“Good. I need an audience for my latest fabulous outfit”

Rei and Ami’s voyage isn’t go as they had planned. Apparently they’re the only girls who came together (that’s hot), and no couple seems likely to breakup. Rei’s reaction is to eat like a Viking at the buffet (Ami is appalled) as if she has an eating disorder, since “If I can’t find a boyfriend I may as well eat how I want!” Wise words, Rei.

Meanwhile, Usagi is caught in the bowels of the ship by the captain. Swept off her feet by Jadeite’s natural good looks (this is the 7th or 8th time she’s inadvertently hit on him), she schmoozes up to him. Jadeite is freaked out by this, possibly he can sense that this photographer girl has magic powers OR he’s frigid.

“Please stop touching me, I have, uh, that glass-bone disease or something”

Luna, hiding in her box, senses an unbelievably powerful evil aura, but as ever Usagi is oblivious. The difference in their experiences around Jadeite is brilliantly done.

Tetis calls everyone to the main ballroom for a special romantic show. Sadly, the only show is to be Tetis transforming into a freaky mouthless water monster and sucking all the love energy from the room.

Which leaves Ami and Rei, since they’re not in love (except in my fanfiction).

Tetis is super pissed off about this, asking why they would come on a romantic cruise without boyfriends. Despite the gravity of the situation, Rei and Ami answer defensively. It’s a hilarious gag, which is further compounded by the arrival of Sailor Moon, who uses her appearance-speech to get in a dig at the poor, loveless couple in front of Tetis. It’s nice to see Rei getting as good as she gives.

This is a really weird moment – Ami just cannot believe that Sailor Moon might turn up to fight, despite that happening weekly

Thus begins the fight of the episode. Tetis moves the fight with Sailor Moon outside, where she can use her “evil seawater powers” to its maximum. The tried-and-tested combo of Bubble Spray -> Fire Soul -> Moon Tiara Action sees to ending Tetis (she really doesn’t put up much of a fight), but then Jadeite finally gets in on the action!

“Mwahaha! I control the sea! I- hey what are you doing with that tiara?”

Just as he’s about to strike a manly blow against a little girl, Queen Beryl transports him home. Just a couple more seconds and maybe he would have been able to rearrange Sailor Moon’s face, but alas, Queen Beryl is sort of stupid like that. She warms of dire consequences for Jadeite for using her personal servant Tetis without permission, using the same holographic projector as the Emperor did with Darth Vader in The Empire Strikes Back.

Back in Tokyo, the ship loses it’s shiny exterior and is revealed for the wreck that it is, so all the couples have to be rescused by the coast guard. There’s no exploration over what the hell all those people thought happened, or what the authorities made of the shipwreck now floating around Tokyo bay, but hey, that’s Japan for you.

I like this episode a lot. There’s not a lot of meat to it, it’s mostly a series of great gags, but hey, we can’t have deep-cutting social commentary on the state of the Japanese educational system in every episode, right?

Number of People Attacked Without Any Consequences: About 600