Alternative Title: Let’s Not Give Away The Ending Or Anything

It’s Jadeite’s last chance to settle things with the Sailor Senshi, lest Queen Beryl condemn the lad to Eternal Slumber. Luring the girls to Handea Airport at night, Jadeite unleashes the plan he thinks will save his life: he chases them around with jumbo jets. Only teamwork and Girl Power can defeat the hateful Jadeite and his stupid planes!

This is the worst episode yet. It’s such an important episode and it was given to the woeful Ass-Grade Studio. Badly written, badly drawn, the only interesting part of this episode is the approach to feminism, but by that point it’s too little too late.

SO. Queen Beryl is super pissed-off at Jadeite, and for good reason. Not one of his plans has ever gone un-Sailored, and he’s lost a good number of monsters to the tiara of doom, not to mention the several millions of the Dark Kingoms Yen he must have sunk into evil business ventures. Let it not be said that Beryl is not merciful, however – she gives Jadeite one last chance: kill the Sailor Senshi or be sentenced to “Eternal Sleep”.

That doesn’t sound so bad, but the monster-mash peanut gallery of shadows in the background are aghast at the suggestion of a decent night’s sleep for Jadeite. Perhaps it’s just Beryl’s malevolent tone that freaks them out. 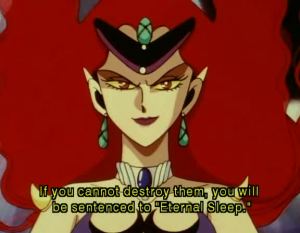 “Also I’ll totally let everyone draw on your face with marker pens… for all eternity!”

Jadeite is angry – not the raging kind of angry, more the petulant child kind of angry. If I were Queen Beryl (oh God please let me be Queen Beryl) and Jadeite was giving me those insolent looks he wouldn’t leave the room with those weird turquoise eyeballs still in his head.

This opening scene in the Dark Kingdom, with Jadeite getting chewed out, is the best bit of the episode. Great, tense music, spooky atmosphere, even the animation is passable. Unfortunately, this is where we must jump the compliment train for this episode.

“Hi, I’m an omen for things to come. Here, rub this excrement in your eyes”

Usagi and Luna are staring up at the night sky. At first it appears that our befuddled heroine is actually pretty good at her astronomy – she certainly knows her constellations in any case – but like most things she puts her mind to, hot beef completely derails her, and she loses herself in a fantasy of Motoki (the creepy arcade guy) and Tuxedo Kamen (the creepy mask guy. Quite a taste in men, Usagi).

Thankfully the giant holographic head of Jadeite is her before Usagi can start acting upon her carnal desires (no seriously, thank fuck) and threatens the entire city of Tokyo with ruin unless the Sailor Crew come to Haneda airport the following evening. He suggests that he has the power to burn Tokyo to the ground if they don’t show up, leading to the obvious question:

Why not just burn Tokyo to the ground? No? You’re not going with that Jadeite? You’re going to invite them to a place without innocent people you could use as leverage, on equal grounds? OK let’s see where that goes.

“Hey, do I look OK? I didn’t have time to change into my ‘fitness instructor’ costume”

The next day, everybody is obviously freaking out at the giant blonde dude in the sky. At school, Usagi’s stupid classmates are discussing the event, and Fat Horrible Nameless girl (you remember her) even suggests that they all go to Haneda Airport to see what will happen. Usagi suggests (screams, really) how dangerous that plan is, which naturally leads her friends to suspect that she knows something she shouldn’t know. How it took this long for them to notice something…

That night, the team, who aren’t transformed yet for some reason (that reason being a plot contrivance that goes nowhere), turn up at the monorail station on their way to the airport. There’s a nice little scene of the girls in the empty monorail staring out across Tokyo Bay at the looming airport, with all worried that they’re clearly walking into a trap.

And here’s the trap: the airport is filled with Japan’s best anti-terror police officers, enslaved by Jadeite’s rubbish magic. 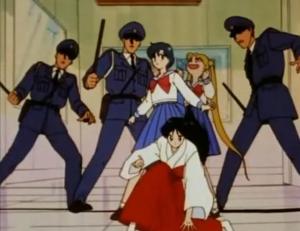 This goes on way too long

There’s a bit of a chase… it’s all terrible stuff. Ami decides to transform in front of them, hoping that they’ll be too hungover the next day to remember her face, and the other girls follow suit.

Ami uses her computer to discover that the guards are actually made of clay (DON’T CARE DON’T CARE DON’T CARE),and Mars kills them all without mercy. Jadeite decides that it’s finally time to make his appearance, and reveals that he was watching when they transformed!

Oh no! Woe is them! I’m not sure what Jadeite could do with the knowledge of what the girls look like normally. For one, they look exactly the same as they do costumed. For another, he still doesn’t know their names, where they live, anything really. It’s not much of a threat from Jadeite. Good job.

This doesn’t even phase the girls. Despite the gravity of the situation, the episode just lingers on “humorous” in-fighting between Mars and Moon, and it’s so painfully animated that I could barely bring myself to watch. Jadeite makes some sexist remarks and the girls shout back about GIRL POWER a good number of years before the Spice Girls stole it, which is actually pretty cool, but it can’t undo all the other mistakes. 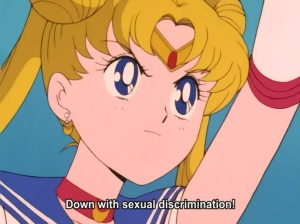 YES YOU SAID IT GIRL now would you please put some trousers on?

Nothing is clicking in this episode, which makes no sense. It’s a really important one, the end of Jadeite, the transition to a new story in the series, and the directors of Sailor Moon gave it to the Ass-Grade Studio? What were they thinking? As awesome as the before-its-time feminism is, I can’t give this episode a by. 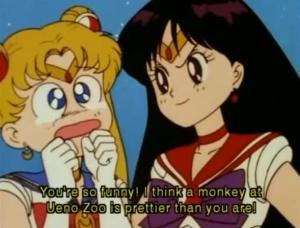 Girls, girls, don’t fight, you’re both equally as ugly in this episode

The big fight is as awful as the rest of the episode. Jadeite enchants planes to chase the girls around the runway (it’s soooo lame), and this goes on for about 10 minutes. Finally the girls decide on a plan of action – Sailor Mercury makes it foggy with Bubble Spray (such an amazing attack, guys)and Sailor Mars sneaks up behind Jadeite and tags him with one of her talismans, which causes the planes to chase towards Jadeite instead.

Yes, Jadeite is defeated by a plane rolling on top of him. What a fitting, yet curiously unimaginative way to kill off Jadeite.

BUT IT’S NOT OVER! Jadeite teleports back to the Dark Kingdom and Queen Beryl is not impressed. Eternal Sleep it is then! Hey it’s better than being a runway pancake, right Jadeite?

Out of the darkness steps the ray of hope for this sorry episode. A new enemy emerges: Nephrite! Thank God we have this fluffy-haired bastard to look forward to in next week’s episode! So long Jadeite, I’d be lying if I said I was sorry to see you go!

At least it ends on a high note. I love Nephrite, he’s so awesome. Also his hair is luxurious

Episode Score: 1/5 (If I hadn’t made my point already)

Jadeite’s Death Score: 2/5 (Seeing Queen Beryl shout Jadeite shitless was amusing, but Eternal Sleep didn’t do it for me)