Alternative Title: Who Knew You Could Beat People Up With Tennis?

With Jadeite out of the picture, the new lieutenant of the Dark Kingdom, Nephrite, starts his campaign of energy sucking. Preferring to attack individuals at the cosmic peak energy of their lives (don’t ask), he targets Rui, the rising tennis star of Juubango Junior High. Infecting her tennis racket with his dark magic, Rui goes nuts with the tennis stuff, abandoning her childhood friend Naru and being a total bitch. Can Sailor Moon foil Nephrite’s first plot? (SPOILER: Yes.)

There is a lot to like about this episode. After the catastrophy of the last one it’s nice to see Sailor Moon in the hands of decent animators and writers. With a brand new enemy, with a different modus operandi, the opening serve of the 2nd phase of Sailor Moon series 1 is a killer.

Nephrite starts his tenure of the Dark Kingdom’s director of operations by maligning his predecessor’s methods. I’m liking this guy already. Rather than attack a bunch of people to extract their energy, he’ll find people approaching their life’s peak energy level and take it all at once. The method of determining who is approaching this condition is… astrology. Oh dear.

“Virgo is in the 7th house or something”

Nephrite’s presentation to Queen Beryl (seriously, all it’s lacking is a PowerPoint) is rudely interrupted by the most curious of all the characters in the whole of Sailor Moon, in my opinion. Zoisite – another one of Beryl’s henchmen, one who is distinct by the fact that he’s a) super camp b) a complete bastard and c) I say this with the most exquisite sensitivity, there’s no other way to describe him but as a big flaming ‘mo.

We’ll cover Zoisite’s curious position as an open homosexual in a cartoon intended for little girls as he gets more exposure in the series. For now, suffice it to say that he manages to make Nephrite look like an idiot, then teleports in a puff of sakura petals.

Immediately these two are far more interesting in 2 minutes than Jadeite achieved in his entire run. Great job.

Nephrite retreats to his evil lair to “astrologise” who his first target will be. This lair is KILLER: a Gothic castle surrounded by a creepy pinewood forest and freaky evil gas emissions. Although Astology is bullshit, his method of reading the stars makes me want to believe. AND he’s even got a throne in there. I love Nephrite. 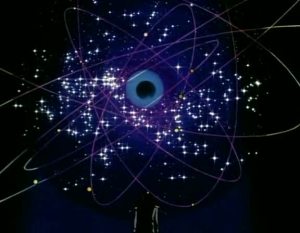 So who is his target? Rui Saionji, the tennis star of Juubango Junior High. She’s busy practicing at the courts at school, surrounded by admirers, which naturally includes Usagi. Naru calls Rui “Onee-chan” (big sister), which leaves Usagi nonplussed, until Naru can reveal that they’re only close friends, although Rui is a year older.

We’ve seen plenty of monster-of-the-weeks, but this is the first of many random-dude-of-the-weeks

Strange how Naru’s best friend Usagi had never seen nor heard of this relationship before, but whatever, I’ll let it slide. That’s how nice I am.

The rather public practice is completely disrailed by the arrival of a screeching red sports car stopping outside the school, and a tall, handsome, hairy stranger pops out (Usagi and near everyone around is immediately smitten). Whispers explain (rather clumsily, but it made me laugh) that this man is a millionaire president of a company.

OK, how the fuck did Nephrite manage to build himself a reputation where he can be recognised on sight by teenage girls? He’s been in the show for 5 minutes. I admire his balls (careful now) for being able to simply waltz up to his target unabashed, but still.

Not content with the enormous scene he’s already made, Nephrite announces his truly awful cover name, Masato Sanjoin (SANJOIN IS NOT A NAME, NEPHRITE), vaults over a 10-foot high fence onto the tennis court, takes a girl’s tennis racket, insults Rui then almost breaks her wrist with a return. You’ve got to love his style.

“Right, I’m going to need your wallet next”

He gives some empty words of advice to Rui and magics-up her tennis racket, leaving a glowing symbol. Upon touch, Rui’s eyes go blank and she spends the rest of the episode being a complete bitch.

His plan here is to leave a monster close to his targets, who will bring their energy up to peak level by making them go crazy for a bit, then suck out all their juicy, juicy energy.

It’s pretty amusing, and weird, to see a crowd of tennis players shivering in fear because Rui’s serves have become that violent. Several seem to be severely injured, limping and crawling away.

Naru is obviously suspicious that her “big sister” has just gone nuts.

Puberty will do that to a person, Naru

Meanwhile, Usagi’s team is learning for the first time from Luna that the enemy they have been fighting is called the Dark Kingdom, which is something I really thought they would have learnt before episode 14. Like any meeting between these girls, it ends with Usagi being majorly offended after being accused of incompetence by Luna and Rei. It’s a hard charge to deny.

Naru, meanwhile, is all upset at her friend’s new-found bitchiness and super-human powers (although she’s more concerned about the bitchiness) and drafts Usagi in to help her.

I never really thought about why Naru decided to go straight to Usagi with her suspicions that something was wrong with Rui. I supposed I put it down simply to that Naru and Usagi are best friends, but there is a subtle implication that Naru thinks that by telling Usagi, somehow shit will get done. It’s an intriguing possibility, one that beocmes more prevalent by the end of the series. 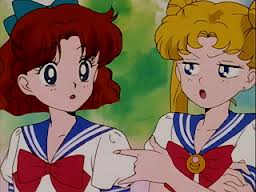 “I’m totally not Sailor Moon, Naru. If you say it again I’ll PUNISH YOU”

Also, you’d have to be a complete idiot not to suspect some weird behaviour from Usagi by now.

Usagi weighs the ideas of charging in herself or waiting for the rest of her team, but decides that if she does a good job here it might force the others to reconsider her usefulness. Her crafty-plan face is priceless. I really like her in this episode!

Rui, meanwhile, is almost murdering a couple of guys with her tennis balls. Naru tries to tell Rui to chill the fuck out when the girl LOSES it. I mean really goes nuts. She blasts Usagi and Naru back, which knocks out Naru (that was a  freebie) allowing Usagi to transform.

Things don’t go terribly well for Sailor Moon from this point on.

Her plan to show how well she could do on her own is tempered somewhat when a monster appears from the tennis racket and turns Sailor Moon into a giant tennis ball, bouncing her all around the court. It’s funny, but it’s also rather painful to watch.

Thankfully Tuxedo Kamen turns up, cutting the monster with a rose and having one of the corniest, cheesiest and greatest entrances yet. He’s just so ridiculously uncool that it makes him SO DAMN COOL. I can’t explain it. He even uses a new move: attacking with his cane (lol). 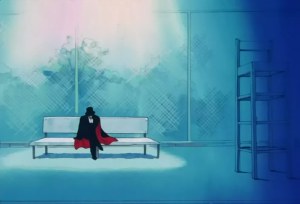 Yeah he’s a tool, but hey, it works

Sailor Moon and Tuxedo Kamen play doubles against the monster, dodging fireballs and whatnot, till Tux is able to throw another rose at its face. Apparently the petals are coated in some sort of acid or something because this monsters cannot to a goddamn thing until it gets every one of those rose petals off its stupid face.

Just as Sailor Moon goes in for the kill, a curious thing happens: Tuxedo Kamen falls to one knee, glowing weirdly and grunting in pain. We’ve never seen any sign of weakness before, what could this mean!?

Well you won’t find out anytime soon. Sailor Moon gives the old Moon Tiara Action and the monster explodes, and Tuxedo Kamen runs away like a baby in a top hat.

“Petals. MY ONE WEAKNESS”

Sailor Mars, Sailor Mercury and Luna all turn up as the fight ends, and Luna is forced to admit that maybe Sailor Moon isn’t as useless as she thought. We’ll ignore the fact that she would have been killed at least twice if it weren’t for the direct involvement of Tuxedo Kamen.

Anyway, Rui is back to normal, Naru is all happy, and the next day the two decide to play a bit of tennis. Frankly I thought the both of them would be sick of the sport by now. Usagi, leaning against the fence, imagines how nice it would be to play tennis with Tuxedo Kamen (my money’s on him winning).

The show ends with a rogue tennis ball smacking Usagi right in the face. You’ve got to love this show.

Naru Attack Count: 6 (Now that Nephrite’s here, this number is going to go waaay up)