Alternative Title: Evil Squirrels Are Out For Blood

A lovely park is set to be redeveloped! Eager to take advantage of the park before it gets turned into a McDonalds or something, Rei is determined to go there on a date with her latest infatuation, Mamoru. Apoplectic that Rei has managed to confused Mamoru into dating her, Usagi proceeds to stalk the couple. Meanwhile, the caretaker of the park is Nephrite’s latest target, and is given the power to murder people with squirrels and butterflies.

This episode had me cracking up all the way through. Rei hasn’t had as much airtime as I would have liked up to this point, and the inclusion of Mamoru into the plot creates a lot of interest too.

Hey guys, totally look at this park! It’s all quiet and stuff. How often do you get that in Tokyo? Oh hey here’s this old man playing with the dirt. Ami seems to know him for some reason. Weird.

No seriously, perhaps it’s my jaded 21st Century sensibilities, but if I saw an old guy in the park befriending a lonely 14 year old girl, I’d probably call the cops.

“Oh hey. You brought friends. That’s great. Want to see the inside of my shed?”

Anyway, this opening is a little clumsy, but we’ll forgive it this one time.

Let’s cut over to Luna, who appears to have been left out of the day’s outing with Usagi, Rei and Ami and is a little miffed about it. Lost in thought, and completely without the normal alert skittishness you’d expect of a sentient cat, Luna absent-mindedly crosses the road in front of a truck. HONESTLY.

Thankfully a woefully-dressed Mamoru is on hand to save the day. I’m pretty sure this is the second time Luna has had to be rescued from traffic.

I have a wee theory that the writers of the show were afraid that they had made Mamoru far too horrible to Usagi in the past for the audience to like him, so they gave him a scene where he rescues Luna. And hey, it works, he’s all manly and heroic!

The result is that Usagi accuses him of man-handling Luna (while manhandling Lunaherself), and Rei seems immediately and irrevocably obsessed with Mamoru.

NEPHRITE SCENE. Honestly, I could watch this guy talking astrology to himself all day. This time the stars are telling him that Cygnus is super bright, which means the filthy old pervert in the park who JUST SO HAPPENED to be friends with Sailor fucking Mercury is the target.

The girls are in the arcade. Rei is using the opportunity to grill Motoki (goddamn I hate this guy) about his college friend Mamoru. She really is rather blatant, but her wide eyes, blushing cheeks and naivety are all rather endearing… and rather Usagi-esque. As if to cement this comparison, Rei makes an internal and dramatic vow to snag Mamoru and drag his well-toned ass to the park, before slipping on a stool and smacking her head on an arcade machine.

Seeing the normally cool Rei acting like a besotted fool is H-I-L-A-R-I-O-U-S.

In the park, the construction work is beginning, with the creepy caretaker watching from behind a tree and muttering loudly to himself. Nephrite employs his usual trick of boldly walking up to his target, placing a monster in something near and dear to them, then sodding off. This time it’s the old man’s smelly disgusting gardening hat.

If I were the monster I’d demand somewhere better to sit for the next couple of days. Sadly, this is about as much of Nephrite as we’re going to get this episode. Better give me more next time, dammit!

“YAA! Does this look infected to you? Haha I’m only joking, I’m not even trying this week”

So the smeggy old geezer now has the power to control animals and use them to attack people. I haaate powers like this. It’s always a little lame. Smeg hat proceeds to teach the construction workers about the “wrath of nature” with butterflies (lame) and the energy within him begins to pump. Dark days ahead!

Back to what REALLY matters. The next day, Rei is to be found hiding around a street corner waiting for Mamoru, imagining how their “chance encounter” will lead to a beautiful romance. What happens, in fact, is Rei trips over in front of him and he steps on her head. Great start.

After asking if she’s okay, Mamoru just walks off. I think I love him at this point. Rei has to chase him down and asks him out for tea by ways of an apology.

Apology for what, Mamoru asks. Rei pauses “…For making you step on my head.” I laughed so hard it hurt me.

Either way, her plan works, and Mamoru takes her out, even if it’s begrudgingly. Usagi spots all this and is INCENSED, claiming that it’s “impure fraternisation”. To be fair, Mamoru is 17 and going out with a Junior High kid, so yeah, that is a fitting term.

As an aside, Mamoru looks way younger from this episode onwards, perhaps to make the age difference between him and the girls a little less obvious.

Rei’s date is going rather awkwardly, with her just copying everything Mamoru does, but she doesn’t seem to notice. Usagi, meanwhile, is outside and unable to sneak into the cafe because she has no money, so she recruits the passing Umino and convinces him to go “on a date” with her. Taken to its logical conclusion, this new career path for Usagi might be lucrative and deeply, deeply disturbing.

Attacks in the park are continuing as Ami and Luna are walking through (notice how Ami has the worst story lines), this time it’s evil squirrels.

“You’ll bleed for that, human”

The action is beginning on the other side of the park with Ami, Usagi and the muddy old man – he’s reached his energy peak! Nephrite’s leafy monster pops out of the man’s hat (she must have been holding her nose) and sucks his energy right in front of the girls, and they gear up for battle.

I actually don’t mind seeing the same transformation every week. It’s nice to switch off for a minute or so, and it wouldn’t feel the same without them.

Sailor Moon and Sailor Mercury’s transformation has an unintended side-effect: Mamoru, on a boat with Rei, goes into freaky pain spasms. After a scene involving evil birds and some impromptu swimming, Rei notices that “something’s wrong” and runs off, conveniently leaving Mamoru behind.

“Uh oh. I left my cape in the washing machine”

This is getting all rather hectic, isn’t it?

Moon and Mercury aren’t doing so well against the monster. Bubble Spray is mildly useful, in that it stops them getting eaten by butterflies and squirrels (LAME), but the girls soon find themselves bound by vines, which Sailor Mars has to burn off (swiftly followed by an inexcusably pointless up-skirt shot). Sailor Moon is understandably upset at having been set on fire.

Tuxedo Kamen does his usual routine of throwing a rose at the enemy to stun them long enough for Sailor Moon to get her shit together and Moon Tiara Action the monster. It’s a little disappointing after last week’s action-filled appearance of the top hatted-fool. 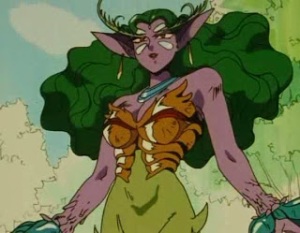 Shouldn’t a plant-monster be, I dunno, immune to roses? No?

As Usagi and Rei are arguing whether or not Mamoru is Tuxedo Kamen or not, the lot of them are joined by Umino, eager to continue his date with Usagi. She denies any such date loudly, and the episode ends with us feeling distinctly bad for Umino because of this snooty blonde teenager. Sorry, Usagi, I’m on Team Umino today.

Episode Score: 4/5 (The stuff between Rei and Mamoru bumped it up from a 3)

Fun Fact: Umino’s first name is Gurio, which is horrible