Nephrite has taken the last few defeats at the hands of the Sailor Senshi rather personally, and now he’s out for revenge. He sends out love letters posing as Tuxedo Kamen to every teenage girl in Tokyo in the assumption that the real Sailor Moon will take the bait. As it happens, it totally works, but it also snares Usagi’s friend Naru, who has developed a crush on (or foolish unadulterated love for) Masato Sanjoin, who just to happens to also be Nephrite. WHAT – ARE – THE – ODDS!?

This is one of my least favourite episodes of the series. The animation, the writing, everything is dreadful, owing to the fact that this is the work of the Ass-Grade Studio. Usagi is less lovably silly and more a boy-mad ridiculous parody. Come on guys, you can do better than this (he says to a 23-year-old episode of a little girl’s cartoon.)

This episode is a misfire from minute one. You may be fooled by the gorgeously drawn setting of Nephrite’s castle, but this is stock footage form the main Sailor Moon studio. As if to further compound the illusion, Nephrite is reviewing old CCTV footage of Sailor Moon kicking ass (and getting her ass kicked). It’s a little like CSI, which is odd because it’s never really explained what footage he’s watching.

Is it recorded memories of the dead monsters? In which case, the Sailor Senshi have transformed in front of several of Nephrite’s monsters so far, and he should be able to “see their real identities” or something. It’s weird, it’s incongruous, and it’s also lazy – they stick in a clip of Mars Fire Soul even though it makes no sense whatsoever.

This is all within the first 30 seconds. I know it’s nitpicking, but it demonstrates that I really have very little patience with this episode. 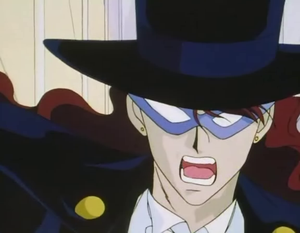 SO. What does Nephrite gain from all this? Why, he realises that Sailor Moon is in love with Tuxedo Kamen, as if it weren’t completely obvious. After being summoned to Queen Beryl, he proudly, and perhaps unwisely, promises to defeat Sailor Moon. Beryl responds by promising Nephy-poo the Jadeite “Eternal Sleep” treatment if he fails.

His plan, to say the least, is terrible.

Usagi is SUPER HAPPY – she’s received a love letter in the post from Tuxedo Kamen, asking to meet at the MS Department Store in Shinjuku the following night! It’s unspecific at who it’s actually talking about, and it’s CLEARLY a trap, but Usagi won’t be dissuaded from Luna’s dark warnings. Luna really isn’t trying that hard to warn Usagi here, it’s like she doesn’t even care.

Usagi is less ecstatic when she gets to school and realises that every teenage girl in Tokyo was given the same letter. 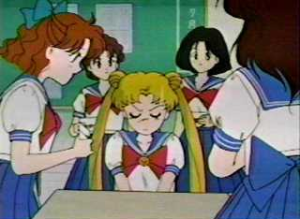 “Hey. HEY USAGI. Here’s evidence you’re not special. Hey are you listening to me?”

Oh Nephrite, what are you thinking? He’s usually so calculating and sociopathic. Even if one of the girls he sent the letter to actually WAS Sailor Moon (by no means a certainty), isn’t it likely that she would realise that the spam mail love letter indicates that it’s a trap? For the LOVE OF GOD this is terrible.

Even worse, Naru-chan lustily imagines that the letter might be sent from Masato Sanjoin, Nephrites alter-ego. Where did this “love” come from? She’s seen him once at a tennis match where he acted like a dick. A little more foreshadowing would have been nice.

In all fairness, I’d have dropped my pants for Nephrite in 2 seconds

Still, seeing the class teacher Haruna quietly seethe that she wasn’t given a love letter is amusing.

At the fabled department store in Shinjuku, Nephrite is walking around as the billionaire playboy Masato Sanjoin, checking out the dresses. Come to think about it, all four of the Dark Kingdom’s generals display mild to overt feminine qualities. Which is by no means a bad thing, I’m just pointing it out.

Naru spots Nephrite and makes her moves on him, asking him if he’s the Tuxedo Kamen from the love letter. Nephrite thinks that this is definitely proof that Naru is Sailor Moon (fucking idiot) and tries to play it cool, promising to see her the following night.

“Hey babe, they can’t put me on the sex offenders register twice, right?”

Naru is hooked for life.

Suddenly she’s on a roof dreaming of Nephrite’s horrid grinning face floating up in the clouds. Yeesh this is uncomfortable stuff. He’s about 1000 years old. It’s like Buffy and Angel, only Nephrite never gets fat.

Usagi decides that she’s going to go see “Tuxedo Kamen”, and then launches into the most painful 40 seconds in Sailor Moon – giving “Usagi’s dating advice” to the audience.

“Wear perfume and brush your teeth!”

This is not only painful, but it’s terribly animated too. 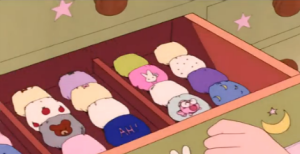 RIGHT. Naru goes to the department store and Nephrite jumps out dressed as Tuxedo Kamen. He looks like a horrible pale paedophile and, in a sense, he sort of is. He launches himself at Naru, accusing her of being Sailor Moon (almost poking her boobies), and looking like a complete knob. How could they do this to Nephrite!? 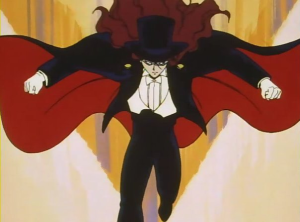 Nephrite notices that Naru is emitting some powerful energy and doesn’t hesitate to suck her dry. He’s a little shocked at how much juice he’s getting (it’s “love”. LOVE you moron), when Usagi pokes her head around the corner.

Instead of instantly noticing that some dude is dressed up as Tuxedo Kamen while grabbing her 14-year-old best friend, Usagi has to double check before realising that’s it’s definitely not the real Tuxedo Kamen. 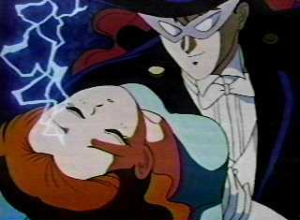 Usagi transforms, and we get a rather important scene, as somewhere else Mamoru falls down in the middle of a street clutching his head. “It’s happening again!” he says, as he transforms into a werewolf. Oh, I mean Tuxedo Kamen. He transforms into Tuxedo Kamen in the middle of the fucking street. This has surely caused some witnesses before. Perhaps he has to silence every last one of them.

Sailor Moon and Nephrite are exchanging business cards (there’s a pretty good moment of Sailor Moon kicking Nephy’s stupid hat off), when a big blue ugly lion is summoned to attack. As ever, the real Tuxedo Kamen has to save Sailor Moon.

They both run away… into an elevator, which is a little silly, really. Nephrite feels the same and laughs maniacally as he reveals that the elevator is rigged to drop to the bottom. Oh no. How will they ever escape. The horror.

Sailor Moon is acting like a lovesick fool even though she’s about to die, when Tuxedo Kamen does the obvious and opens the ceiling for them to jump out. They jump out onto a ledge and hang there for, like, 2 hours. It’s ridiculous.

Sailor Moon decides to ask some frivilous questions to “keep their minds” off the fact that they’re about to die, and that Tuxedo Kamen is doing all the actual lifting. Painful.

“Hey, I’m trying to save our lives, could you shut the fuck up for a second?”

There’s some awful manufactured tension as we think they’re about the fall when the elevator shaft doors open and Sailor Mercury and Sailor Mars pull them up. Oh yeah, you forgot these guys were here too?

“Just in time to save our lives! But, unfortunately, not this episode.”

There’s some petty squabbling, then Sailor Mercury pertinently points out that they should probably take Naru to a fucking hospital because she’s been knocked out for half an evening and probably has brain damage from asphyxiation.

Finally, we get to see Nephrite being PRAISED by Queen Beryl for the fantastic Naru-energy he brought back. The episode ends with the malevolent laugh of Nephrite as he makes plans around Naru-chan once more, the filthy bastard. 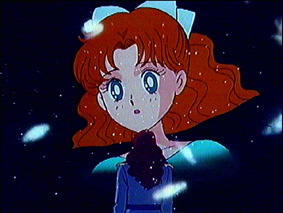 This is the most ominous thing ever

THE END. Thank God. The fact that the previous two episodes were amazing really throws this one’s inadequacy into sharp relief. I think that was the last truly terrible episode of the series. At least, that’s what I’d like to say, but I’ll probably find a few more stinkers.

Nephrite’s Tuxedo Kamen Impersonation: 47% (Not bad for a Tuxedo Kamen cosplay, but didn’t convince Usagi for more than 5 or 6 seconds)