Alternative Title: Guys, We Need To Discuss This Rapey Vibe 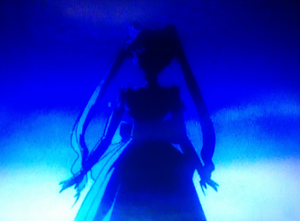 Everyone’s gone a little nuts about Princess Diamond (she’s from the Diamond Kingdom, obviously) and the amazing treasure she’s about to unveil to the world for the first time. Luna thinks this princess might just been the Moon Princess she’s been looking for, as does Mamoru, who’s been having dreams about her. Unluckily, Queen Beryl sends Nephrite to see if the treasure is the Legendary Silver Crystal that Zoisite has been searching for, and he pretty much spoils the party by possessing Naru-chan. Messy.

Despite the fact that this episode was made by the horrible, horrible Ass-Grade studio, there’s a lot of charm to this episode, despite it’s less-than-stellar animation. Sadly, this is all tainted by the deeply troubling ending, of which more to come.

Naru ain’t good. We’ve been a couple of episodes without her, and since that time she’s apparently been brooding over the fact that the man she loves (Nephrite) is a fucking loon. Quite frankly, she looks constantly on the verge of crawling up into the fetal position and sobbing, which only seems to mildly concern Usagi.

She’s more interested in Princess Diamond, who is planning a public reveal of the Diamond Kingdom’s greatest diamond (points for originality, writers), alongside throwing a massive piss-up at the embassy. Naru reveals that she’s going since her mum owns a jewelry store (??? seems like a good enough reason as any I suppose).

Queen Beryl has apparently been reading the news on Princess Diamond too (either that or Umino has been gossiping like mad), and thinks that this Legendary Secret Treasure might be the Silver Crystal that Zoisite’s been looking for. Incidentally, the Japanese name for the crystal is “Ginzuishou“, which I’ve always loved, so I may slip that in from time to time.

Zoisite is all set to go ruin the Princess’ day, but Nephrite appears and completely cockblocks the effeminate lieutenant, spewing some nonsense about the Earth being his jurisdiction. This sounds like bullshit, and everyone seems to think it’s bullshit, but Beryl gives her blessing. Zoisite is understandably confused by this decision, but Big B seems to think that Nephrite works better under pressure, which is exactly the same reason I gave for starting my university dissertation the night before the due date.

The reason for Beryl’s interest in the Silver Crystal is rather intriguing – “With the power of the Ginzuishou we shall revive our great ruler!” or so she says. First up, it’s weird that a Queen would have a ruler. Second, this great ruler is only ever vaguely referenced in this series – the nature of this absent autocrat is only revealed in the Sailor Stars series, which is, oh I don’t know, about 143 episodes away?

It’s at this point we also see a brief, uncomfortable scene of Zoisite crying in the lap of a dark mysterious fellow, who he calls “Master Kunzite”. If you haven’t realised it by that title, and the way Kunzite is stroking Zoisite’s head, these guys are lovers. 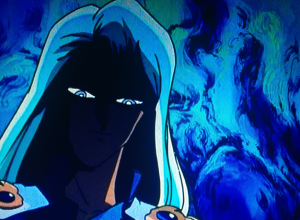 The only man with hair greater than Nephrite

We have to get into the topic of a homosexual relationship in a kid’s show about transforming pretty girls some other time, I could (and might) write an entire essay on the topic.

At Hikawa Shrine, Luna is also interested in Princess Diamond and the treasure, thinking that she may just be the Moon Princess she’s been “looking” for (I have seen her look nowhere), and the girls decide to go hang around the embassy on the night of the reveal to see if they can gatecrash.

Usagi decides to circumvent all of this by planning to use the Luna Transformation Pen to sneak into the party as a “princess”. Quite why she needed to try out the disguise the day before in the living room is beyond me.

The Transformation Pen appears to add cleavage too

Meanwhile, inside Mamoru’s brain, Tuxedo Kamen is having a dream about a rather familiar silhouette demanding a “Ginzuishou”, and thus Mamoru now thinks that he’ll turn up at the embassy party too.

This is going to get messy.

“WHYYY am I so awesome?

Usagi does as promised and sneaks into the party, which is actually a poorly animated masquerade ball. It looks pretty fun, if stuffy. Nephrite, cunningly disguised as a twat with a pink eye-mask, spots Naru, and begins to have… dark thoughts.

And they begin to dance. Usagi notices this. If you remember last episode, Ami recognised Masato Sanjoin as he was speeding down a street in a sports car, and miraculously realised he was Nephrite. Usagi seems completely fooled by the strip of pink plastic Nephrite wears on his face, and merely thinks how lucky Naru is.

Usagi is SO perceptive.

This is sensitive stuff I’m going into here, but I can see some clear rape allegory here. Perhaps it’s just the show’s attempt to deal with the issue of young girls being taken advantage of emotionally by men, but it comes off super rapey, especially in the next scene.

Naru is completely besotted by Nephrite, thinking, absurdly, “I don’t care what happens to me anymore.”

This can only end well

As if to compound this rather inappropriate allusion, Naru closes her eyes, expecting a kiss, and Nephrite put his shadow inside of her. Clearly they needed to show Nephrite possessing Naru, but having a malevolent spiritual form of himself physically enter her seem unnecessary, even slightly fucked up. Naru is thus either seriously emotionally abused at best, and at worst violated by Nephrite.

NO MEANS NO NEPHRITE

I can’t imagine either of the other two studios writing or animating this scene. This could only have been a product of the weirdos at the Ass-Grade studio.

Am I looking too much into this? I don’t think so. It would be completely overlooked by the kid audience of Sailor Moon, and I don’t think I ever realised the extent of the creepiness until this viewing, but the signs are all there.

I can’t judge the show for this, though. It’s Japan, in 1992. The writers may have been trying to deal with a serious issue that remains as pertinent today as it was then. The topic of abuse being suggested in Sailor Moon is, in fact, sociologically and anthropologically interesting. The fact that the whole thing is, as I’ve said near a dozen times so far, distinctly creepy.

And on that note, back to the episode.

Herp derp. Seriously, I hate what they do to him in this episode

Usagi is feeling lonely. Apparently looking like a princess means nothing if you don’t have a partner. Luckily, Tuxedo Kamen asks her to dance. He seems to have drawn a parallel between his “dream princess” and Usagi is disguise, although he has no idea it’s her, because MAGIC.

Nephrite’s plan from here on out is terrible. As Naru, he barges into Princess Diamond’s room (she looks like Umino for some strange reason), acting all cutesy [shudder] and buddies up to the princess. 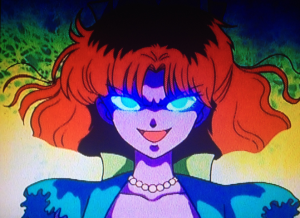 “Oh she seems interesting” – actual line from the show

The princess seems completely fine with this freaky purple girl, which is unfortunate since Nephrite immediately jumps out of Naru and possess the princess.

See, this is why you don’t make friend with purple strangers

Now the princess is on the loose with the legendary treasure in a box. Usagi goes to stop her throwing the box down to Nephrite, and somehow falls off the balcony. She’s caught by Tuxedo Kamen, and they do the whole “I can’t hold on I’m slipping!” routine, while Princess Diamond slams repeatedly into Tuxedo’s bum.

And then, uh, this happens:

Tuxedo clearly making the most of the situation here

This was actually cut out of the American dub if I remember correctly, because it would’ve encouraged kids to jump off balconies with umbrellas. Which it totally would have.

How is it breaking their fall? How is Usagi holding on with the weight of Tuxedo Kamen? Tuxedo Kamen has also appeared to jump higher than the entire building, so why does he need to hold on to her? Whatever, this is the bad studio, you’ve got to put up with crap like this.

Nephrite runs off, and Ami takes the chance to grill Tuxedo Kamen, who admits that he doesn’t quite know who he is or why he helps them or even what’s he doing (he might be high). He darkly informs them that he might, in fact, be their enemy, since he’s after the Silver Crystal. That’ll never happen, right?

“Answer me or I’ll BUBBLE YOU.”

Nephrite has one last go: hiding by some bins, he takes control of Princess Diamond once again and runs about in a dress for a bit. His “spirit” pops out, gets beaten up by the Sailor Senshi (even Bubble Spray seems effective against him, he’s not on form today).

The Princess is fine until Luna freaks her out by talking to her, Naru seems bewildered and in emotional agony but whatever, and it’s revealed that the “Legendary Treasure of the Diamond Kingdom” is just an ordinary unmagical 2000 karat diamond. 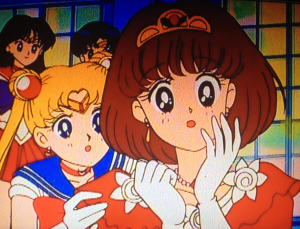 At the end of this episode, Usagi goes back to the party and drinks some “juice”, which is really “alcohol” and gets obviously intoxicated.

I’ve never been this happy to be drunk in my life. Maybe I’m doing it wrong

It’s at this point that Tuxedo Kamen decides to get his freak on, leading her outside, away from prying eyes (and witnesses) and props her up against a pillar. This, I think, is meant to be “romantic”.

Now she’s nearly completely unconscious, Tuxedo Kamen goes in for the kill, and that’s how Usagi has her first kiss.

WHAT. THE. ACTUAL. FUCK.

She can’t give consent. That’s total date rape, Tuxedo Kamen. I can’t believe they gave such an important moment in the Sailor Moon series to the worst studio! It’s outrageous that what could’ve a romantic, charming moment was turned into this.

Is it uncomfortable as hell as an adult in 2013 looking back at this episode? Why yes, yes it is. There is enough in here to keep you interested, I actually rather like the disturbing relationship between Nephrite and Naru at this point, but it’s a messy, weird episode.

Thankfully the series gets really really good from here.

Evil Plot Score: 1/5 (Nephrite just made it up as he went along)