Alternative Title: “I Am A Champion LOVELY PUNCH!” 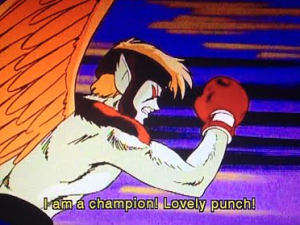 Hey it’s Naru-chan! We haven’t seen her for, like, an entire week. Old Misery-Guts is all depressed over Nephrite being speared to death right in front of her eyes, and Usagi is determined to cheer her up, with the help (?) of speccy-git Umino. They decide to go to the graveyard in Yokohama (???). Unfortunately, the next Rainbow Monster just so happens to be the priest tending the graves, and Zoisite turns up to vastly improve Usagi’s day out.

This is the last episode in the series with the original opening and closing. We’ve discussed how amazing Heart Moving is previously, so let’s all shed a tear one last time before it gets replaced by the awful awful awful Princess Moon ending.

Despite this episode coming from the dodgy studio (or the Ass-Grade Studio as I dubbed them, a name which I regret) this is actually a rather enjoyable episode. Some great slapstick and a couple of interesting developments are interjected with clumsy exposition and flashbacks, but it’s a solid episode.

And the monster-of-the-week… Oh we’ll get to him alright.

Tuxedo Kamen is in that foggy dream again, with the annoyingly repetitive and rather familiar princess-silhouette. She keeps asking for the Silver Crystal, which to me sounds like slang for meth, and Tuxedo Kamen has literally no fucking idea what the crazy bitch is talking about.

Mamoru wakes up looking awfully shifty (he ay have had some sort of nocturnal emission) and ponders whether or not he’s Tuxedo Kamen.

Straight to the Dark Kingdom, we get a rather perfunctory scene of Zoisite using the Dark Crystal to identify the next holder of a Rainbow Crystal. In case you forgot, or didn’t care, the Legendary Silver Crystal was broken apart to seal seven powerful monsters away as peaceful humans.These crystal shards are known as Rainbow Crystals, and Zoisite is attempting to reconstruct the Silver Crystal and resurrect the Rainbow Monsters in one fell swoop. 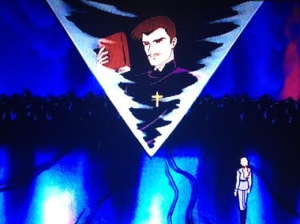 “Oh this guy looks like a barrel of laughs. Can’t I skip this crystal?”

At school, Usagi is rather concerned. Naru-chan hasn’t been in class since her old-man lover got stabbed to death, which is understandable. I like how the gold-standard for health in Japan is whether or not you manage to drag yourself to school.

That guy is on so much coke

We then get the entire fricking death scene from a couple of episodes ago. This cheapens the emotional experience in my view, and reeks of an attempt to eat up air time. Grr! I’ve made my peace with Nephrite’s death already, I’m so over that GAWD.

“You’ll forever associate chocolate parfait with death. That is my final gift, Naru”

Usagi plans to check up on Naru, and decides to enlist Umino, which is the worst fucking idea she’s ever had. There is no way this insensitive turd is going to make good company. As soon as the suggestion leaves her mouth, Usagi seems aware of her mistake. 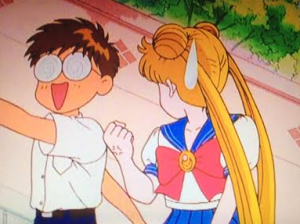 In Naru’s room, Umino continues to put his foot in his mouth by suggesting that Naru had her broken or something (Usagi punches him in the head), then suggests that they all go out for a chocolate parfait (Usagi rubs his face in the carpet, which is a lot less sexual than it sounds.) 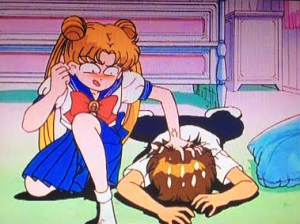 I love the awkward slapstick here, it works really well throughout the episode in that typically Japanese sort of way.

Surprisingly, Naru seems to warm to all this, and suggests they go out for something nice to eat.

MEANWHILE over at the Hikawa Shrine, Luna is giving a lecture to Rei, Ami and Makoto about all the crystal malarkey, which illicit the third protracted recycled footage of the episode in about 9 minutes. I’d normally be irritated by this, but any opportunity for this studio not to draw can only be a bonus.

“Usagi’s not here, this seems like a good time to divulge a large amount of information”

Luna explains that the Crescent Moon Wand (“Moon Stick” as its really called, thank you creative translators) is a homing beacon for the Rainbow Crystals. Rei abhors the idea of Usagi being made the leader, and of giving her such an important item, suggesting that she’ll use it as a hammer or something. Ami thinks that’s absurd.

Thus begins a little power tussle between the Senshi, sans Usagi of course. Luna wants to others to recognise Usagi as the leader, as she believes in her (although she usually doesn’t express this very well), but Rei’s being her usual bitchy self. Ami begins to show confidence in Usagi but…

That’s the face of a psychopath right there

More slapstick. I love this horrible little torture Rei performs here. Although I should hate her for it, I actually find it hilarious. In fact, I judge Ami for giving in so easily to Rei’s coercion, which is really quite atrocious of me.

Finally, Makoto declares that she doesn’t know enough about Usagi to decide one way or the other yet, so decides to call Usagi over to join in the discussion. The news that she’s in Yokohama eating duck is welcomed with incredulity. 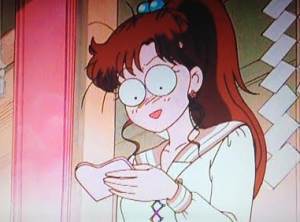 Come on, guys, she’s helping her grieving friend who has been attacked by the Dark Kingdom 11 times so far. Give her a break.

So what fun adventures are Usagi, Naru and Umino having in Yokohama?

They go straight to the graveyard. Add “Event Planner” to the list of future careers that Usagi should definitely not embark upon. I mean, Jesus Christ, a fucking graveyard. 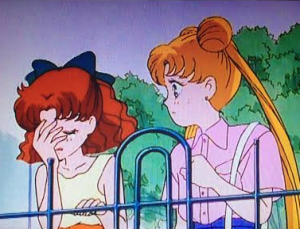 Umino feels the same way, asking why they’re not in China Town eating Peking duck, of which he has never partaken of. There’s no way of telling whether his attitude is affected to lighten the mood, or if he’s really this autistic (sorry autistic guys reading this), but it provides just the comedic relief needed to get the episode away from Naru’s moping.

I think he might get off on this, which disgusts me in a way I had never suspected

Naru runs into the graveyard, up to a Catholic (maybe) priest roaming the grounds (which is a little weird). She asks for advice on her grief (yet another flashback) and breaks down a teensy bit.

He’s your typical Japanese stereotype of a Christian (which is to say, he’s full of vague bullshit). Now, I want you to remember this: the Japanese word for “priest” is “Bokushi”, got it? Very important you hold on to this piece of information.

Anyway, the priest is all like “Turn around and you’ll find Love” which is weird, because when Naru turns around and says “Love?” — oh my god it’s Zoisite.

WHAT ARE THE ODDS?

Even Zoisite seems a little confused at Naru’s coincidental appearance at his next target.

Still, he manages to be pretty menacing here, as Naru remembers how Zoisite ordered Nephrite’s death (flashback #5 I think?)

Usagi is looking for Naru when her bag starts flashing. Luna runs up to her and explains that a Rainbow Crystal is nearby. This means that Luna got from Tokyo to Yokohama in like 20 minutes. That’s pretty damn fast for a cat.

Usagi uses the flashing Moon Stick like a hot-and-cold meter to locate the face-off between Zoisite, Priesty and Naru. Luna recommends waiting for Makoto to turn up (so would I, Sailor Moon is just awful by herself) but Usagi can’t swallow that pill and transforms to rescue Naru.

This is all ineffectual, of course. After her entrance Zoisite transforms the priest anyway and the Rainbow Crystal goes flying through the graves.

The monster that appears is AMAZING and I say that only partially ironically.

His entire persona is based upon the fact that the Japanese for “priest”, “bokushi”. sounds a bit like “boxer”, and thus the monster “Boxsy” is born. Look at this wonderful freak:

All in horrible English. WOW!!!! Also why are there ankhs on some of the graves?

I love how shitty he his. His attacks are all accompanied by screeched and terrible English, such as this one:

This is how I exchange greetings with strangers too

The bell on his belt is a nice touch. Sailor Moonis not keen on fighting this guy for obvious reasons. He begins blasting the graves with his Lovely Punch, then announces fairly blasphemously that he’s “the King of Kings”.

BRILLIANT. Where have you been all my life Boxsy?

He fires a punch at Naru (because she’s noisy), and Umino dives in to rescue her. If you look past his face and his personality, he’s actually a hero! Oh god you can see where this is going can’t you?

Just to piss everyone off, especially Zoisite, Tuxedo Kamen turns up to save Sailor Moon (or so we think).

As Tuxedo Kamen is jumping around like a prat, Sailor Moon notices that he’s dropped a kitschy star-shaped pendant on the floor and LIKE A FUCKING THIEF she pockets it.

Sailor Jupiter turns up and is next to take on Boxsy and his Lovely Punches. She’s as awesome as always. Here’s a picture of her mid-transformation, just because I love her. 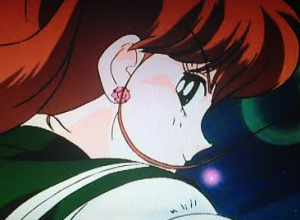 Her AMAZING Supreme Sundae attack gives Sailor Moon enough time to Refresh Boxsy with her Moon Healing Escalation (can’t get over how brilliant that attack name is) and… something rather odd happens.

Last week, Crane Game Joe just fell to the ground after being zapped back to humanity, but old Priesty-boy seems to have… transcended the physical form and is lifted into the 9th empyrean of God, at which point he gives His divine message to all creation:

“Have you been injured at work or in public? You may be eligible for compensation, so sayeth the Lord”

“I believe in God. Love thy neighbour.”

And then he fucks off. BRILLIANT.

Meanwhile, Tuxedo Kamen steals the Rainbow Crystal and gives a massive shit-eating grin to Zoisite. These two aren’t going to get along are they. 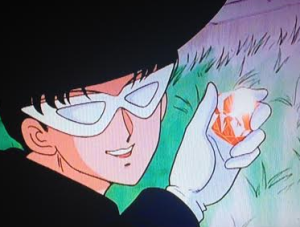 I really like the episode wrap-up. Tuxedo Kamen, holding the crystal, transforms back into Mamoru, and the two are now one! 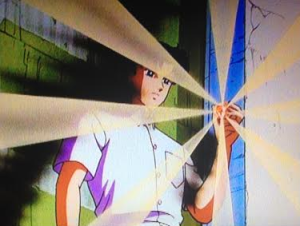 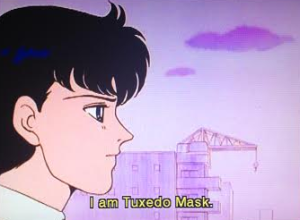 “That explains why I’m such a pretentious dick!”

OK look it’s a little lame, but I love it. The story is progressing and stuff!

Over at the graveyard, Naru is fixing up a scratch that Umino got saving her… with the disgusting blood-soaked rag she used on Nephrite and never even washed. 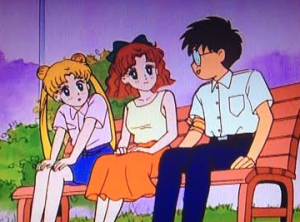 He definitely has hepatitis at the very least

Evidently she has a “type”, or should I say a “saving-her-life fetish”. Yeesh. Gross.

Usagi begins to listen to the pendant she STOLE off Tuxedo Kamen (it’s a music-box version of Moonlight Densetsu. I would have gone for Heart Moving myself) and is looking unusually pensive and cool. Luna is appologising to Makoto for Usagi being such a shitty leader, but Makoto replies that she sees that Usagi is the type of person who would do anything for her friends.

“I wonder how much this would sell for…?”

What a lovely sentiment. Makoto is so cool. Be REAL, DAMMIT.

The episode fades out, rather beautifully, on Usagi listening to the music box, and we get the last Heart Moving ending sequence. Nooooo come baaaack!

You know, this is actually a really cool ending

All in all, a clunky, watchable and touching (sort of) episode. Nice job, Ass-Grade Studio.