After discovering that (one of) the object of their affections, Motoki, has a girlfriend, Makoto and Usagi decide to step their love game up. Motoki’s girlfriend, a chemistry student named Reika, is thinking of moving to Africa to study, a fact that the girls are trying to exploit. However, it transpires that Reika, surprise surprise, is one of the Rainbow Monsters, and Sailor Moon must put aside her personal jealousy to save Reika from her monstrous fate. Sadly, Motoki survives.

There’s two major impedments for me liking this episode; 1) it’s one of those with less-than-stellar animation and 2) it focuses on Motoki, the arcade guy, and that guy can take a hike.

I have to report that, much to my chagrin, this is actually quite a good episode!

On with the episode. 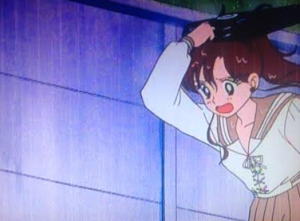 Our favourite Sailor Senshi, Makoto, is running through the rain complaining about the terrible predictive power of weather people. That’s a joke that transcends geographical location, language and time, apparently. Because she’s too busy thinking about how awesome she is, she pulls an Usagi and runs headlong into someone.

“It’s YOUR fault I wasn’t looking!” seems to be a default excuse in Japan. I’ve totally used it myself…

It’s Motoki. Uuuughhh I hate this guy with an irrational passion.

Such a romantic moment, when that guy you like knocks you down in the rain

If you recall the episode that Makoto was introduced in, she harbors a love for Motoki for the completely sane and not-at-all creepy reason that his voice sounds similar to an ex-boyfriend’s.

Mako attempts to seduce Motoki the only way she knows how – by becoming a 1950s housewife. She offers to cook and clean for him, and generally acts like a stalker. I’m not saying that she has issues, but she definitely has issues.

His favourite dish? Hayashi rice, which is brown goop. It would be churlish of me to suggest that Motoki is a fecalpheliac based upon this dish choice, but since he isn’t real and I can’t be sued for libel, he total jerks it to poop. Take that, Blondie.

After Mako leaves him, Motoki runs into this lovely lady.

“I wear this chemical-stained lab coat wherever I go, so you know I’m sciencey”

As it turns out, Reika is Motoki’s girlfriend, which makes his cavalier attitude towards the 14-year-old girls who flutter around him all the more reprehensible. She cancels the date that the two of them were set to have about that evening, then admits to Motoki that she hasn’t made up her mind about “the big decision”.

Mamoru turns up to take Motoki out for a coffee (an abundance of characters with names beginning with “M” this episode), and they discuss Reika’s indecision about whether or not to go to Africa to study. This is a bit weird, as she’s a chemist. 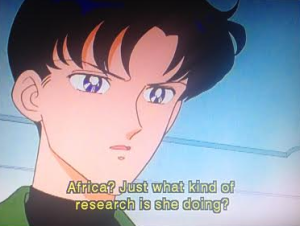 Under Mamoru’s questioning (some might call it “angry interrogation”) Motoki admits that, while he wants to be with Reika, he also wants not to hold her back.

Motoki starts going on about Mako and Usagi, calling them “cute” but “too young”. Mamoru, who is dating Rei-chan, has a reaction that’s priceless.

That moment you realise you’re a paedophile

Calling girls who ardent adore you “little sisters” is creepy, Motoki. This is even creepier when you find out in the next series that Motoki actually has a younger sister the same age as Usagi, which turns his “harmless flirting” into “hitting on girls who remind me of my own little sister”.

BAM. The complete deconstruction of Motoki as a character. Not bad work, eh?

Makoto turns up at Motoki’s house completely chipper and ready to woo. There’s a delay in him answering the door, “W-wait a second!”, which probably means that he was pulling his pants back on.

Mako finds that his apartment is completely disgusting (I’m a complete hypocrite on this fact, I admit it), and decides to clean, whether Motoki likes it or not. Mako really is a domestic goddess.

This is actually cleaner than I would have expected

In the midst of her scrubbing of the floor (I can’t believe Motoki is letting her clean his shit, what an asshole), Mako spots a conspicuous photo. 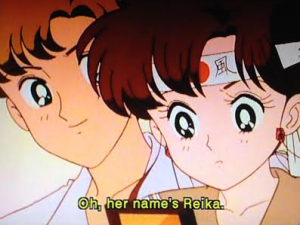 If a guy came up this close behind you, you’d shank him, right? Or is that just in prison?

The admission that he has a girlfriend sends Mako-chan in parallaxes of despair, which is simultaneously hilarious and a little sad. There’s a small glimpse of how Motoki is taking this over-the-top reaction in this scene: 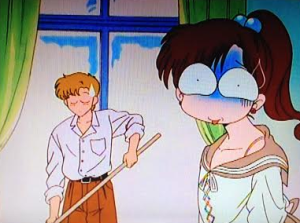 As you can see, he’s obviously aware of her distress. That means he was aware of her emotions, yet still encouraged her to come over to his house just so that she could cook and clean for him.

This, dear reader, is what you call a dirty rat bastard.

At school, Makoto is still rather down. Usagi’s cheery appearance doesn’t help much.

She’s the worst friend to have if you’re bummed

Mako explains the situation with Motoki with Usagi. After a couple of amusing misunderstandings – Usagi, dense as ever, thinks that it is she who is the object of Motoki’s affections – Mako suggests that the two of them go after the bastard, they have nothing to lose after all, and the girls commit themselves to their romantic ambitions.

Much to Luna’s distaste.

The girls go to the arcade to confess, and are instantly attacked by Mamoru undermining them. He’ actually doing a service here – he tries to tell them that Motoki only sees them as little sisters (yuck) – although he seems overly happy to be the bearer of bad news.

That creeper is your future husband. Oh, SPOILER ALERT

None of it matters anyway, Motoki isn’t even on shift.

He’s being covered by this… opium dealer…?

Outside, Mamoru tries to dissuade Mako further, but ends up revealing that Reika is thinking whether or not to move to Africa, and Makoto sees her chance. In her excitement, she crushes Mamoru’s larynx, which is just dandy.

Meanwhile, in the Dark Kingdom, we get a suuuuper gay scene with Zoisite and Kunsite. Seeing that the next target is Reika, Kunzite foolishly says that he thinks she’s beautiful. Zoisite takes this rather badly and acts moody until Kunzite gives him a rose. As a result, Zoisite now has a personal vendetta against Reika. 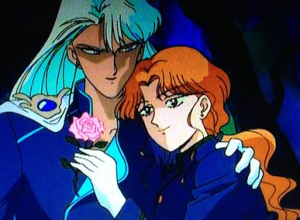 Makoto’s next plan is for her and Usagi to both cook for him (I cannot see how inviting competition over will work), and on the way Usagi has one of her crazy fucked-up dreams again. 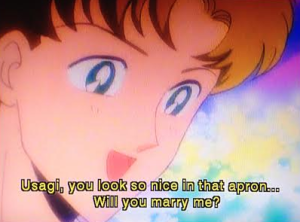 Upon arriving at Motoki’s place, Usagi continues to be a weirdo pervert by sniffing a half-finished cup of coffee.

Seriously, this girls needs to get laid.

Cooking with Usagi goes about as well as you’d expect (remember, she’s incompetent at everything), but it’s all moot as Motoki is called by Reika, who tells him that she’s decided to go to Africa after all. He rushes out of the house to see her, leaving the two girls by themselves in his apartment await his return for an entire fucking afternoon.

It’s only after the Moon Stick starts glowing that the girls get revved up – both seem to suggest that they’re transforming to go and get revenge on Motoki Bais-Moi style (my obscure reference of the day). I loved that joke.

Yeah, FUCK THAT GUY UP USAGI

As it turns out, Motoki wasn’t being a total jerk after all (well, sort of), he was defending Reika form being Crystal-Morphed by Zoisite, who seems extra-vindictive today, using fire and calling Reika an ugly bitch (guess that scene with Kunzite really stung).

We get the best moment in all of Sailor Moon to date as Zoisite fires a beam at Motoki, thankfully knocking him out cold.

Influenced by the life and personality of the human it became, the monster Rikokayder is, like, a chemistry punk or something…?

Coming to you straight out of an 80s music video

I should point out that Reika is the only one of the Rainbow Monsters so far to be without some sort of psychic power as a human – Crane Game Joe had his telekinesis, the priest seemed to be able to tell whether people ‘s hearts were good or evil (a bit flimsy that one), Ami’s pseudo-boyfriend was prescient and Yumemi Yumeno had “pretty dreams” or some junk like that.

Maybe Reika’s power is that she’s academic and hot?

The Sailor Senshi’s entrance speech is a little different today. I really wish they were a little less.. man-hungry… but it’s actually pretty funny how pathetic they are.

Rikokayder, in return, is a complete anti-feminist bitch. 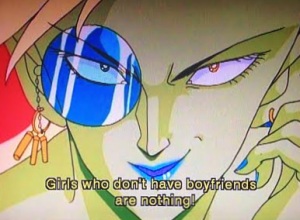 Oh come on Rikokayder, you’re letting the side down

While Rikokayder is attacking the girls with chemistry (a little like Walter White from Breaking Bad), Tuxedo Kamen turns up to fight Zoisite over the Rainbow Crystal, as per usual.

There’s a terrible moment here, it’s an attack featuring an amoeba, but it’s a bad idea and it’s badly animated too.

Sailor Jupiter’s Supreme Thunder attack is captured by the monster’s, uh, “Big Flask” attack. I suppose this was inspired by Benjamin Franklin’s experiments with the kite and the key, or the saying “it’s like catching lighting in a bottle”, or they just made up some bullshit to keep the episode going.

Either way, none of this fight is working particularly well for me. Moon and Jupiter are saved by Mercury’s Bubble Spray (you always need fog to kill monsters, guys) and Mars’ Fire Soul, which destroys the flask.

Sailor Mars has such a great moment here. 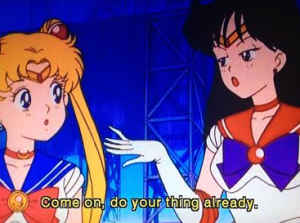 Whether or not you like the formulaic structure of Sailor Moon, you have to admire their awareness of said structure

So with Reika Refreshed back into humanity, Tuxedo Kamen and Zoisite are still fighting. Their fight looks a lot more interesting to be honest. Zoisite seems to admit defeat to Tuxedo Kamen, but throws his lame petals for a chance to run away with the crystal like the coward he is.

Zoisite or Motoki, which do I hate more…? Probably Motoki, just because the show seems to think I should like him.

In the final scene, I have a real problem. Motoki is saying goodbye to Reika at the airport, with Usagi and Mako looking on. All this is fine (if a little weird, why the hell did they go along to the airport…?) but it’s set to the instrumental version of Heart Moving. This is sacred music for me, and should only have been used at the most moving moments in the series, such as in the episode Nephrite dies. Using it here with these douche-bags undermines it a little for me.

That’s my own little nit-pick.

Other than that, pretty darn solid episode.