The Second Opening: Screw This, I’m Moving to the Moon

Today I’m going to take a look at the second opening sequence to Sailor Moon, just to keep you all in eager anticipation for the massive story development that’s about to go down in Season 1.

The second opening ditches the faux-Russian vibes of the first, opting instead for a much more fantastical and relevant-to-the-plot opening, featuring majestic and utterly alien vistas of a kingdom on the moon.

The thing that jumps out at you immediately upon first viewing is, naturally, the inclusion of Makoto and the as-yet-unintroduced Minako (SO many M-names in Sailor Moon). 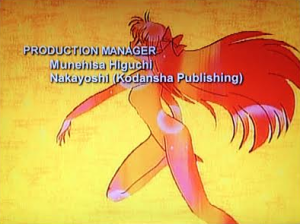 This also jumps out at you, but for completely different reasons

The second thing you’ll notice about this first opening is how little the sequence actually focuses on the Sailor Senshi other than Sailor Moon. The opening almost entirely revolves around our central heroine and some fairly big spoilers. 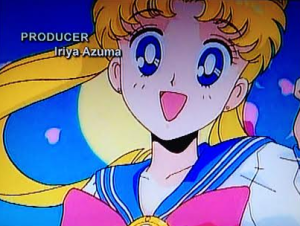 “If you hadn’t realised yet, I’M THE MAIN CHARACTER”

I question why they decided to blow the big reveal of Sailor Moon being the Moon Princess so regularly in the show, but in the end it should be fairly obvious anyway. At least they got some wonderful imagery out of not playing up the mystery. 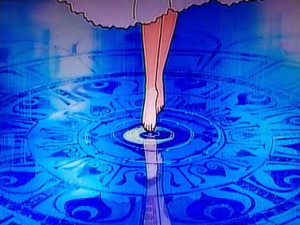 I normally hate feet, but I love this imagery

A big feature of this opening is the Moon itself, or rather the Silver Millennium – the kingdom on the Moon that doesn’t feature too much in the show, except for a fairly lengthy flashback in a few episodes. As such, it’s a pleasure to be able to glimpse the artistic vision of Naoko Takeuchi, the creator of Sailor Moon, even if it is only for 90 seconds or so.

And what an artistic vision it is. Why the hell are we still stuck here on Earth like roaches, like goddamn cockroaches?

Since this is the first series of Sailor Moon, the artists have leisure time in this opening. By that I mean they don’t have to give due time to the increasing number of characters that eventually make up the Sailor Moon cast later on. This allows them to linger on suggestive and romantic (in the literary sense of the word as opposed to the Fifty Shades of Grey sense).

I’m not going to pretend that I know anything about architecture, but I will say that the designs of the palace retain a certain element of St Petersburg that existed in the first opening, the only real artistic motif that carried over. Later, the fountain pillars (another lingering shot that serves nothing but ambiance and sheer fucking beauty) are distinctly more Palladian, and by that I mean a renaissance throw-back to classic Greek design.

That’s right, I’ve been writing about how much I love fictional fountains

It shows that the artists did their homework, drawing upon real-world inspiration to create an entirely new, entirely foreign and entirely enigmatic landscape.

For an opening sequence to a kid’s anime.

It’s touches like this that should show you why I love this show so much.

The opening begins, as the first, with creepy rising strings and ominous bells before breaking into the good old Moonlight Densetsu theme song, but the important thing to take away is how morbid and abandoned the Silver Millennium looks. The place met a tragic fate, and although they’re not going to explicitly state it in the sequence, it’s suggestive. I posit that this is intentional, forever placing the concept of the Moon Kingdom within a tragic frame for the viewer. 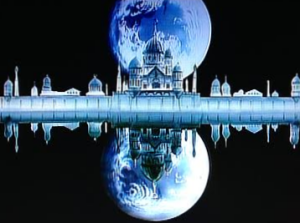 Also all the abandoned crumbling ruins are fairly tragic

The final image of the second opening ends on another suggestive image. Whereas the first opening ended on a generic Sailor Moon pose with Luna, and the openings hereafter finish featuring the entire Sailor Senshi posse (it becomes much more of an ensemble show from season 2, aka Sailor Moon R), this final shot is unique.

It retains the strange distant fantasy element of the rest of the sequence. It places Princess Serenity and Tuxedo Kamen staring at each other, separated by a good few feet, backed by an eerie washed-out silhouette of Earth and the Moon architecture once more. It’s when you realise that this scene isn’t about a superheroine posing to kick ass and take names, nor is it a romantic shot of the two embracing, vindicated in their love.

The distance says it all: this is a tragedy. The sequence is setting the characters of Sailor Moon and Tuxedo Kamen up for a fall.

But look at their slavish expressions! Young stupid love has never ended in tragedy, has it?

Perhaps, as usual, I’m looking too deeply into things, but how you interpret art is as interesting as what the artist originally intended. I’m not sure what it says about me, but I see the second opening as a measured, thoughtful, well-paced and enigmatic sequence that stands as a testiment to the show writer’s ability to construct a powerfully-emotional and non-condescending story that appeals far beyond their remit as creators of children’s TV.

BAM. Knocked it out the park again, Vince.

Stay tuned for the next episode review, featuring the introduction of the last of the “Inner Senshi”, Sailor Venus. Yay!

If you liked this, check out my ridiculous deconstruction of the first opening to Sailor Moon.