This is the first in a series of blogs looking at the Bishojou Senshi Sailor Moon manga. My original intent for this entry was merely to compare and contrast the manga with the anime in broad terms, seeing as I am far more familiar with the show. That being said, once I began reading the manga, I could not put it down.

It’s exceedingly interesting. I’ve decided to break down the volumes into two or three acts per entry. Today’s post will include Acts 1 – 3 of Volume 1.

Whereas I gave no spoiler alert for the TV episode reviews (I thought it was obvious), I will say upfront that there will be major spoilers for the manga.

It’s exceedingly difficult to get the Sailor Moon manga in print format, at least in the UK. I have myself the latest Japanese re-release of the manga series, but the English translation that I’ve been working with can be found here.

Go read, it really is worth it. Without further preamble…

Naoko Takeuchi’s manga Pretty Soldier Sailor Moon is altogether a different beast than its television counterpart. For the first arc, the Dark Kingdom arc, the TV show hits similar plot points to manga. Ami attends the Crystal Cram school, gets attacked and transforms into Sailor Mercury, Rei lives at a shrine and discovers her true identity in an incident involving a demon bus, but there’s definitely a different approach between anime and manga.

Well, sometimes not that different

The manga starts off in very much the same way as the first episode of the anime: Usagi is late for school, meets Luna, turns into Sailor Moon and rescues Naru from her own demonic mother, but already the differences in tone can be seen in the first act.

The biggest difference is that, from the start, the Silver Crystal is an object of interest. Mamoru’s inner monologue reveals that it’s what he’s looking for when hanging around outside Osa-P, Naru’s mother’s jewelry store. This moment is not only surprising in that it explicitly states Mamoru’s involvement in the supernatural events, but also that he’s given an inner  monologue at all. 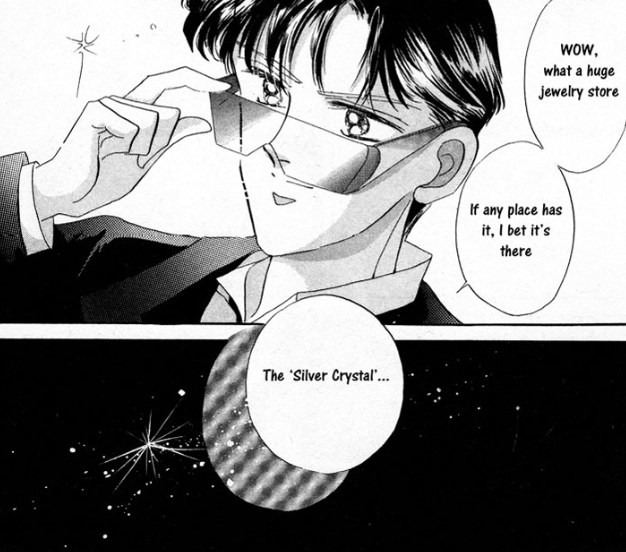 “Any excuse to go broach shopping, am I right ladies?”

From the first moment he arrives, Mamoru is altogether a different character in the manga than he is on the show. He is a character with whom you share private insight. He’s not confused or ignorant about what’s going on – he’s an agent of change, with clear goals from the beginning. He’s also much less of an ostentatious knob. (I’m kidding, TV Tuxedo Kamen, you know I love you.)

The Silver Crystal is also the motivation for the monster who takes the form of Naru’s mother – aside from collect “energy” for the Great Ruler (not Kim Jong-Un), she also chose Osa-P because it’s a potential place for the Silver Crystal to turn up.

While we’re on the subject of the first monster… There’s no overt reveal before her arrival of Queen Beryl, Jadeite or the Dark Kingdom, all who turn up next act. As such, her creepy reveal to Naru is that much more disturbing. It also helps that the monster describes Naru’s mother as “starving to death in the basement”. Charming. 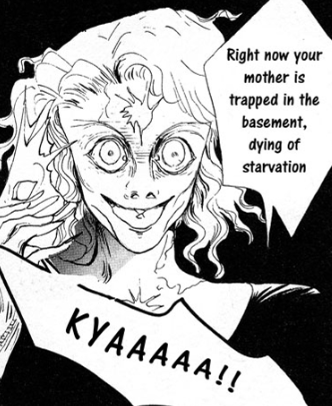 “Also I totally blocked your toilet, with dark energy… and poo.”

The biggest aesthetic change between manga and anime is Sailor Moon’s funky glasses. I actually rather like them, although she immediately takes them off after seeing a vision of Naru being attacked. They are there to mirror the pair that Sailor V wears, probably to underline their similarities between the Sailor V manga and the Sailor Moon manga.

Luna is also much more cat-like in design, with the almond-shaped eyes she had in the first episode of Sailor Moon, and which the animators only intermittently remember to give her thereafter.

Hands down my favourite bit from the first act

The other big asthetic change in the first act is the Moon Tiara Action, or should I say the Moon Tiara Boomerang. Obviously a glowing disc is much easier to animate for the show, but the end result of the attack is markedly different, and fits in with the whole “starving to death” thing:

The Moon Tiara Boomerang visibly cuts the monster in two, a piece of violence definitely not seen in the show.

This makes even less sense than the show

This extra tinge of violence, and therefore danger, will continue throughout the manga.

One last thing I’ll talk about for the first act- Tuxedo Kamen doesn’t do jack, and it’s perfect. He’s not some transforming superhero who always has to save Sailor Moon while she’s pathetically weeping, she kicks ass by herself (while weeping usually). Tux has no overt powers. He doesn’t throw roses or whack stuff with his stick. He doesn’t give condescending speeches.

“Case of the what-now? What the fuck are you talking about?”

Sailor Moon is a girl and she doesn’t need his help. And that’s really cool. Tuxedo Kamen is much the better for it – he’s aware of his limitations, seeing that he’s just a human who likes to dress up and prowl the streets in a top hat, and is therefore humble about it.

I understand it was necessary to bulk him up for the show, perhaps for little Japanese boys to identify with while all the miniskirt-clad women were running around, but they lost a certain likability about Mamoru in the process. JUST AN OPINION.

Act 2 is the introduction of Ami and Sailor Mercury. You’ll have noticed that there’s no filler episodes, as in the anime. In a way this keeps the narrative brisk, as a manga needs to do to keep interesting. From another viewpoint, however, the show did a much better job at helping you connect with these characters. We spend so much time with Usagi in the anime that her character is far more robust than the manga by the point.

We also have the introduction of the Dark Kingdom and Jadeite in particular, who describes himself as the “General presiding over the division of the Middle East,” which may seem superfluous, but I’m going to bring up each of the General’s idiosyncrasies, since I find their differences between manga and anime forms extremely intriguing.

“I’m also the Operations Director of the Catering Division.”

Ami’s character is different from the anime, both in design and personality. She feels more mature, more independent. There are a few looks she gives while figuring stuff out that says “this girl can get shit done.” I like that she’s less demure here than the show. 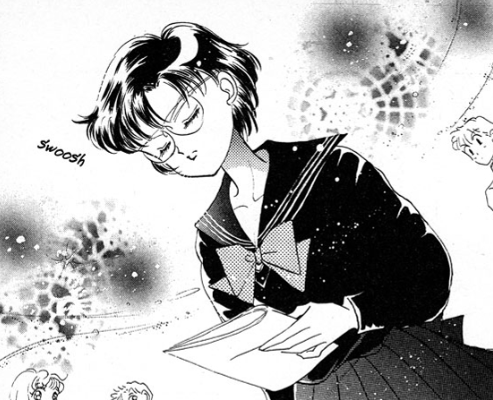 Look at all the snoot! Soooo snooty. Also, those glasses kick ass

Ami gets her Transformation Pen from one of the arcade machines after she plays it, instead of directly from Luna, which seems weird at first, but it’s a point I’d like to return to later. 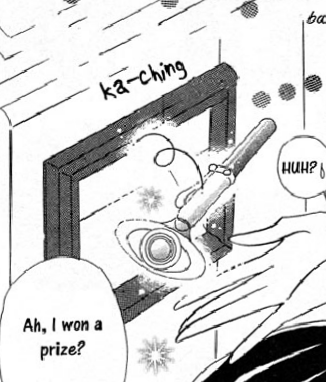 This is pretty convoluted for Luna. In the show these pens just fall out of her bum

The evil plot behind the Crystal Cram school is, once again, not merely about sucking energy – by enslaving bright young minds, the Dark Kingdom is pumping extra resources into researching the Silver Crystal. It’s little moments like this when you realise that the bad guys can be given far more credit than in the TV show. They’re not mindlessly mining for energy, they actually have rather clever schemes, something that gets lost in transition to TV.

Tuxedo Mask appears again, and this time he gets involved – but not to take over the duty of Sailor Moon – he lifts her up so that she can perform a flying Sailor Moon Kick to the monsters face. Two interesting points about this – Sailor Moon is much more physically involved in fighting in the manga, and Tuxedo Kamen is supporting Sailor Moon rather than taking over for her. The manga is even better at early-90s feminism than the show!

Act 3 is Rei’s act, and probably introduces the largest number of differences between show and manga. As a first-time reader, I was struck by the fact that I was no longer exploring merely a different version of the story I’ve seen on the anime, but that I was reading an entirely different story.

It opens in the Dark Kingdom, which looks completely different. Much more Palladian in design, very much like the Moon Kingdom. We’re also shown Queen Beryl, Jadeite, Nephrite (“General presiding over the North American territory” apparently) and Zoisite, all interacting. Moreover, they all seem to like each other. It’s so freaky seeing Zoisite being nice to Nephrite, or anyone at all paying attention to Jadeite.

So weird that they’re not all stabbing each other in the back, both figuratively and literally

I understand the show wanted to take things easy, cherish their assets and bring them out slowly, and it worked well, but they missed a real trick by separating the Great Four out.

It’s a dynamic that we may very well see in the Sailor Moon reboot coming this July, and I think it could be a real selling point, a real justification for any reboot at all, if they nail the relationships between the Great Four.

The manga doesn’t do this brilliantly, however. Jadeite, Nephrite and Zoisite are all rather interchangeable, speaking with the same voice. As such you don’t get the great individualism that the show brought.

Rei is just as good as ever, but, like Ami, is rather more mature and reserved than in the show. We’ll have to see how her character develops as the manga goes on, but I suspect that it might be different to anime-Rei. 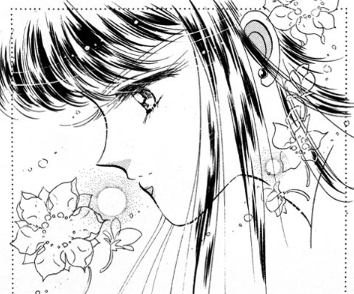 So, the biggest changes are coming up.

First, Mamoru. What the fuck. I love this.

Never take them off. NEVER. Also their resulting relationship feels so much less weird when he’s, you know, looking a little younger

Usagi (not been talking much about her, she’s far less interesting in the manga as of yet) starts falling in love straight away, instead of the 30-odd episodes of bickering that the show had. Both of them also immediately suspect the other one’s secret identity.

People are actually not brain-dead in the manga

The next big change occurs with the Demon Bus that was seen in episode 10 of the anime. Jadeite is driving this time (not the big change), and Usagi still has to transform into a bus attendant to find the courage to board the bus. This time, however, Tuxedo Mask actually witnesses Usagi transform into the bus attendant, and obviously his suspicions are raised.

In the scene immediately after this, Luna proceeds to bite the shit out of Tuxedo Kamen, which is perfect. She’s so ungrateful.

Thing are happening super quick. I like the slow build up of Sailor Moon season one, but it is refreshing to have everything happen so soon. A little shocking, as a matter of fact.

If that weren’t a big enough deviation between the manga and show, the enemy that Rei, and Sailor Mars, first fights is Jadeite. Sailor Moon traps him using her tiara, and Sailor Mars fucking burns him alive.

It’s messed up, mainly because Naoko Takeuchi seems obsessed with drawing horribly disfigured and charred remains. Blimey. Poor Jadeite. No Eternal Sleep for you this time!

It’s also surprising to see Nephrite and Zoite expressing disbelief and anger at their comrade’s death, which is something I really shouldn’t be surprised about but there it is.