Continuing the series of blogs looking at the Bishojou Senshi Sailor Moon manga, today I’m looking at the Dark Kingdom arc Acts 4 – 6. As usual, it’s mostly comparing and contrasting with the anime series, as well as brief discussion on anything else I find interesting.

There’s some preeeetty interesting plot developments in these acts.

Continued after the break.

Just a reminder before we start, although I highly recommend purchasing the Sailor Moon manga in good old analogue format, I understand that it’s rather impossible to get in certain regions. As such, you can find the digital English translated copy of the manga over at this website.

The analogous anime episode for this act is Episode 22, and while they are very similar, the anime echoing a number of scenes from the manga, here we have an act of markedly different tone. This is because of the lack of relationship between Naru and Nephrite.

Admittedly, she does seem a lot happier here

Nephy-poo, everyone’s favourite General in the show, is somewhat shafted in the manga. He’s essentially a stock-replacement for Jadeite. For a story arc of such strength in the anime of Nephrite’s emotional transformation, and sacrifice for his love Naru, I was surprise to learn that it didn’t exist in any form in the manga.

As a result, everything going on here is a little less interesting.

My favourite part of the act is Rei’s reaction to having realised that she is a Sailor Senshi – she cannot be bothered to go running around looking for a Princess. I really enjoyed how haughty she looks. 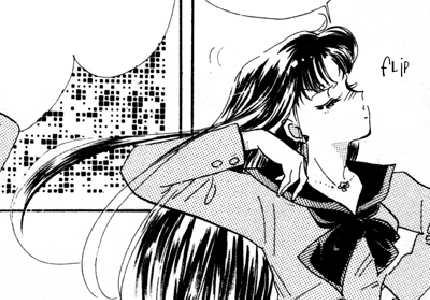 I love her attitude but, again, not enough of it in the manga

One creepy-ass moment can be found in the Dark Kingdom, where Nephrite is mourning Jadeite (in the anime he could not possibly have cared less). The disturbing part is that they seem to have recovered Jadeite’s charred remains after his lethal fight with Sailor Mars.

Moreover, it’s lying in state, in a goddamn glass cabinet, like Stalin if he looked like KFC.

“…Mmm I could really go for a Zinger Burger meal right now.”

The manga plays out the masquerade ball at the Diamond Kingdom embassy as the anime did – there’s the transformation pen, the masked dancers, the spilled drink and Usgai being spotted by Mamoru. It plays out differently when he notices that she’s dropped a handkerchief and, lo and behold, it’s got Usagi’s fucking name on it. That’s some good undercover work.

There’s this weird bit where Sailor Moon tries to use Moon Tiara Boomerang, but can’t because her tiara burnt up along with Jadeite. Suddenly, a new one appears on her head. This doesn’t go anywhere, doesn’t seem to mean anything, and just seems like a weird, unnecessary addition.

At the very least the new tiara gives her a new attack – the Moon Twilight Flash, which actually looks pretty cool, as it harnesses the light of the Moon. It must be completely useless on a cloudy night or at the New Moon though. 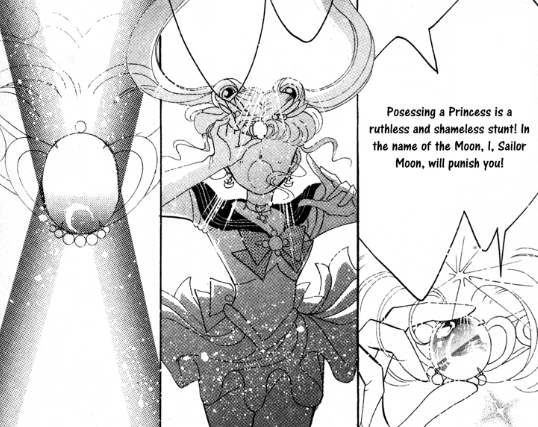 This is a rather cool sequence actually

In the final scene, as in the anime, Sailor Moon gets plastered on cocktails after the fight with Nephrite’s shadow, and Tuxedo Kamen takes advantage of her on the veranda like a goddamn rapist.

This time, however, in a hilarious move, Luna tells Tux to back the fuck away from Usagi. She asks him if he’s an enemy (clearly he is, he just molested an unconscious 14 year old girl), and his admission that he doesn’t know if he’s their enemy or not actually sounds humble in the manga, as opposed to the show where it sounded like hubris.

Yaaaay Sailor Jupiter is here! That was much quicker than in the show. This manga moves at an incredibly brisk pace. Her entrance is quite a bit different than in the show, in which she beat the crap out of some guys harassing Usagi. Here she saves her from being hit by a car, but it’s just as good, if not a little unsatisfyingly bloodless.

The rest of this act is sooo different. There’s no Rainbow Crystals, no Crane Game Joe, there’s just a weird bridal succubus.

At school, Naru is showing the girls in class a picture of her cousin in a wedding dress. She’s super happy about it. 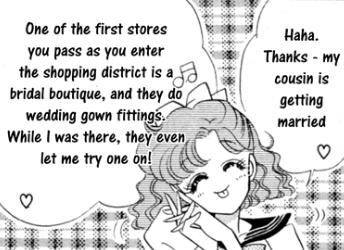 She’s in such a great mood…!

Then she suddenly flips mood entirely and reveals that her fiance has been missing for days. Holy frak what happened here? Seriously, no one seems to be concerned about this guy, nor for Naru’s cousin who is apparently so depressed she can’t get out of bed. 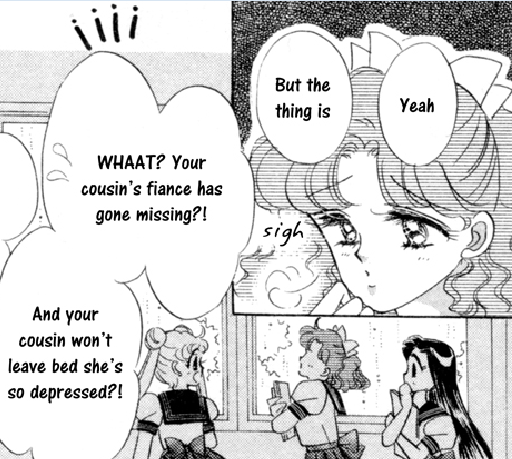 “Yeah but enough about that, let’s talk about our dream weddings!”

Such as when Motoki, the arcade guy, meets Makoto and thinks how all of Usagi’s friends are really sexy. 14, dude. They’re 14. 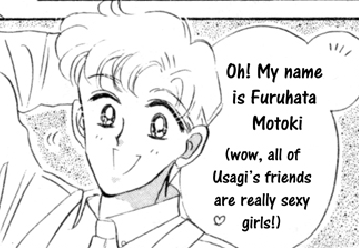 I wonder which version of Motoki I dislike more…?

Nephrite’s plan to gather energy for Queen Metalia is by using a wedding mannequin that hangs over a store entrance to leap down, entice people and suck their blood. It’s really weird.

Makoto, still unaware that she’s a Sailor Senshi, is passing near the shop at night when she’s approached by a fake, evil Motoki (it’s the mannequin), and she quickly succumbs to his charms. It’s a little horrible, actually. Didn’t like it at all.

Mamoru notices this and, because he has literally no powers and dresses up in a costume for shits and giggles, goes to fetch Sailor Moon. He leads Usagi from her room into town to where Makoto is being attacked. I like this version of Tux waaaay better than the obnoxious guy on the show (STILL LOVE YA TUX), it allows Sailor Moon to remain centre stage, a strong female protagonist.

I cannot make enough comparisons to Buffy the Vampire Slayer season 1. Hopefully her won’t pull an Angel and put on 80 pounds for season 2.

So, Usagi’s briefly a dude (yes really), just to throw off the fake bride for a second, and then Makoto transforms into Sailor Jupiter!

Her first appearance in the manga has got to be as memorable and kick-ass as the show, right?

Well, if by “memorable” you mean that she electrocutes Nephrite to death then yes, it was rather memorable. He ends up looking like the Colonel’s Original Recipe Chicken just like Zoisite, in a comparison that leaves me unable to ever consider eating KFC ever again. 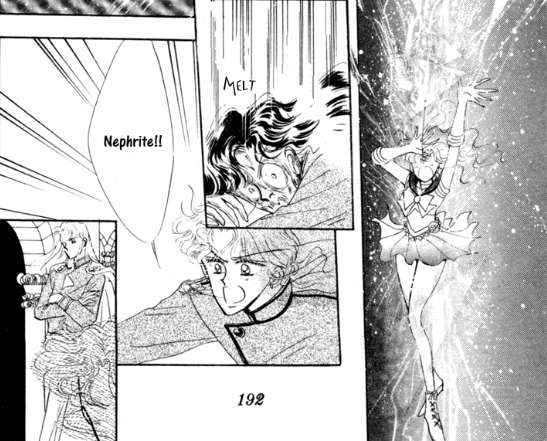 “NEPHRITEEE… Oh wait, what am I upset for, I hate that guy.”

This is so far removed from the anime at this point.

The most shocking this about all this (other than the cold-blooded murder of a beloved character) is that Zoisite, monitoring the fight, is appalled at his death. That’s quite a different reaction from last time, Zoisite.

At the end of the last act, Luna made a gift of the Moon Stick to Sailor Moon, instructing her to be a leader. Whereas in the show the characters question everything that happens, and express curiosity at the odd happenings in their life, the manga characters are all very accepting of the crazy stuff going on. As a result they feel a little unreal, but maybe that’s because we spend such less time with them all.

First up, sexy topless shot of Mamoru after he has those funky dreams.

Usagi and Luna are shocked to find a piece in the morning paper on Tuxedo Kamen, how he’s looking for the Silver Crystal, and his admission that he’s resorted to crime in his attempts to find such a valued piece.

At first I assumed that the piece was planted by the Dark Kingdom for some nefarious purpose. As the act develops, however, you find out that – nope – Mamoru put it in the paper himself for no real reason. Solid motivation there.

The piece in the paper starts a media frenzy, with everyone looking for the Silver Crystal, and Zoisite, now in charge, decides to use television to both search for the crystal and zap energy in a single go. It’s quite a good plan, actually.

There’s one sliver of a suggestion that Kunzite and Zoisite might be having a relationship, and nothing more. This means that their relationship in the anime was invented for the screen, which makes me even more impressed that they decided to run with it. It wasn’t out of duty to the source material, it was a conscious decision to place homosexual characters in to the show and make their relationship overt. Nice one, anime. 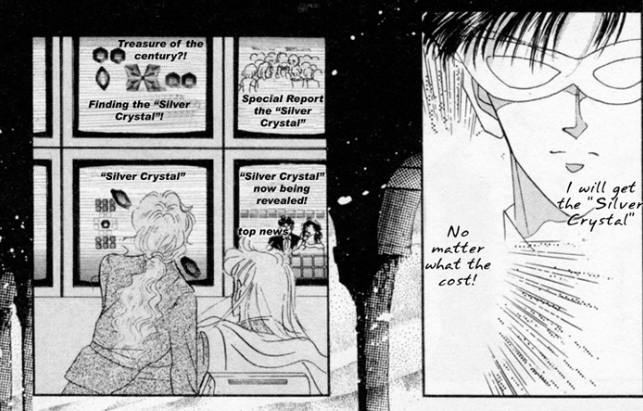 Here, see how he sort of leans in to Kunzite a little? Do you reckon that’s all their anime relationship was based upon?

So… Jadeite cross-dresses again. He goes on TV in horrid red lipstick and begins hyping up the Silver Crystal, claiming it has powers of immortality and generally sending everyone into a frenzy. Again, WEIRD. I’m all for cross-dressing, but this is so random.

“I’m sorry Professor, I wasn’t listening, your face was too off-putting.”

Finally, thankfully, he zaps all the energy from watchers, but thankfully Mamoru is spared because he’s the bookish type. He is, in fact, a real nerd, something I like very much. In 1992, there weren’t many idolised men in Western media who were bookish.

Luna decides to bring Ami to her “secret lair” to find out the cause of the energy-sucking, and this is really rather cool. The game arcade is the entrance to Luna’s lab! The cabinets move apart and stairs appear leading down. 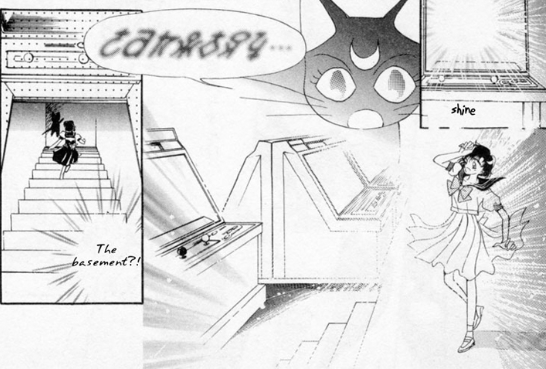 The anime missed a real trick with this one, I think. Instead they made the supercomputer miniature and slapped it on Sailor Mercury’s face.

It sort of reminds me of every 1980’s anime headquarters (i.e. Voltron), but in a good way

They find out where the signal is coming from and, hey presto, it’s sodding Tokyo Tower. A common trope in manga and anime. I can see why they avoided it in Sailor Moon… up until series 3 anyway.

There’s a great moment where Tuxedo Kamen, slapping Usagi awake after finding her energy-less and unconscious, decides not to make out with her while she’s asleep again, and begs her to do something about the evil signal. He admits her can’t do jack without her. It’s a fabulous moment.

…but then he gets all touchy feel after Sailor Moon uses Moon Healing Escalation on all the injured people of Tokyo. It’s creepy.

He carries her off, and she wakes up…

…in his fucking bed. You need to get out of the house straight away, Usagi. Remember, keys can be used as a weapon in a pinch.

After Usagi finds Mamoru’s pocket watch (it’s such a better design than in the anime, where it looks like a toy), she gets up to find that Mamoru is, in fact, dressed up. The big reveal between the two of them happens so mundanely, in his apartment. 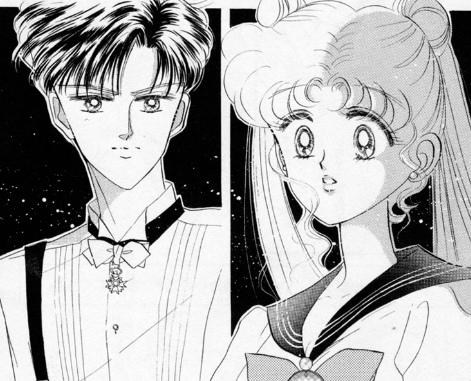 Such a change from the anime, where it was a massively dramatic deal.

One one hand, I like how pedestrian it is. It’s so straight-up, no faffing around, I’m Sailor Moon, you’re Tuxedo Kamen, that is that, but I do like my melodrama too.

And that’s the end of today’s blog. Come back soon for the next few acts of the Dark Kingdom manga arc, or check out the first three acts reviewed here.