The penultimate in a series of blog entries looking at the first story arc of the Sailor Moon manga, the Dark Kingdom story. I’ve been looking at how the volumes stand up against the anime, as well as enjoyable they are by themselves. If you’re not up to date, I recommend catching up on the previous blog entries.

If you remember from the last act I peeked at, Mamoru has been resurected as the evil Endymion, very much like the anime in Episode 36. This is preeety important to the act.

Usagi is still bummed over the disappearance of Mamoru, which is understandable as her memories of loving him in a former life has surfaced. The way she is dealing with this is, understandably, to stay in bed all day. That’s how I deal with problems anyway.

Hugging a cat also works wonders, if you can catch them

She’s a little concerned that the Ginzuishou (Silver Crystal) has lost its light after its first dazzling appearance. It’s been turned into a necklace here, and looks a little silly to be honest.How would you even get it onto a chain?

Evil Endymion, meanwhile, has stopped in front of the arcade and just stands there like a weirdo, which naturally engenders Motoki, who works there, to question this freak. 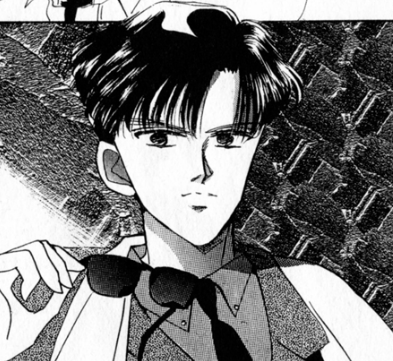 This next bit gets a bit confusing. Endymion finds out that Motoki works at the arcade, uses eye lasers to… I’m not 100% sure, but I think he totally kills Motoki’s friend from university, then brainwashes Motoki so that he recognises Endymion as this newly-deceased friend.

Well that’s one way to infiltrate an arcade. How about just going inside first?

Oh maaan I hate Motoki, and now he’s a part of the storyline? Maaaan…

So what’s Endymion’s master plan in the arcade? Well he and Motoki are just going to play games all day. Brilliant. Meanwhile, a lovely lady walks in and HOLY SHIT IT’S REIKA. It’s an actual character that appeared in the anime! This is such a rare occasion. You may remember her from such episodes as Episode 29.

She’s here for 2 purposes. 1) so that she can be like “wtf dude you’re totally not Motoki’s friend and 2) to give a brief lecture on the rocks that the Four Generals were named after. It’s completely unnecessary, but hey, it’s diverting.

I feel like we haven’t hung out with the girls in a while, but we get a couple of scenes of Rei looking troubled at a vision, and Usagi being mightily impressed that Ami is super rich.

There’s also a funny scene of Ami talking about the sword they brought back from the Moon. It’s so tough, it cuts through a diamond ring that Ami just had lying around. She says it’s okay though, “she’s got plenty more.” This girl needs to check yo privilege.

Ami’s theory is that the sword was imbibed with some energy when Princess Serenity stabbed herself with it. That energy must be “super depressing” energy.

Usagi gets bored, falls asleep, then sneaks out to go play the Sailor V game at the arcade (seriously, ???). But when she gets there…

“AHH A ZOMBIE KILL IT”

You know, this is actually really, really creepy. And it’s about to get creepier.

Minako and Artemis realise that *someone* is completing the Sailor V at unusually high speed, and alarm bells seem to be going off. Again, ??? – some very weird things happening in this act. They get down there to see Usagi watching Mamoru play.

Despite being warned against it, Usagi continues to go down and watch Mamoru in the arcade over a few days behind everyone else’s back. It’s really interesting, actually. It’s like she’s seeing an abuse boyfriend whom her friends have warned her against, but she’s enthralled. 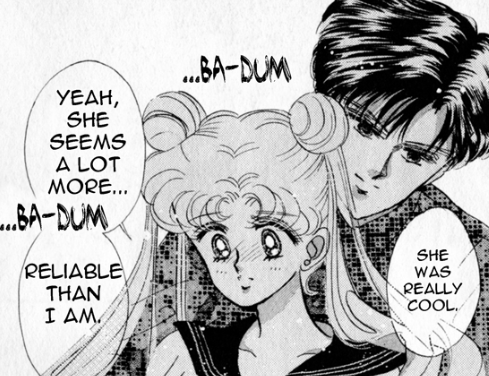 He’s like that creepy piano teacher we all used to have who rubs himself on your back. Right? …right?

Evil Mamoru seems to suspect that Usagi is really Sailor Moon (mainly because she looks exactly fucking like her), and, there’s no other word for it, *grooms* her. In any other circumstance I would warn against such material, but you know what? It works, and is seemingly a lesson for young girls against becoming obsessed with a guy to the point where you cannot see his flaws and his manipulation.

Evil Mamoru is rather confused at his inability to mesmerize Usagi, at least by magic. Usagi is being mesmerized, but it’s mainly her hormones doing that.

Despite Mamoru obviously being evil and that, the other Sailor Senshi take their time intervening. Makoto final confronts him and Motoki, by herself, as a human, at night, in a dark alley. Smart. Mamoru instantly mesmerizes her, such is her vulnerability to charm. 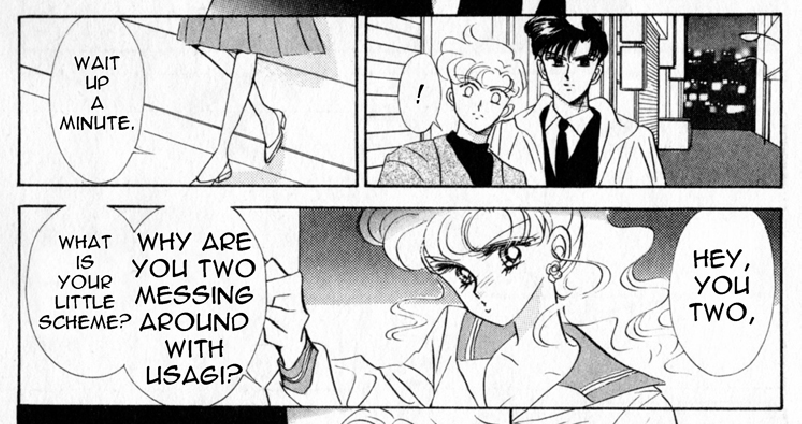 Would have been faster just to call the police.

The moral is, ladies, never look a guy in the eyes. Just in case.

Makoto calls the girls all down to the control room beneath the arcade. Uh oh. This can’t be good. 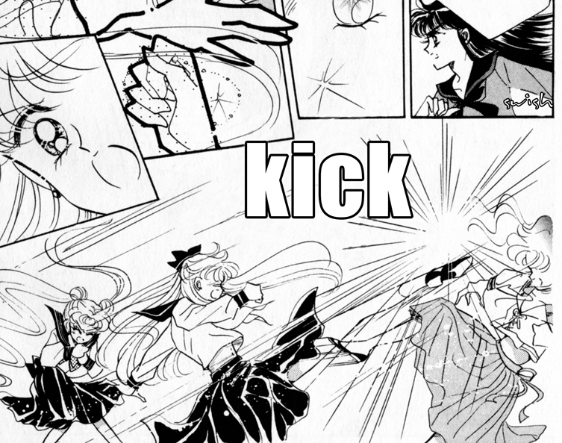 After Makoto is knocked out, the girls transform and Venus actually gets to beat up Motoki for a bit, which is a dream come true for me. Evil Tuxedo Kamen finally gets the upper hand and grabs the Ginzuishou. Usagi just cannot bring herself to attack the man she loves, until…

Sailor Moon finally gets up to kick some ass, but Queen Beryl appears before them, talks trash, then leaves with Evil Endymion.

“Hi. I’m fucking your undead boyfriend. Nice to meet you.”

I really enjoyed this arc. So much more happened than normal, and having an infiltration into the Sailor Senshi headquarters was great. Saying that, I did question how bright the Senshi were letting Evil Mamoru run around hypnotising people for so long.

This act starts off with the rather shocking affirmation by Queen Beryl that Endymion did in fact die, as was resurrected. Right from the get go, I have a wee bit of an issue here. The reason why the last two episodes of Sailor Moon the anime were so affecting was because the deaths of the Sailor Senshi and Mamoru really cost something. Although the idea of resurrection had been brought up with Queen Serenity, the actual deaths were enormously emotional.

In the manga, the idea of bring people back to life happens so often that it dilutes the emotional impact of moments like these, when you realise that Mamoru actually died.

To protect the Senshi headquarters (and the arcade, I guess. They love them video games), Sailor Mercury uses, I dunno, computer magic, or something to send them all into an alternate dimension.

She’s actually pretty useful! Weird huh? No such attack like this in the anime…

The battle with Queen Beryl takes place here. All of this has become so different, not only in events and pacing, but also tone, to the anime, that you really can’t anticipate anything having only watched the anime before.

Queen Beryl looks pretty great fighting. Aesthetically, she looks rather less like anime Beryl and more like a particular character in season 3 of the anime, with her long creepy hair, and the fact that she uses that hair to strangle Sailor Moon. Sort of reminds me of that bit in Deathly Hallows Part 2…

She looks like an amalgam of bad guys from the first, third and forth season

We get a bit of backstory with Beryl here, which is rather interesting. She seems to have called Metalia down to Earth to harness her power in order to become ruler of the world. Now that, in the manga, she has control over Endymion and the Silver Crystal, she doesn’t seem that bothered with Metalia anymore, and seeks to rule by herself.

I feel like the manga at this point is splitting its energies between Sailor Moon, mopey and usually powerless, and Sailor Venus, who kicks ass, but with whom you have no attachment unless you’ve read the Sailor V manga. As such, this whole section feels like it’s the Sailor Venus show.

And here’s the climax:

Omg why don’t all pretty ladies wield swords? Or is that too Freudian

After killing Beryl (who has slightly more backstory than the anime, but feels rather empty as a character), Venus faints. Seeing the opportunity for, I dunno, some horrible Roman Polanski basement fun-time, Evil Endymion grabs her and runs away with Sailor Moon in tow.

“I didn’t even have to buy ruffies this time!”

What is he still fighting for? Who the fuck knows. I really think it was a misstep having Beryl not be the final boss. Endymion here has no motivations, he’s just a zombie without a master.

Endymion gets pretty violent with Sailor Moon, but the scene is so far removed from how they dealt with it in the anime that’s it’s not nearly as affecting.

“Ehhh I’ve had worse. You don’t even have that tight a grip.”

The reason why Endymion has so much power is that a piece of the Ginzuishou resides within his body. Luna tells Sailor Moon that she must remove it to stop him, but that this will result in his death. At the same time, we realise that the Ginzuishou is powered by Sailor Moon’s heart. Can you see where this is going, because- 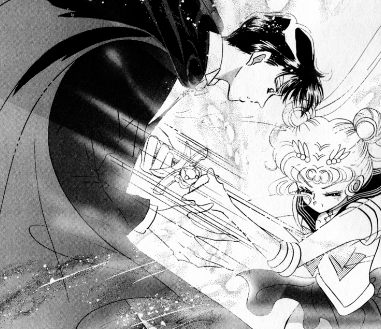 “Hey, thanks for rushing up to me just as you stabbed yourself in the gut. Now you’re all bleeding over me and shit. I’m glad we broke up.”

-WOAH HOLY SHIT what are you DOING? Totally thought this was going the way of Buffy season 2’s ending, but you just cannot stop this girl from killing herself I suppose.

I’m intrigued to see where this will go, although I really thought it would have been more interesting to see the strength of her will push her into killing Endymion to save the world. It would have fit nicely into the themes of fighting back against spousal abuse that were present in the Episode 46 of the anime.

Check back soon for the final part of the Dark Kingdom arc reviews.