Prince Dimande and his younger brother were about as different as you could get. Although they claimed to have had the same motivations, they never seemed to quite agree on anything.

Saphir was hotheaded, best on revenge and intelligent enough to realise his clan were headed for ruin. Dimande; lackadaisical, obsessive, alcoholic (perhaps) and with such a severe inability to judge character that it destroyed his entire clan.

So yeah, about what you would expect from your typical monarchy.

The unstated major premise behind the show’s treatment of Dimande and Saphir is that they were evil, but cool. They never stopped trying to make these guys seem slick and competent and tragic. The shame is that the show never quite justified this assertion.

As a rule, you should always be suspicious of the charismatic, but doubly so when the evidence for their supposed worth can’t found. As such, Dimande’s ego, his hubris, his silver hair and self-assured manner might have been fascinating character traits in a tortured soul.

He ended up being a bit of a wally.

“Could a wally do THIS? Wooooo! You’re getting sleeeeepy…”

The brothers’ very first appearance set the standard for their motivations and relationship – Dimande, obsessed with Neo Queen Serenity above all other concerns and Saphir resentful of this, dutiful and zealous about the moral justification for the Black Moon’s invasion.

Saphir, in a single episode, was convincingly redeemed. His story arc is very interesting. Like the best villains, he believes in his cause. Dedication and duty are positive traits, even when applied to an end goal that some might see as negative.

The point of all this was to explore the idea that both sides can find convincing justifications in a war, that everything isn’t black or white. His capacity for reasoning, for change, made Saphir a rather likeable character, despite him spending half the series calling for Serenity’s immediate death. 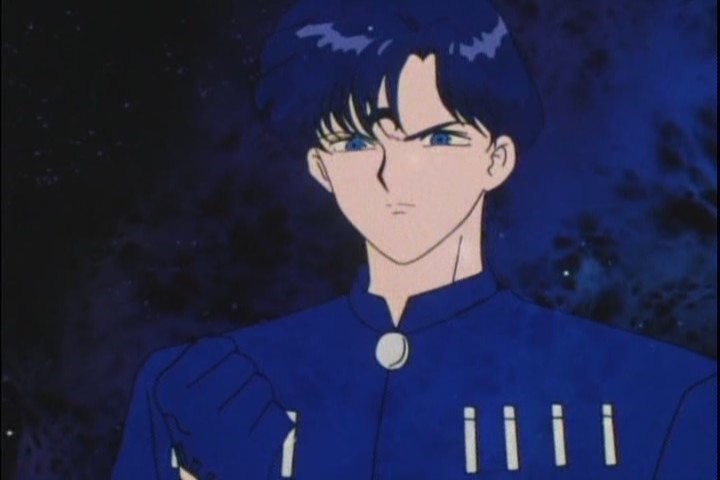 “Hooray. I’m likeable. Can we kill that chick now?”

Dimande on the other hand… well… 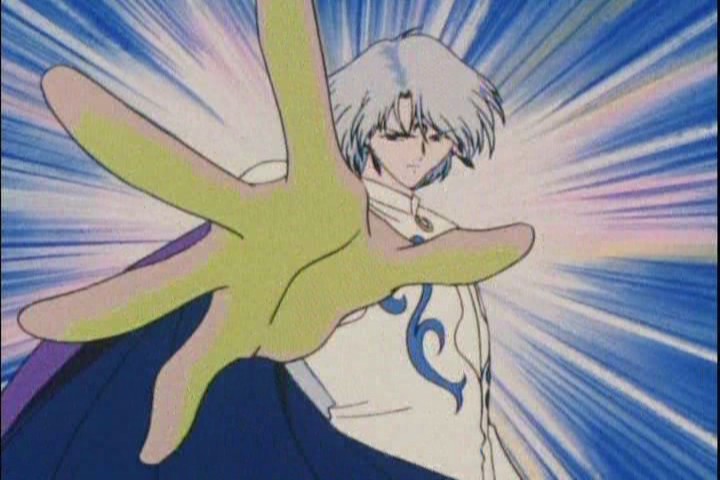 “What? How am I unlikable?”

Dimande was willing to put his carnal obsession before the good of the clan.

He proceeded to kidnap and assault Sailor Moon twice, the second occasion being the day after his brother was murdered in front of  his eyes.

“I can’t wait to try and force a girl into loving me tomorrow.”

He put an infinite amount of trust in Wiseman, a being whose origin he did not know, whose motivations he did not bother to investigate, and did not question despite repeatedly being told that he was untrustworthy.

His only reaction to Wiseman killing his brother, against his orders, was to threaten him with “an inquest.”

“Wiseman is the only person I can trust.”
“You probably shouldn’t trust me.”
“Only a trustworthy person would admit that.”

His sudden realisation that the Black Moon’s mission and his entire life had been a complete joke took place in about the time it takes to turn the lights on.

Oh, and let’s not forget that he hung up on Esmeraude in the middle of a sentence. Well OK that was pretty funny actually.

“Being hot and royal makes up for a lot, but he’s got to stop handing up on me.”

My point is that, while Saphir was an interesting character who questioned his own thought process and tried to steer his clan onto the right path at any opportunity, Dimande squandered his power, became lazy and belligerent while sat on the throne, and spent more time attempting to “claim” (his word) a teenage girl than running his stupid kingdom.

I don’t mind two-dimensional evil antagonists. I actually love Rubeus for being so downright convincingly evil, full of an ego he didn’t earn. I just don’t like the type of antagonist which the show is clearly trying to make me think is cool. 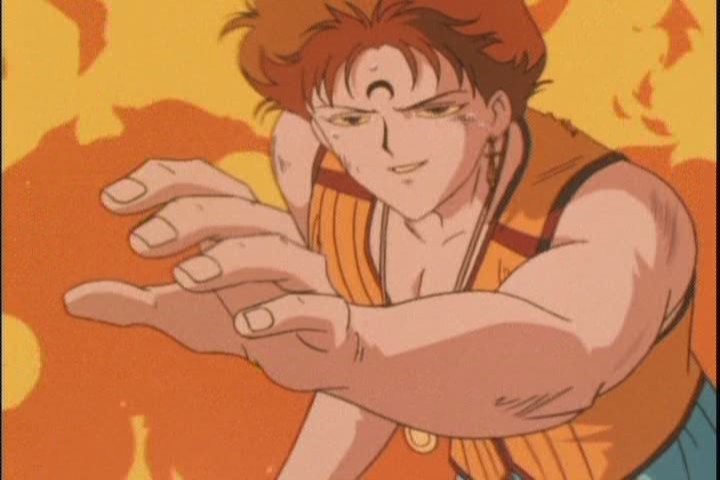 “Yay! Appreciation! I think I’d prefer a fire extinguisher if you’ve got one though.”

The sad thing is that I think Dimande could have been a really great antagonist, if they hadn’t just assumed he was charismatic because of his hair, his clothes and his status.

In the end, I just hated everything about his sexualised attacks on Sailor Moon. Unnecessary to the plot, indelicately handled and ultimately made Dimande an irredeemable shit.

That being said, it’s not like Saphir did anything more than bitch and moan for about a dozen episodes before he finally started getting interesting… right before his death.

“I’m redeemed! Nothing happens to guys just as they’ve realised the truth, right?”

The brothers actually have a strange relationship. While Dimande shoes Saphir no more interest than he does an ugly vase that he got given for his birthday, Saphir is constantly thinking about his older brother. His protests against Dimande lusting after the enemy might be loyalty and practicality, but…

…well the subtext is there to read into it if you want. It wouldn’t be the first suggested sibling relationship on the show – it’s pretty clear to me that Ali & En were more than just lovers, albeit in a “we’re all ejaculations from an ancient sentient tree” kind of incest. I certainly wouldn’t put it beyond the writers to pop it in – Japanese anime loves incest.

Saphir didn’t a chance to shine (hah! Geddit? Cause his name sounds like… you know what, forget it) as much as would have liked. All his best moments were in his final episode. There’s a few that really liked, for instance Wiseman frying the shit out of him, but that’s not really showcasing his personality much, is it?

“Actually this feels rather nice. So relaxed I think I’m just going to sleep here.”

I have to go for his rather touching scene with Petz. Seeing him with a genuine smile, telling her that he had to walk towards his death for his brother, was a powerful moment.

And hey, those abs, right?

Dimande got quite a lot of screen time, but not much in the way of variety. The moment where he finally realised what a twat he was and fought back against Wiseman was gratifying, if not completely satisfying. but at least we got to see the sucker bleed.

“My only regret… is that I didn’t make out with my brother…”
“Wait, what?”

My favourite Dimande moments are all of him throwing back wine like he’s Cersei Lannister. His cross legs, his bored expression, his attitude as though everything around him was made of poo, and that glass of off-colour wine.

“Tastes so much better when you mix it with anti-freeze.”

It was probably grape juice, knowing him.

Effort: B (Dimande was trying hard, but towards the wrong goal.)