For a bit of a change, I thought I would review the Viz Media Blu-ray release of Sailor Moon season one… or at least the first half of it. The second half is due in February, for reasons I can only think are mercantile. Whatever their motives, it’s worked; I’ve had to pre-order the second half of the Blu-ray box set also. 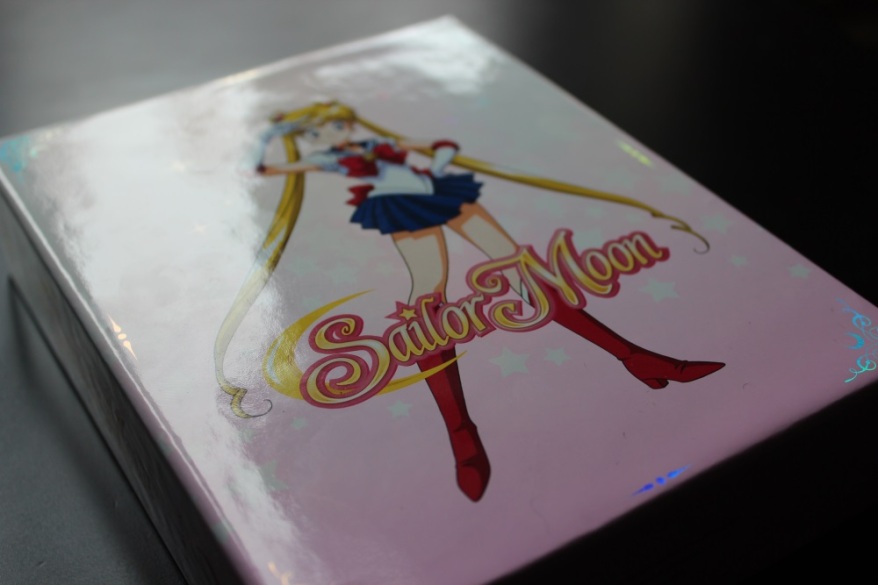 Anyway, I’ve been biting at the bit for a Blu-ray release of Sailor Moon for years, but it’s taken the revival of interest brought about by Sailor Moon Crystal, as well as the periodic upload of these remastered episodes to Hulu Plus… which I do not have access to here in the UK, naturally.

…which is also why I’ve had to import this collection from the US too. UK distributors apparently do not think that Sailor Moon fans exist in their country.

I sourced the Blu-ray from the website Right Stuf, which is where you can also pre-order the second half of the season…. provided you have access to a Region A Blu-ray player, that is.

I am, in fact, quite delighted with the box set. It’s sleek, it’s sturdy, it’s obviously been made by Sailor Moon fans. The box is stuffed with the Blu-ray case of Sailor Moon episodes 1 -23, a handy booklet guide that has been lovingly made, even if I will probably only flick through it a couple more times, and a conspicuous empty cardboard box with which the manufacturers hope you will slot in part 2 of the season, whenever they deign to make it available.

The Blu-ray case is… just that. Your bog-standard multi-disc box. I like the cover art, it’s just perfectly understated, but considering that this is, for me, the definite Sailor Moon collection (I hope), I would have liked, say, a metal case, or something a little more fancy. But that’s just me.

The discs themselves (there are 6 in all, 3 for the Blu-way discs, 3 for the DVDs, ofwhich I have no idea why they are included. Probably just to boost the price) continue the understated aesthetics of the box art. I’m glad they didn’t make them gaudy or childish – once again, it’s evidence that the designers are actual Sailor Moon aficionados rather than just doing this for the paycheck. 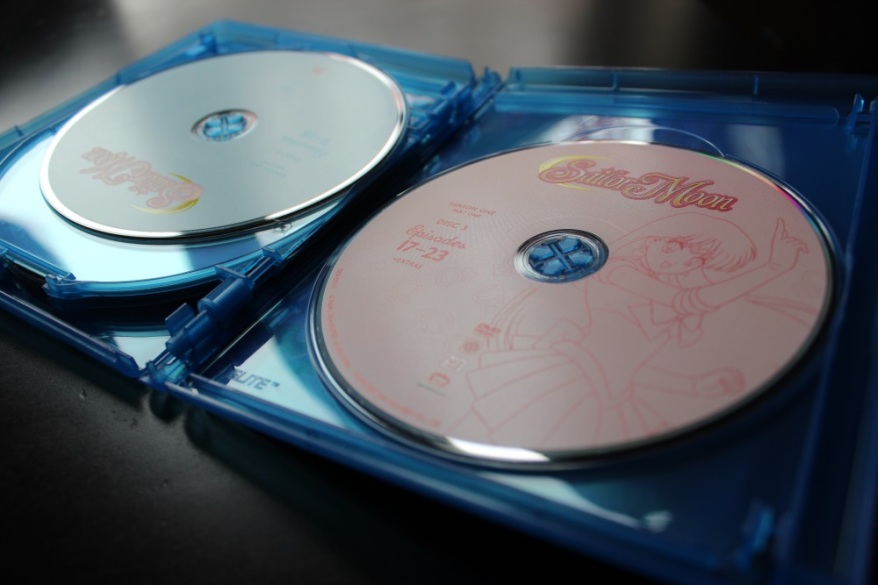 Note the simple outlines of the Senshi on each disc. Works perfectly!

The booklet is also wonderfully designed. Every episode in the first season, 1 to 26, has its own descriptive page, with a synopsis for each that, while not as entertaining as mine, at least have the advantage of actually being accurate. Also included are the lyrics for the three major songs of season 1 (Moonlight Densetsu, Heart Moving and Princess Moon), character descriptions for all the Senshi (Makoto’s is naturally and objectively the best), and some rather fetching artworks, all of which look original to me. 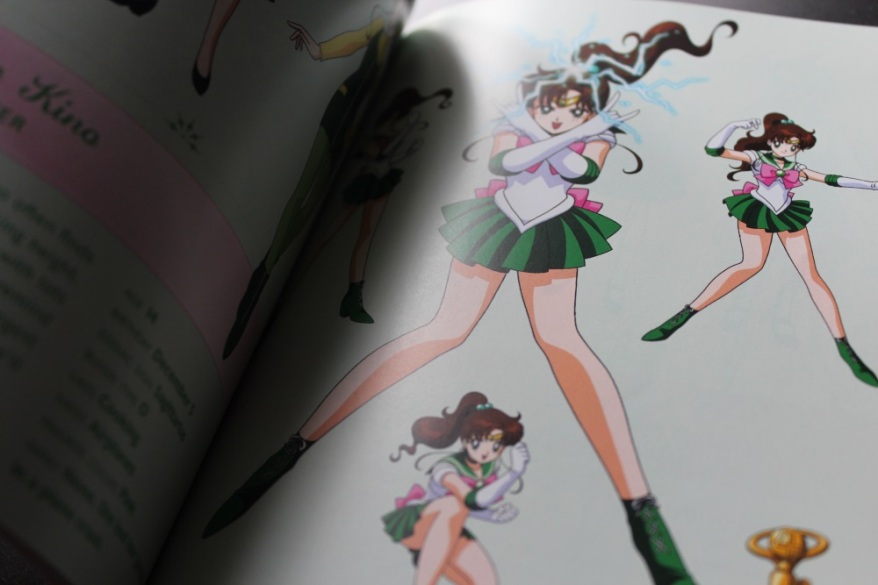 Rather exciting to see artwork for the original Sailor Moon new to me after all these years.

And as for the episodes themselves?

Well. Superb remastering. They’ve not been heavy handed, everything right and wrong with the original animation is there in all its glory, but the colours just pop off the screen. Season 1 was much more heavily stylised than the subsequent episodes, and it’s clear from rewatching the first episodes that they missed a trick by not continuing with this purple hue theme.

These shots aren’t actually from the remastered edition, but serve only to prove the point of how lovely the first episode still looks

I wondered how much they could really improve 22 year-old animation, but in comparison to my grotty old DVDs, things are more crisp, without loosing that gritty realism you get from hand-drawn animation. The sound has been properly cleaned up too – the tracks used to sound like they were sifted through dirt. It’s another chance to appreciate all the dirt horn licks and brassy battle music they moved away from in later series. I really am re-appreciating the soundtrack.

The subtitling has been redone also. There’s not much difference in the actual translation itself, but the subtitles are now in white with a black edge, as opposed to the yellow I’m used to. This can make it a little hard to make out occasionally, but honestly it looks better as a colour. 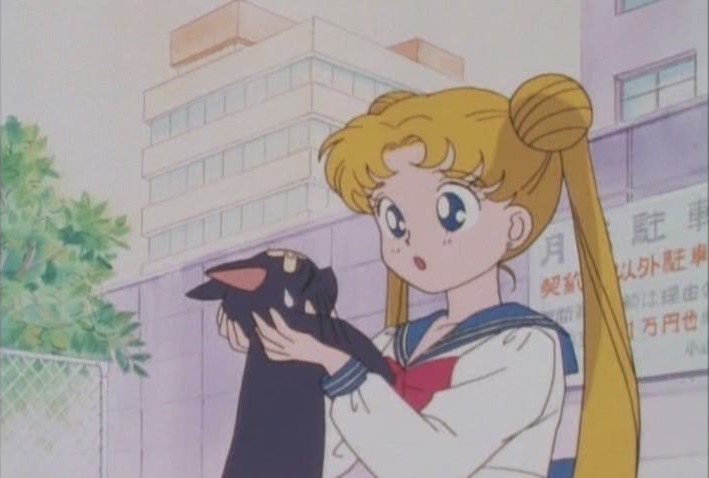 One unexpected treat that I was not expecting was the preview for next time at the end of each episode. It sounds absurd, but a little voice clip from Usagi and Luna explaining what’s coming up, against an arrangement I’ve never even heard before, was so novel that it plastered a huge grin on my face.

Rewatching the first few episodes in HD has convinced me that I really need to go back and re-do the early episode reviews on this website. The format of my “reviews” (they’re really more blow-by-blow accounts nowadays) has changed quite a bit, and a huge number of images need to be updated. I’ll get round to it at some point in the next few months. I hope.

To conclude, while I continue to be mystified (from a consumer perspective) why Viz Media has split this into 2 separate purchases, by god is this a worthwhile purchase for anyone who doesn’t have access to the US Hulu Plus. Saying that, even then I know that many people prefer to have the flesh and blood discs. There’s just something about owning Sailor Moon season one which feels solid and satisfying and right.

I didn’t need an excuse to rewatch season 1, but by golly this is how you do it in style

More than that, it’s presented marvellously. Hats off to the production team. Any collector must surely want to add this to their collection. I can only hope that Viz Media continue to remaster and release all the other seasons on Blu-ray too. They will certainly get a lot of play on my TV.

Well, wasn’t that awkward? Product reviews are new to me. Just thought I’d try out something new. It’s not often I get new Sailor Moon swag. I have a couple of mugs shaped like Luna and Artemis… and my DVD sets… and that’s pretty much it. Sort of hard for me to justify getting the replica Moon Sticks and cosplay bloomers and whatnot. I promise I shan’t make a habit out of this.