Today’s post will take a look at the closing sequence to Sailor Moon S, featuring the (improbably) popular Tuxedo Mirage and a holographic window that Apple should totally start developing in real life. First, why not refresh your memory of the closer.

I’m not overly fond of this ending. For many others, this is actually their favourite ending, possibly because of the music of Tuxedo Mirage, a ballad that actually features the five main voice actresses of the show singing the melody.

This was literally the best shot of them I could find. Yes, it’s a little horrifying.

Peach Hips is the collective name of (deep breath) Kotono Mitsuishi, Rica Fukami, Aya Hisakawa, Michie Tomizawa, and Emi Shinohara as a musical sensation. They recorded numerous tracks for the show – aside from Tuxedo Mirage, we’ve also heard them before in Sailor Moon R: The Movie with Moon Revenge.

I like that track quite a bit. It’s worth revisting, in fact. I think Moon Revenge suits the voices of the actresses better than Tuxedo Mirage, which I have to admit I’m not overly fond of. Please don’t hurt me for that.

I think it’s a lovely tune, a nice sweeping melody that grows for the refrain, with an interesting contrast between electric instruments and dramatic strings. The performance by Peach Hips is a bit squiffy, in that they sounds more like a choir of school kids singing in unison than professional performers, but I suppose the point is that they aren’t singers.

I like the familiarity of their voices, and after so many years I’m used to the song, but I will say that natural talent has never gotten in the way of Japanese idols before this, nor since. Either way, it’s a solid job, and not my sole reservation about the tune.

No, what bothers me about the song is that it’s just a little anaemic. The chorus has a sense of purpose to it, a loud declaration of emotion crescendo in an interestingly layered texture, if you want to get all arty-farty about it, but the verse just quietly ambles along lulling you to sleep. 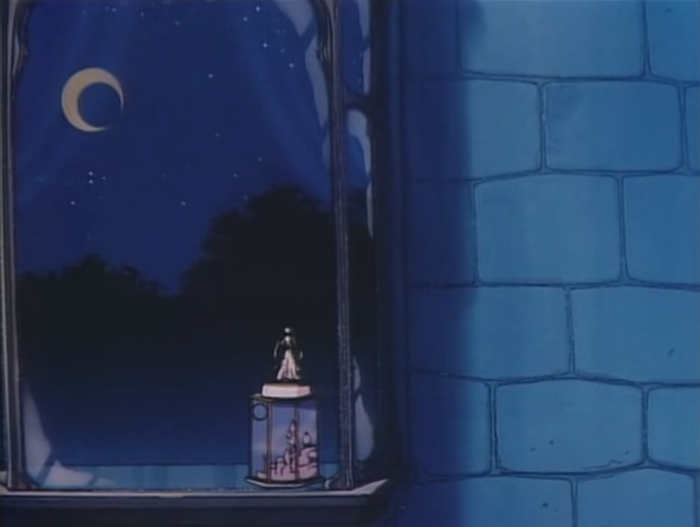 While the ladies singing in unison has a real hook to it, even if it’s unpolished, the underwhelming melody combined with their solos just leaves me checking the watch until the chorus.

Also: what the fuck is up with these lyrics? I like Celine Dion as much as the next guy (next guy: “………what?“) but gosh they’re soppy. What I liked about, say, Heart Moving‘s lyrics (yes I’m talking about Heart Moving again) was the sense of emotional investment. Here there’s some stuff about velvet and kissing and…

Yeah, “Tuxedo Mirage“. What? That sounds like Tuxedo Kamen forgot to put his clothes on and went shopping. Definite Emperor’s New Clothes thing going on there. If I have the choice, I prefer songs which aren’t about Tuxedo Kamen. Take that as a general rule. Sorry Mamo-chan.

Saying that, I still like this song. It’s fine. I don’t skip it when it starts playing on shuffle mode. It’s also got so many great positive evocations of such a brilliant series as Sailor Moon S. But it just doesn’t stack up to Heart Moving or Otome no Policy. It is, however, far superior to Princess Moon.

But naturally this is all opinion, ill-informed sniping, and thus you should commence your condemnation of my musical taste, my physical appearance and my pomposity. Comments below, please.

If you really want to see evidence that Tuxedo Mirage does have a good song in it somewhere, I recommend this piano arrangement, which is brilliant… right up till they screw up a bit near the end.

So the song is one thing… but I also must confess that I don’t particularly like this animation sequence either. It’s as anaemic as Tuxedo Mirage. Whereas the previous ending sequence was brilliantly crafted, being interesting, evolving and eye-catching, this dark window with a music box and brief flashbacks is snooze-inducing.

These flashing scenes are small and brief, kind of hard to see clearly, and freeze-frames. I’m pretty sure this is meant to be from the Silver Millennium, in the Moon Kingdom a thousand years ago, since they’re all in flowers and we have Princess Serenity and Prince Endymion. It’s an interesting concept, and I would love to see more of this time…

…but this would really fit better in the first series as an idea. I think the Silver Millennium is mentioned once in this entire series.

I also get the impression that this has been the cheapest ending to animate thus far. A small music box, some small, static images of the Senshi, a rather nice glittery moonlight effect at the end there… and that’s it. If you disagree, feel free to laugh at me: I absolutely love Sailor Moon Super S’ first ending, which features Chibi-Moon love-sick over a horse.