In Memoriam: The Witches 5, Toil & Trouble

The Witches 5 were an eclectic bunch. Their personalities, their motivations, their modus operendi, their colour schemes, their competency, each one of the Witches contrasted strongly with the others. There was even a Witch who was two people. Which I still think is cheating.

This is a piece comparing these asshat against one another and discussing their finest, and the inverse of finest, moments. You may recall that Eugeal and Mimett got an In Memoriam dedicated solely to themselves – that’s because they lived longer than one episode.

The remaining three Witches thoroughly deserve to get bundled in together, frankly, because thy didn’t even survive until the end of their shifts.

You may already have some idea of which members of the Witches 5 I like, and which ones I think suck.

Clearly, Eugeal is the best antagonist out of the Witches 5. She plays a great straight-man to Professor Tomoe’s insane bullshit, and this carries on into a bland, irritated salary-women approach to evil-doing, the result of which makes her fantastically hilarious. 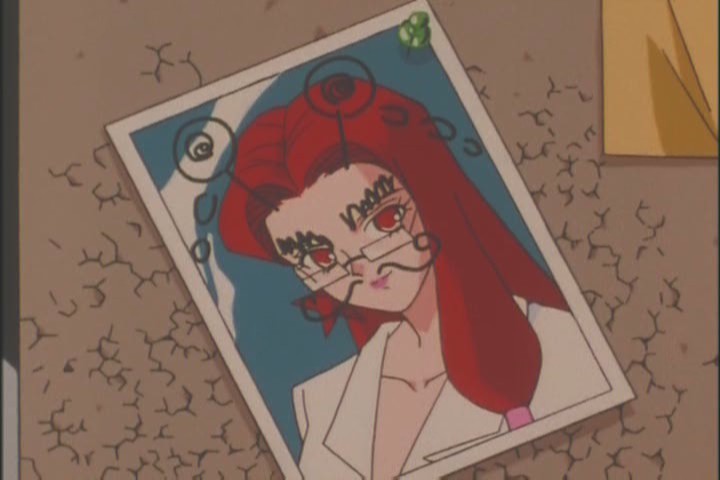 Within the story, Eugeal was also the Witch who achieved the most. Her engineering abilities allowed her to create software that located the true bearers of the Talismans, craft a gun that shot Pure Hearts right out victims’ chests, even invent a flame-thrower that was powerful enough to deflect Sailor Moon’s Moon Spiral Heart Attack.

And she did this all without petty in-fighting with her employees, without trying to justify her loses, and without the classic hubris that runs rampant in the minds of Sailor Moon’s enemies. She was only defeated after Sailor Moon literally pulled out a Deus Ex Machina in the form of Super Sailor Moon, and only killed because of the duplicitous and infinitely-unlikable Mimett.

My favourite Eugeal moment? There are so many to choose from. I think I would have to go for her very first episode, at the moment where she’s trying to locate her target. Without any subtly, just going for the easiest option, she parks up in her station wagon and simply uses her loudspeaker to ask for her victim to step out.

I love how this whole scene is performed. Eugeal isn’t angry, or threatening, she’s businesslike, a little flustered from having to do field work, and hilarious. She also gets the job done. Love ya, Eugeal.

So yeah, Eugeal is clearly the best, If Professor Tomoe wasn’t so damn good, she may have been the antagonists’ highlight of the series. So, really, screw Mimett.

Here’s another chance to discuss how much I hate Mimett. I’ve already spent an entire blog post in character assassination, but in case you want the short version…

Mimett is annoying, narcissistic, delusional, erratic, lazy, incompetent and unthreatening, which makes her a terrible person, but not necessarily a terrible character. For reasons why she’s a terrible character? She’s boring, repetitive, petty, bitter, has a voice a shade too high to be comfortable to listen to, and sticks around waaaaay too long.

Also, she KILLED EUGEAL. Damn it I told myself I wasn’t going to cry this time.

If I had to pick a favourite moment with Mimett, it would have to be the legendary Twister game. That just got flat-out weird. It’s dumb, but I laugh every time.

It was quite a relief when Mimett was eventually killed bytrying to use Eugeal’s inventions. Killed/lost in a digital universe alone and formless until the end of time, they amount to the same thing. Mimett presided over the most boring stretch of episodes in Sailor Moon S, which is remarkable considering they are the ones that introduced Hotaru and saw Super Sailor Moon kicking ass. I won’t say it’s entirely Mimett’s fault, but she damn well didn’t help matters.

So I suppose we should be thankful for Telulu for killing off Mimett in such a delightfully cruel and horrible fashion. Telulu had a fascinating introduction, subtle with a quiet menace that sudden grew in the face of Mimett’s death. I had real high hopes for her…

…except that the series took so long to finish off Mimett that the series did not have enough episodes spare to dedicate the the final three Witches, who all get shafted. As such, Telulu was given the ignominy of being the first Sailor Moon boss (boss? Is that the term?) to die after a single episode.

But that wasn’t the only problem. Telulu’s only swing at the bat was, sadly, written and animated by the shoddy team, meaning that her escapades with evil flowers looked and sounded like a complete turd. Not the worst episode in the series, but it’s somewhere near the bottom.

Telulu’s best moment? How am I supposed to chose from a handful of scenes, most of which are butt ugly? Well I’m forced to go with her only decent scene, the moment she pulled the plug on Mimett, looking all sinister. It was very cool.

I’m so disappointed in Telulu as a character because I think she could have been so much more. She has a whimsical side, as we see when she’s trying to sell her Telulun flowers, but is mostly conniving and dangerous. She provided such a nice contrast to Mimett’s universal shittiness. If I could I would trade nearly all Mimett’s episodes over to the other Witches 5.

Telulu was quickly followed up by, and imitated by, Byruit, who besides having a weirdly unwieldy name, was also strangely familiar… I didn’t notice it at the time, but since I’ve come to the conclusion that Byruit is a slightly more dickish version of Berthier from Sailor Moon R.

She’s smart, she likes blue, she faces off against Ami and realises she’s Sailor Mercury. Their names are also kind of similar. The only difference is that Berthier had room for redemption. Byruit, apparently, did not.

Byruit had a bit more to play with than Telulu. She got a rather good scene baiting Kaorinite, and extended scenes with her in her civilian disguise, as a human student of Mugen Academy. I do like seeing “Yui Bidoh” tussle with Ami over the merits of students teaching other students… which is frankly not a topic I expected to be discussed on Sailor Moon.

In the end, however, she exhibited that chronic hubris I mentioned earlier, and didn’t think to programme her own stupid nano-bots not to kill her if her wrist computer broke. I must say, her death really was rather nasty, wasn’t it? Getting devoured by nano-bots? Pretty rock and roll, really.

My favourite moment of Byruit, and again there aren’t many to choose from, has to be her confrontation with Kaorinite. They seemed so random and petty, and Kaorinite so convincingly lost them too, despite her previous fire. 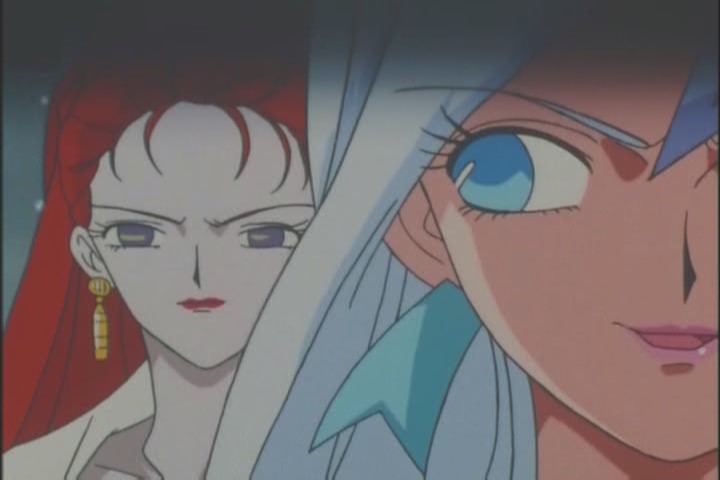 Finally came Cyprin… and Petirol. The reveal of the final member of the Witches 5 having a doppelgänger is kind of lame, to be honest. The evil twin combo has been done before in Sailor Moon, not just once, but twice in fact. It’s also a massive, massive cheat – it says Witches 5 on the door, but suddenly there’s a 6th? 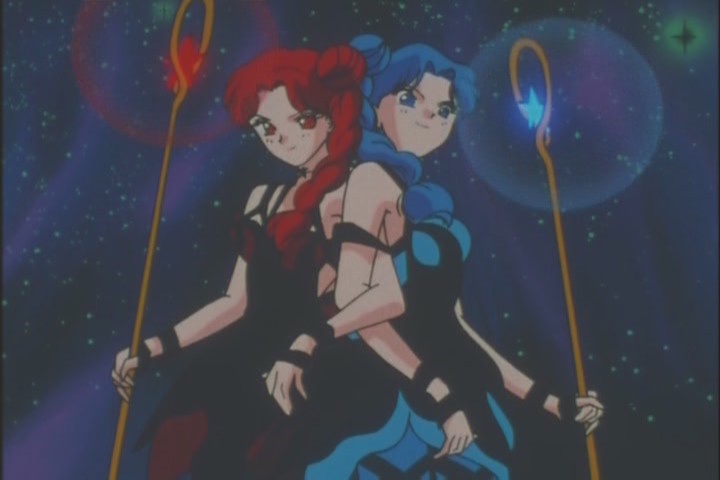 I realise that Petirol and Cyprin are probably really the same person split in two from some experiment or other, and that would be fine if it weren’t for the big 5 on the door.

Cyprin and Petirol are actually pretty damn cool. They’re powerful, interesting to watch, are calm and cocky, and really have great action shots with the Sailor Senshi. The problem that they’re appearance is in such a brilliant episode that all the other events tend to completely overshadow their brief time on screen. It really sucks – I would have loved to see more from these two.

My favourite moment from the twins is, in fact, one of just Cyprin. The moment when Sailor Venus snabs her with a Venus Love-Me Chain. and Cypril just gives this delighted smile as she’s pulled down, is just brilliant. The follow up attack, which reveals Petirol’s existence, is a great moment too.

Now comes the moment you’ve all been waiting for: the completely meaningless and arbitrary moment where I rank the Witches 5 based on their appearance in the anime. The means I am using to measure this is simple: how much did you entertain me, the viewer, the lord and deity of your show?

What? No Mimett? Surely not? Sorry Byruit, you could have been a cool character, you have some good moments, but just not enough to be memorable or entertaining.

Finally, there she is. As much as dislike her, she does have come genuinely comic moments, and I do enjoy hating her so much. 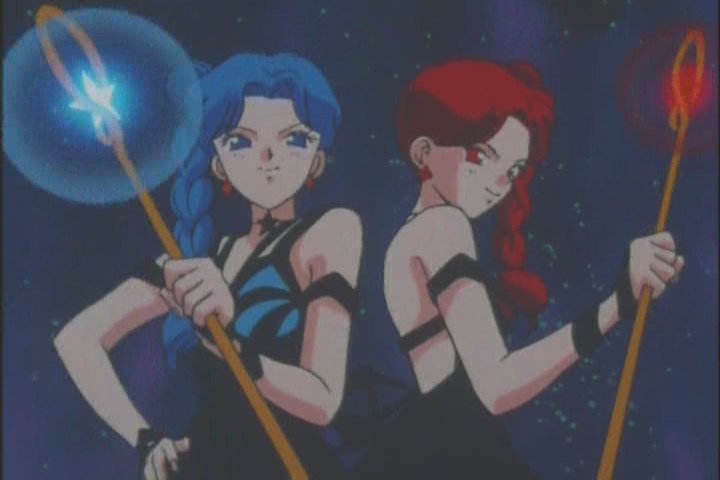 These guys were really cool, really threatening, and had so much potential. Their time on screen was so brief, just a single fight, but man did they squeeze out some quality minutes. 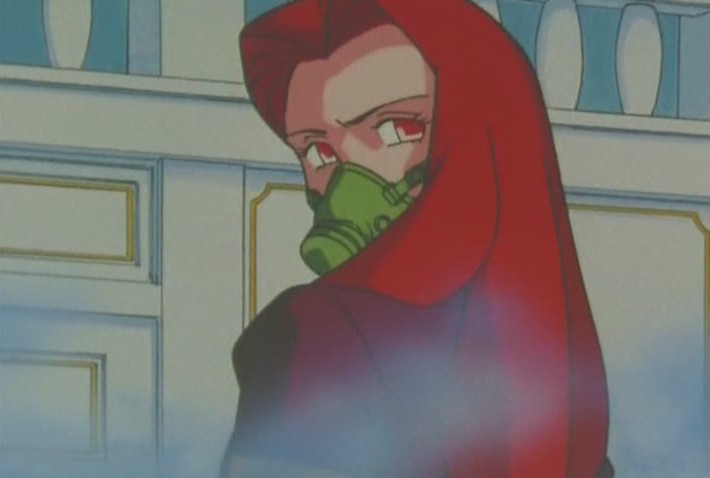 Was their even a question over this? Would she have survived as the antagonist right up until Mistress Nine… That would have been my ideal series. Then again, she may have gotten boring by then. We’ll never know.

Maybe in Sailor Moon Crystal we’ll get the Witches 1.

Overall, I think the Witches 5 were a bit hit and miss. I love the concept, I adore every moment of Eugeal, but the others were unlikeable or forgettable. They didn’t have the captivating personality of Professor Tomoe, nor the style and threat from Nephrite, Zoisite or Kunzite. The decision to reduce the last 3 Witches to monsters-of-the-week continues to baffle me.

Still, Sailor Moon S has more than enough going for it that the Witches 5’s being underwhelming didn’t affect the quality of the series, and besides we have Kaorinite, the Professor, Mistress Nine and Pharaoh 90 all picking up the slack.