Sailor Moon uses the chance created by her fellow Senshi’s sacrifices for a final stand against Queen Metalia. As Luna prays in the ruins of Moon Castle, Sailor Moon ascends to full control over the Silver Crystal. It’s the final battle against the Dark Kingdom.

The first part of this review is spoiler-free.

Despite the most recent episodes of Sailor Moon Crystal being rather deflating, this episode was rather better. The pacing is still rather off, since a new story arc begins half way through the episode, but this it’s enjoyable at the very least, even if it’s not going to win any awards.

It would be difficult to get too emotionally invested in the moments of pathos here, the characters being rather undeserved in terms of development over this series, but the bond between Usagi and Mamoru, a highlight of the season thus far, returns to strength once more. 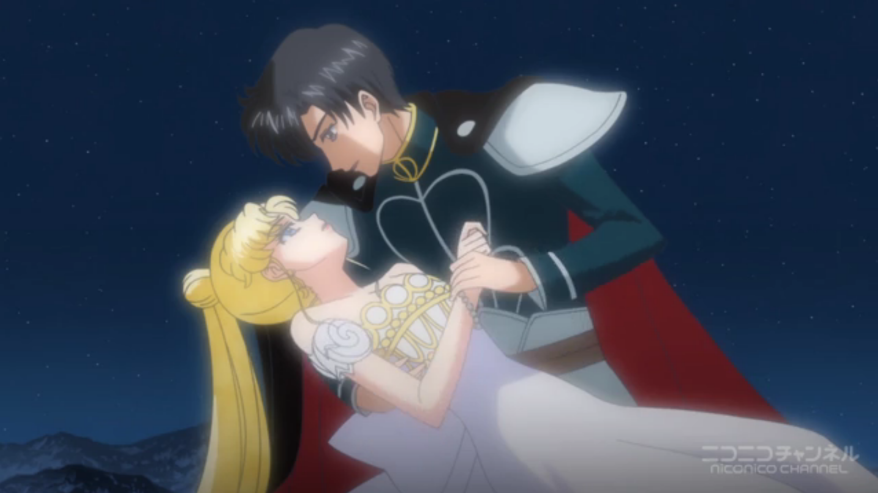 There are issues here, an over-reliance on an ethereal prayer. You never really get the impression that Sailor Moon has to try particularly hard in the final battle here, with a bit of a Deus Ex Machina.

I am rather glad to get away from the Dark Kingdom. Between a few lacklustre episodes, a lack of direction for the Great Four, and the tremendously disappointing “big evil face” that was Queen Metalia, the transition that takes place over this episode to the new arc is warmly received.

Saying that, most of this episode is a wrap-up episode of sorts. Which is fine, really. The show starts to feel positive again in this episode, and it’s gratefully received.

Thus far, Sailor Moon Crystal has been fantastic at set-up, but gets rather squiffy over time This is in large part to its adherence to the manga, which, while enjoyable, has passed on its definite problems to this adaptation.

Those problems in this episode can be typified by the moment when buildings on the Moon begin to get restored. There’s no real explanation given, no mechanism, no reason for it to happen. Things just occur, as though it were being invented on the spot.

Saying that, nothing that happens seems particularly out of place, even if everything is just a bit too peachy and easy to wrap-up.

I’m glad to report that while the art is by no means perfect (a couple of articles disappear from scene to scene), the quality has most definitely jumped up from last week. Some shots reminded me how beautiful the design of Naoko Takeuchi could be, especially regarding the Moon Kingdom.

For anyone who has ever watched the original anime adaptation, this episode is something like a strange eclectic nostalgia remix. That adaptation removed several moments from the manga, and referenced them throughout the rest of the series instead. Seeing those moments echoed here, so early on in the story, was really rather interesting.

There isn’t too much going on this episode, but that’s perfectly ok. Problems seem to arise in Sailor Moon Crystal when the writers try to shovel too much in, be too close to the manga. With the new character that appears in this episode, things look as though they might definitely be on the up.

Time to get excited again, as the Black Moon arc begins.

Don’t scroll down if you don’t want to get a blow-by-blow analysis!

Still here? Glad you could join me.

There are some really beautiful shots here. While the action is a little… rote, there is at least some decent talent back at the art director’s helm.

The entire battle against Metalia is your standard “energy blast” affair, but it looks decent enough. As I said before, it’s not particularly thrilling, but it’s enough to entertain.

Absolutely no emotional reaction from the Senshi’s “sacrifice” last time. Compared to the emotionally twisted deaths in the original adaptation, these scenes are devoid of pathos.

Too bad. Good excuse for a redesigned pen for sale at your nearest retailer, kids

Luna is given a bit to do, here, travelling to the Moon and “praying”… I never like this in the manga, and it’s not treated much better here. What does praying mean? Why did Luna have to pray here and now? Could this have been done a little sooner and prevented a lot of hoo-hah? Too Deus Ex Machina, takes Sailor Moon’s victory out of her hands. Metalia sucks. She just shouts about how defeated she is being made, just to make sure the viewer knows how rubbish she is.

Farewell, mean grumpy-faced cloud! Maybe a can of Fabreeze would’ve killed you sooner. And WOW WOW they actually gave a glimpse of Luna’s human side! Now we haven’t seen this since the Sailor Moon S movie… which I’ll be reviewing soon enough. This is very intriguing stuff. Shame they don’t dwell on it more than a second, but I’m interesting to see where this goes.

SO COOL! Don’t think this will go anywhere for a very long time though…

The Moon Kingdom’s revival is gorgeous… but also I can’t help but be completely and utterly confused by it. I feel like it serves no purpose whatsoever, other than to make something cool. So no one is living here right? Can I squat?

Sailor Moon’s bracelet bursts in the effort of finishing Metalia… which was moved in the original adaptation to Sailor Moon R: The Movie, if you will remember. Naturally the only thing that can revive Usagi is Mamoru macking on her. What is with this guy and unconscious making-out?

After Usagi realises that the other Senshi are dead (maybe? Still zero impact), Mamoru uses a power for the first time to look in upon the Earth, where they are. This is cool, since we never saw any interesting powers in the original adaptation, but it comes out of nowhere & no one seems that bothered by it. Ah well. Gift horses and all that.

“My hand also gets ESPN.”

Usagi and Mamoru travel back to the Moon Kingdom. I like that Usagi has a moment where she announces that she’ll live happily in her reincarnated life on Earth. Wish there was a little more of Queen Serenity, or the Kingdom in general. Sounds like we’re completely done with the Moon, which is too bad. “You mum seems nice. Why is she 8 inches tall?”

Presents! New broach. Classic design, haven’t deviated from the original. Comes with an updated transformation sequence for the hell of it. I don’t feel like Usagi earned it though. In the original adaptation, she always went though hell to get upgraded.

Too bad they kept the shitty CGI sequence

Sailor Moon is now powerful enough to revive all life on Earth. Sooo that’s nice… kind of makes any future enemy completely redundant. Her powers are on such a sliding scale.

And the Senshi are alive again! Well that was quick. The reunion is nice, they linger on the bonds they’ve formed.

“That was some crazy dream. I dreamt that I ran around in a mini-skirt yelling Usagi over and over again”

The post-battle vignette is a little dull, but it’s nice and inoffensive. It does remind you how little we’ve really seen of these girls in their everyday lives. Rei, however, isn’t having such a good time, seeing a strange vision in the fire, that looks suspiciously familiar… God I hate Dimande. Stay and burn in the fire, mate.

“That guy in the fire looks like a rapist.”

Usagi and Mamoru have a really nice moment in the park together. I got rather excited when Luna-P smacked Mamoru in the head and a portal opened up, but the tone of the anime is such that humorous moments like these don’t feel as natural as they should. Does anyone else miss the swirling pink clouds?

I always found this moment both fun and creepy in the original anime. Something about this is a little more creepy than fun… This is so nostalgic that I really liked this, but something tells me that my love for the original anime is making me enjoy this more than the actual scene.

Oh this isn’t so bad…

So! Chibi-Usa! I like her design. She’s very serious, isn’t she? She’s even more alarming than ever. I can’t imagine the fun frivolous side of her coming out, but we’ll see where this goes. I can’t believe how happy I am to see her, it really feels like she’s kicking the series in the butt. 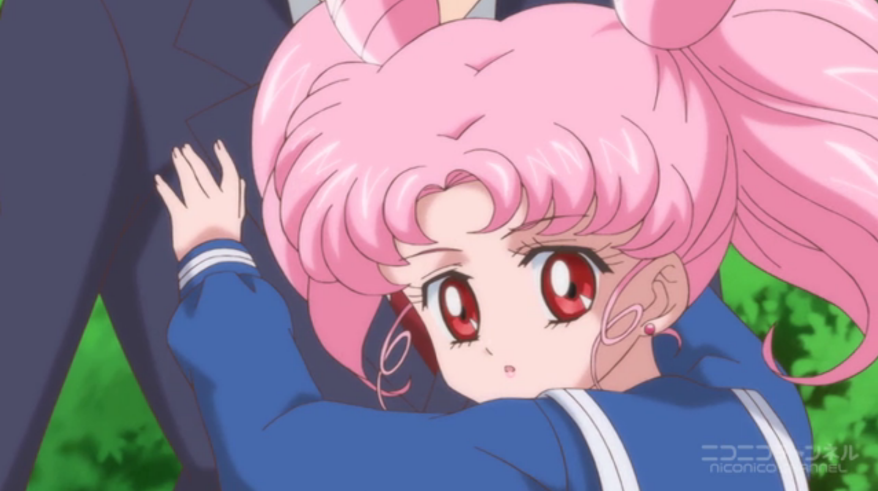 Having this as a climax at the end of an episode as opposed to a joke near the beginning makes this look a lot more serious. So strange to see such a human threat to Usagi after all the magical bullshit she’s had.

This will make no sense whatsoever if they stick with the manga storyline, since Chibi-Usa actually knows Usagi is her mother… I think

All in all… I liked this episode. Happy to be satisfied again, but saying that it’s not more than satisfactory. I’m more excited about what this episode will grow into over the series. This is fine too – there’s not much in the way of set-up in a typical episode, things just happen. Hope there’s time to slow down in the Black Moon arc. 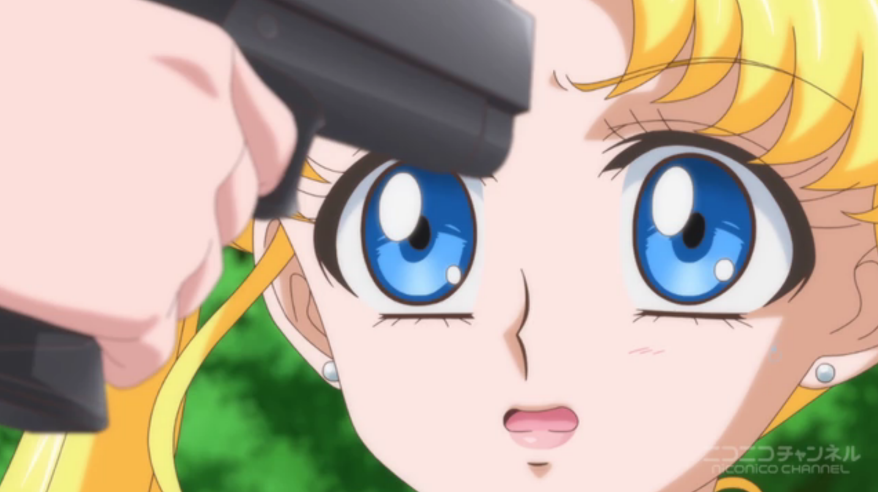 “Do we have to cut here? I kinda want to find out if I get shot in the head or not.”