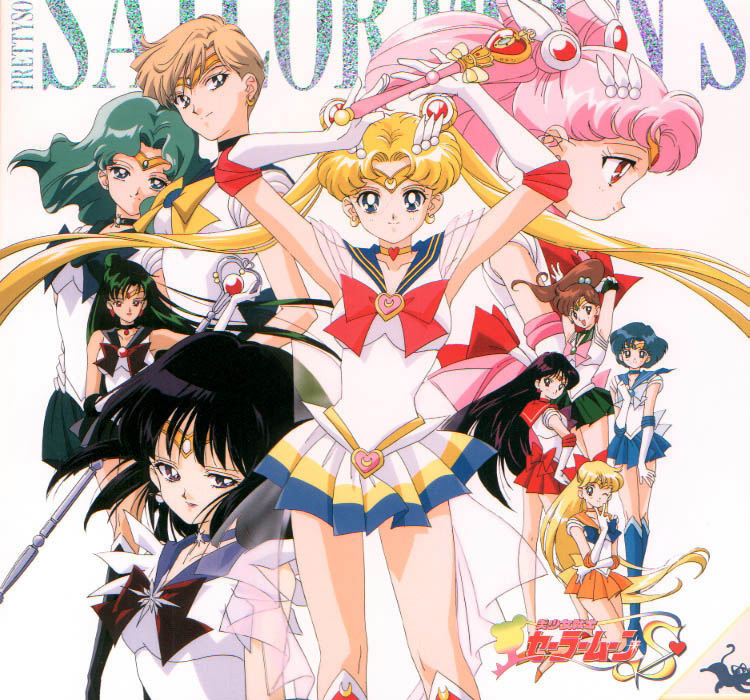 In the final entry of this multi-part wrap-up of Sailor Moon S, I dispense with discussions of utilitarianism and nuanced character development, opting instead for the popularist model of lists of stuff.

So here it is. Top episodes, worst episodes, best moments, the best art, the best characters, all shall be definitively revealed and shall harbour no other opinion.

Seriously, though, if you disagree, feel free to give me your thoughts in the comments below, and use salty language. And caps lock. Been a while since I’ve had a good flaming.

For more in-depth coverage of Sailor Moon S as a whole, try Part 1, Part 2, Part 3 or Part 4 of my wrap-up blog series, otherwise why not break it down episode by episode?

These lists are in no particular order. It feels like splitting hairs when trying to decide between the best and worst. Feel free to make your own suggestions, always welcome your comments.

3:7 – Cold-Hearted Uranus? Makoto in Trouble: Such a great episode. Makoto seems besotted by Haruka (who wouldn’t be), as the other girls begin to question her sexuality. Unusually mature and interesting exploration of fluid sexuality from a Japanese anime.

3:11 – Retire from the Sailor Senshi!? Minako’s Concerns: Minako’s internal conflict over whether she’s sacrificed personal happiness to be a Sailor Senshi is fantastically done, and really makes you realise that these are meant to be be just ordinary highschool girls. More than that, it gave Minako her first really great storyline.

3:17 – The Bond of Destiny! The Distant Days of Uranus: Haruka’s backstory, of how she met, and fell in love with, Michiru, is beautiful, scary, and completely fitting with her character. It gives her a level of depth beyond just being completely kick ass, and, once again, homosexual love shown in a positive and normalising light. 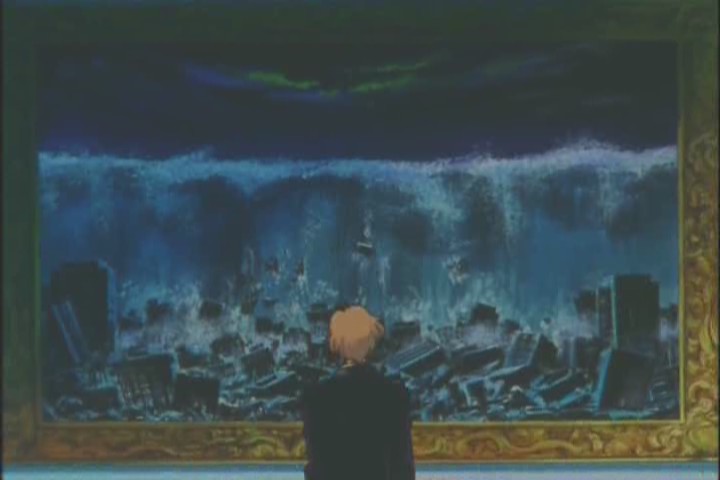 3:21 – Death of Uranus and Neptune!? Talismans Appear: Another brilliant episode for Haruka and Michiru. So many unsaid things here, the writing relies on subtlety, which is inordinately hard for anime writers, or so I’ve seen. The moment when Uranus realises that she and Neptune are the Talisman-bearers, and chooses to end her life, is heartbreaking. 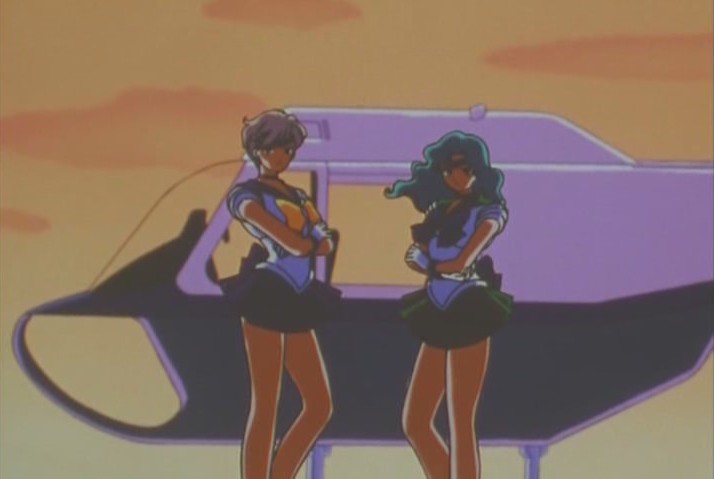 3:36 – A Bright Shooting Star! Saturn, and the Messiah: Well this really had to be on the list, you know. It’s so perfectly crafted.

Hotaru consume’s Chibi-Usa’s Pure Heart, awakens as Mistress Nine in 3:34 – Shadows of Destruction! The Awakening of the Messiah of Silence

MOON CRISIS MAKE-UP! in 3:36 – A Bright Shooting Star! Saturn, and the Messiah

Makoto falls in love at first sight in 3:7 – Cold-Hearted Uranus? Makoto in Trouble

Usagi and Minako fall in love at first sight in 3:3 – A Beautiful Boy? The Secret of Haruka Tenoh

Minako gets rather bitter about love being in the air in 3:11 – Retire from the Sailor Senshi!? Minako’s Concerns

Rei smashes into a stand on a bike at full speed, then gets the feeling she’s being stalked in 3:14 – The Arrival of the Tiny Pretty Soldier

Usagi and Minako accidentally clean out a crane game machine, Minako spends the rest of the episode trying to get rid of them in 3:20 – A Time of Shock! True Identities Revealed to One Another

3:4 – Usagi’s Idol! The Graceful Genius Michiru: The art is awful, the story is awful, everyone except Usagi acts like a complete dick. I like a couple of moments here and there, but honestly… 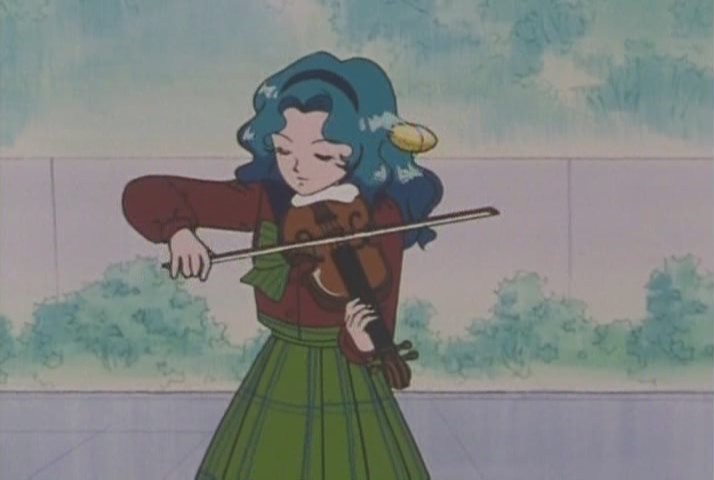 3:6 – Leave It to the Moon for Love Aid: Naru and Umino get one episode this entire series, and it’s filled with awkward jokes and clumsy, sappy speeches about love. Also the art is rather strange.

3:9 – Save Friends! Moon and Uranus Join Forces: SO BAD. JUST SO FUCKING BAD. I had to drink, like, 4 bottles of anti-freeze before I was able to scrub all the neurons that recalled what actually happened here.

3:18 – Art is an Explosion of Love! Chibi-Usa’s First Love: 11 bottles of industrial paint stripper for this one. 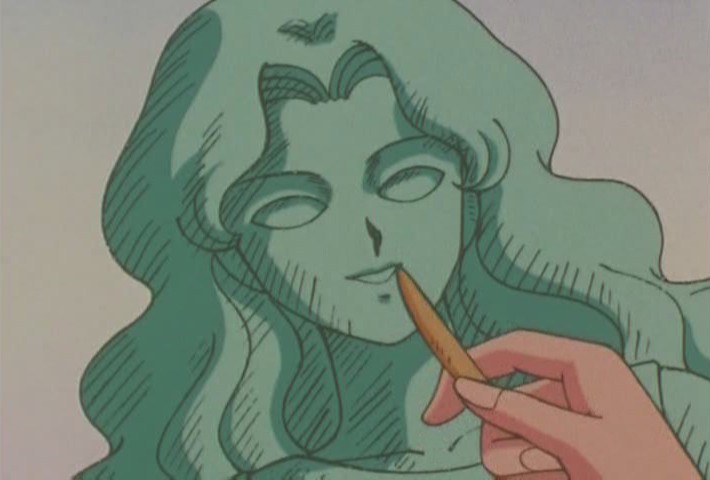 3:25 – Crazy for Celebrities! Mimett, in Doubt: This isn’t terrible, but definitely falls within the bottom 5. Barely. But any episode where we have to follow Mimett’s inner turmoil over whether to remain evil or give it all up for a shitty role in a film is not a good one. 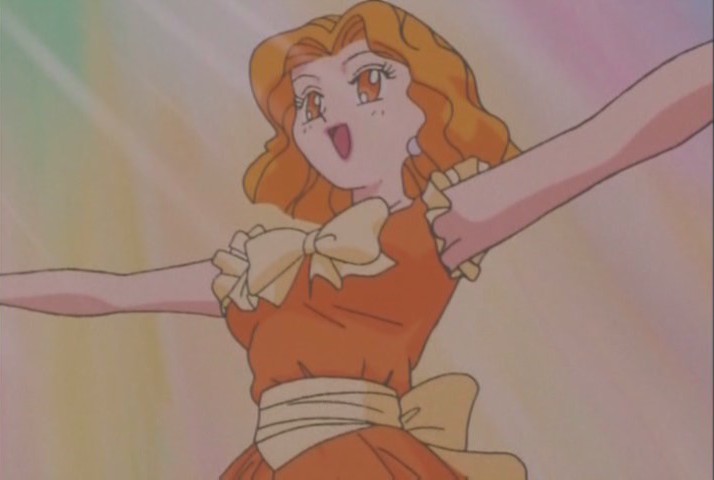 “Back then, I wanted to be the wind” in 3:17 – The Bond of Destiny! The Distant Days of Uranus

Hotaru breaks through Mistress Nine, leaving only the symbol of Sailor Saturn in 3:36 – A Bright Shooting Star! Saturn, and the Messiah

Haruka thinks about Michiru in 3:21 – Death of Uranus and Neptune!? Talismans Appear

Super Sailor Moon holds the reincarnated Hotaru in 3:36 – A Bright Shooting Star! Saturn, and the Messiah

Hotaru is afraid of herself in 3:26 – Shadow of Silence!? The Pale Glimmer of a Firefly

Elsa Grey, butt-feelin’ one-time running rival of Haruka in 3:17 – The Bond of Destiny! The Distant Days of Uranus

Yakushiji, the serene monk with a sense of humour in 3:16 – Wanting More Power! Mako-Chan’s Lost Path

Random unnamed gardening Senpai who proves to be disturbingly virile in 3:27 – Sunny Skies After a Storm! A Friendship Dedicated to Hotaru

Tamasaburo, the talented tea ceremony master who proves to be a little too excited about Sailor Moon in 3:15 – Seeking Friends! Chibi-Moon’s Actions 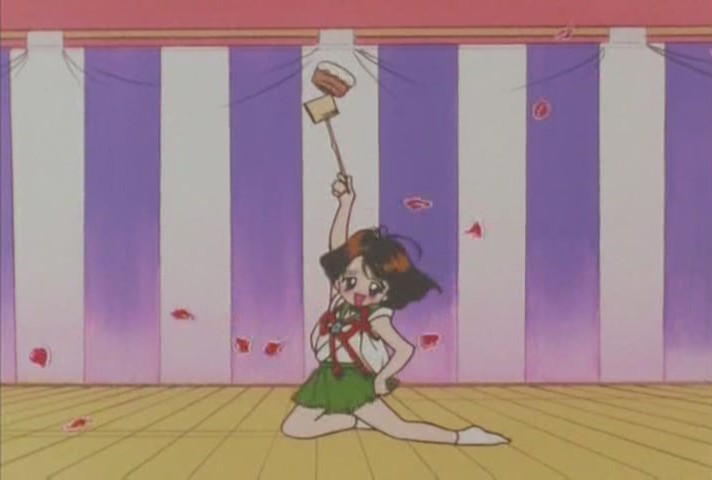 Edwards, the English-ass English dude who speaks English as though he’s a Japanese guy trying to pretend he’s English in 3:19 – Usagi’s Dance, In Time to a Waltz

Steeringoo, the Daimohn with a stupid, stupid name and the tendency to vocalise crashes with “Babaaaaaan!” in 3:3 – A Beautiful Boy? The Secret of Haruka Tenoh

Osoji, the weird elephant-vacuum-lady-monster who spends most of the episode running after the Pure Heart she lost in 3:5 – Protect the Pure Heart! A Three-Way Battle

Scar, the… absolute weirdo in 3:7 – Cold-Hearted Uranus? Makoto in Trouble 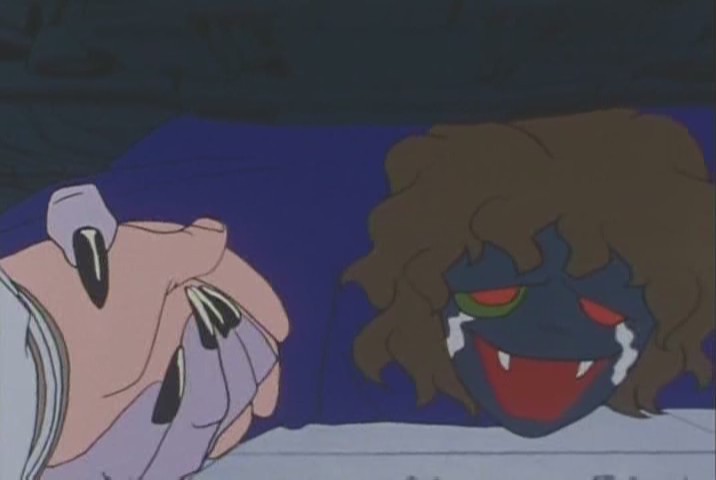 Doorknobudaa, the, uh door-knobber, who is excellent at sealing places tight, but is self-admittedly awful at fighting in 3:20 – A Time of Shock! True Identities Revealed to One Another

Utomodachi, the super-kawaii Daimohn dressed as a kindergartener who gets hurt feelings in 3:26 – Shadow of Silence!? The Pale Glimmer of a Firefly

Octave. Would be better as firewood in 3:4 – Usagi’s Idol! The Graceful Genius Michiru

Tiren. Double the Daimohn, double the vomit in 3:9 – Save Friends! Moon and Uranus Join Forces

Chokokkar. Paint me a better Daimohn, because this stinks, in 3:18 – Art is an Explosion of Love! Chibi-Usa’s First Love

Ubara. The most beautiful of roses have the deadliest of thorns, but so do the really shit roses, in 3:27 – Sunny Skies After a Storm! A Friendship Dedicated to Hotaru

Haruka is one of my favourite characters in any anime. She’s tough, but her vulnerability comes out in her relationship with Michiru. She has so many great episodes in a single season, but by far the one she utterly dominates is 3:21 – Death of Uranus and Neptune!? Talismans Appear

Minako has some really good episodes in Sailor Moon S, in a way that she never had previous to this series. Coming in late in season 1, and not being given any particularly interesting to do in season 2, Minako was given some of the most brilliant comedic moments and, more important, some beautifully constructed character developments. Sailor Moon S made Minako a main character again.

Gosh I love Eugeal. I’ve been on at length about her before, but when you step back and look at the series, it was her bland professionalism, her impatience and dogged lack of subtlety that really made her 9 episode tenure one of the best in the series.

From the first episode of Sailor Moon S, there has been one constant, and that’s the sheer brilliance of Professor Tomoe. There has never been quite a character able to balance such fantastic insane humour with genuine creepy threat. He never had a bad scene in the entire series. What a performance.

The obvious choice, but hey, Usagi was as brilliant as ever in Sailor Moon S. She didn’t have the emotionally twisting scenarios as in the first 2 seasons. There was no lover-turned-evil. There was no cruel and wicked treatment by Mamoru, no big revelation over her future role as queen of the world, nor her future daughter.

What Sailor Moon S did was push Usagi, Sailor Moon, forward in terms of an identifiable, empathetic, admirable and at times tragic ethos. Her idealism really came to bear here, from the moments her utter horror at seeing her friends’ lives in danger, to her determination not to allow anyone else die for her.

While it’s not referenced, it’s certainly possible that this visceral reaction on Usagi’s behalf stems from -that incident-. It certainly makes sense, even more so to the viewer, who witness the pain, the beautiful sadness that the death of Usagi’s loved ones brought on her… and us, of course.

There’s also her status as “Messiah”, whatever that truly means. It may be her destiny to lead the Earth as Neo Queen Serenity, but in Sailor Moon S it means she has several moments looking completely bad ass… not just when she gets to transform into Super Sailor Moon, but also when, utterly powerless, she still continues fighting, still refuses to drop that idealism. 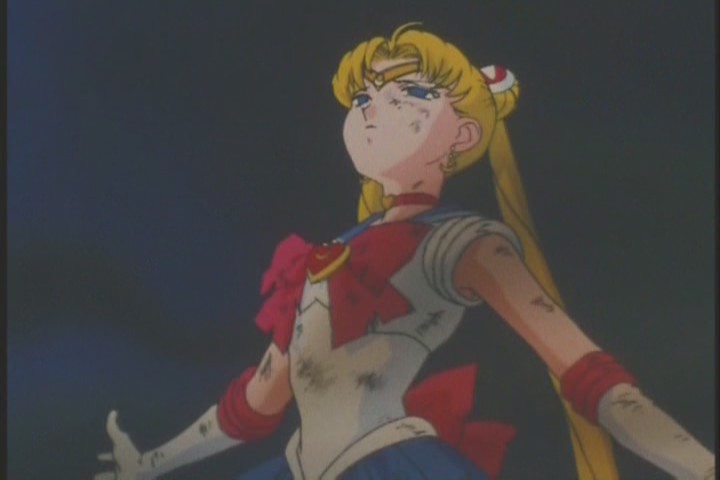 I’ve always loved Usagi, but Sailor Moon S is the series that makes me truly respect her too. She is, and I know this sounds lame as heck, my hero.

There’s a bucket right behind you if you need to puke.

And there you have it. That’s Sailor Moon S. I’m done. I’m finished. If 38 reviews weren’t enough, I’ve thrown in this wrap-up series too. Blimey, I must be nuts.

Not much more to say except… that this isn’t the end of Sailor Moon S. No no, I still have the Infinity Arc of the manga to review, and will compare and contrast it to Sailor Moon S. Also, Sailor Moon S: The Movie is still to come… and Sailor Moon: Another Story has a huge number of tie-ins to this series too.

So yeah. Not done with Sailor Moon S after all.