I just couldn’t stay away from Sailor Moon: Another Story, could I? Seeing as my playthrough lasted 11 parts (which is several more than I expected), it’s only right that I compile my thoughts on the game in a final review.

So here it is. You can check all the individual sections of the game on the Another Story page, but they won’t be necessary to follow this review, which is intended to stand in its own right.

Anime typically fares up a little better than other media, but creating an RPG based on a hyper-popular shojou show that respects the source material while creating a new story worthy of the name? 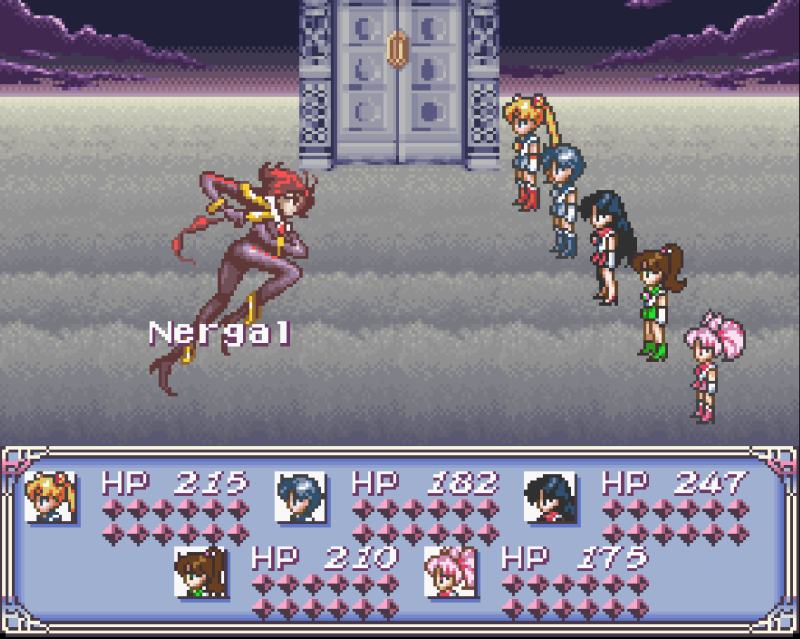 Which is why Sailor Moon: Another Story’s greatest asset is surprise. By all accounts, it should be a shoddy cheap mess designed to cash-in. In fact for all intents and purposes, it is, but the dedication from the writers and animators to capture themes, dialogue and characters from the show and the manga will really take you by surprise.

A big problem with other Sailor Moon games is that they’re all either side-scrolling beat-em-ups, 1Vs1 fighters like Street Fighter or, you know, that inescapably crap puzzle genre. All of them ignore the number 1 thing that Sailor Moon fans would want out of a computer game: story.

Another Story’s plot, when taken as a whole, isn’t particularly long or complex. A shaman in future Crystal Tokyo is attempting to alter fate to cheat her impending death and, we presume, take control of the premier power in the Solar System, the Silver Crystal. To this end she enlists 5 disenfranchised youths who suffered from the attacks by the Black Moon in Sailor Moon R, and begins meddling with fate.

The shaman Apsu’s fate alteration powers resurrect the defeated enemies of Sailor Moon in a pleasingly vague manner. It has a strange semblance to The Vision of Escaflowne in that regard, an anime that premiered the year after. It’s a clever device that allowed the creators to draw upon the huge pool of monster and character designs, while also giving the player precisely what they wanted: to revisit key moments from the anime without it feeling repetitive or exploitative.

They don’t pull this off flawlessly, far from it. Complex and powerful generals of the Black Moon turn up unexpectedly, give a couple of lines and die pathetically, while those of the Death Busters receive even less attention.

They really are more cameos to add flavour and nostalgia, but they don’t capitalise on the variety of enemies on offer, here. There’s about a dozen attacks that all enemies seem to share, nothing really to differentiate from from another.

This is, of course, merely the start of the myriad of problems with the battling system. For, if it were not for the excellent story, characterisation and throw-backs to the anime and manga, Sailor Moon: Another Story would be a steaming pile of shit.

In brief (and read in a single long breath);

The battling is simplistic, there’s no reward for levelling up, you’re expected to grind at every single opportunity to the point where it’s detrimental to the flow of the story, enemies feel identical except for the artwork, the Energy Point system forces you to spam items over and over again just to attack with a skill, bosses have far too many hit points and the frequency of random encounters is galling, especially when you don’t have a map or any idea where you’re meant to be going.

Saying that, it’s not ALL bad. I like using the attacks from the show, I like the sound effects of the Seiyuu in battle (although the quality is utter balls), I like the feeling as though you’re really controlling these girls you’ve come to know and love. I would say, however, that they’ve done the bare minimum to illicit these appreciations from their audience.

My favourite moments in the game are simply the Senshi interacting with each other. The comedy is lifted straight from the anime, and they’ve really thought how the moment of the girls translates to simple 16-bit pixel graphics.

Looking at the game objectively, it isn’t an amazing ground-breaking tale. Far from it, it’s strength comes from being as derivative as possible to the show. However, there are three moments in the game that hold true pathos, that echoes the darkest parts of Sailor Moon that its fans both cherish and fear.

Simply put: I love this game in spite of all it does to try and steer me against it. There’s a reason why this cheap Final Fantasy knock-off has endured in the minds of Sailor Moon fans. With the advent of Sailor Moon Crystal, many sources have been revisiting Another Story, and I’ve even seen a few feeds on live-streaming site Twitch.

For me, the game is at its best when you throw on a few cheat codes to minimise the time spent in training and battling, and just enjoy playing the characters you love in familiar yet strangely-exhilarating situations. 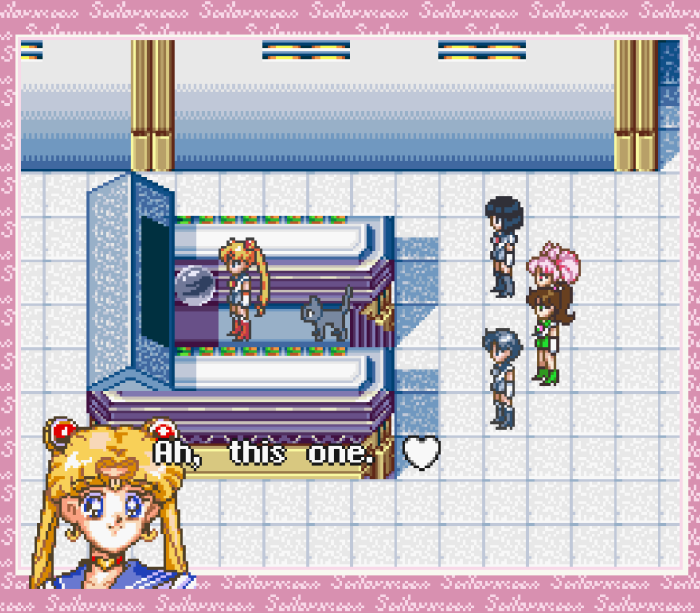 The arc comes in to play fairly late in the game, after being teased in Sailor Venus’ storyline. It’s got great build-up, awesome music, and completely fails to live up to expectations. The controls are rubbish, it’s hard to distinguish towns from surrounding fields, and your choice of location is… limited.

In fact, you can only visit a couple of the towns from Chapter 2, Beryl’s Castle in the North Pole and the Moon. They programmed all this potential in the sequence for very little time spent in it. 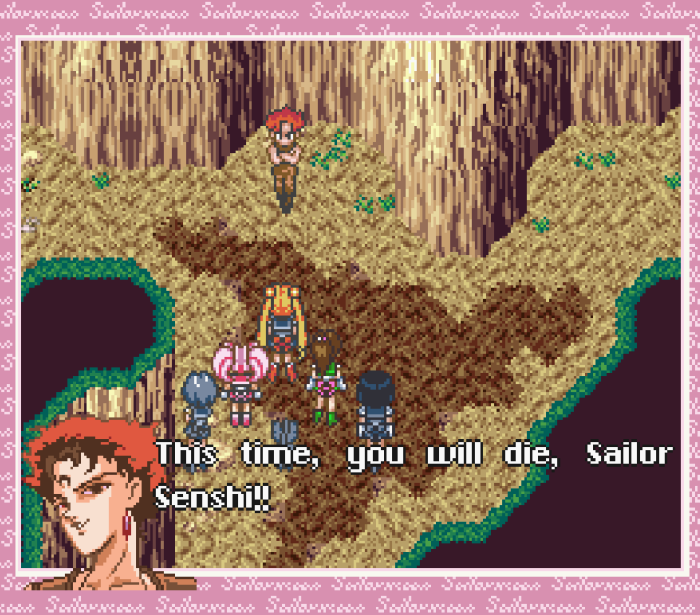 Queen Beryl, The Phantom Sisters, Rubeus, Esmeraude, The Witches 5 and Black Lady all turn up for one scene. I understand the need for brevity with their cameos for most of them, but it’s the last one that really annoyed me.

Black Lady coming face to face with Chibi-Usa could have been a great moment for existential angst and character development. In the end she’s just a random boss encounter. For all the effort they’ve put into the character art and battle pose, they sure didn’t do much with her.

Oh look, I’ve ended up in a 14th Century village with no flushing toilets and no exit, save for the cramped corridor that ends in an identical village.

Oh look, I’ve ended up in another village with the exact same set up… three more times.

As much as I dig the compositions of the music in Sailor Moon: Another Story, the sound mixing is dreadful. When I consider that the hardware producing the square-shaped waves eminated from this game could also produce the subtle, haunting, beautiful soundtrack of Final Fantasy VI.

I’d love for someone to remaster this soundtrack with a better MIDI sample. 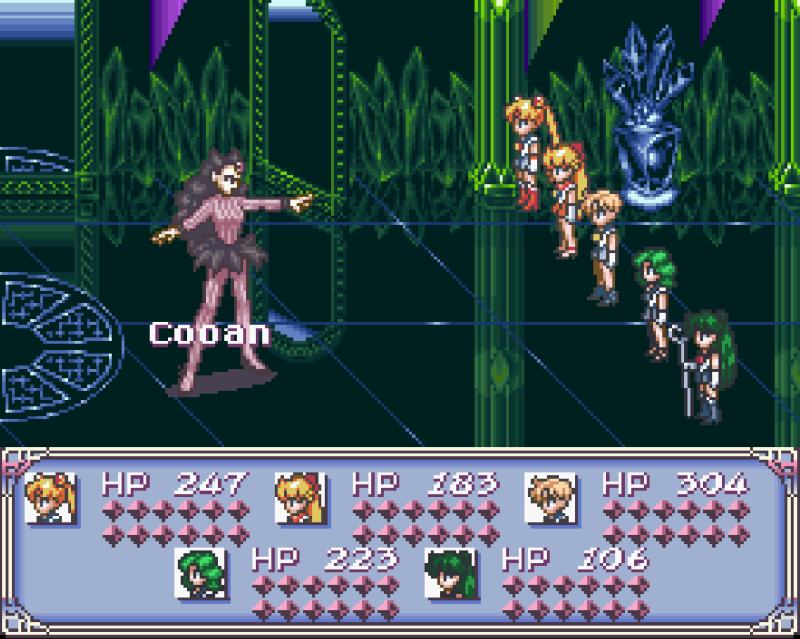 The Senshi don’t give a shit about monsters

The first scene with the Inner Senshi altogether sees Usagi running up to Hikawa Shrine shouting about monsters and everyone’s reaction is to start gossiping about Ami going on a date with Urawa. I love the anti-climatic response.

Even better is the back and forth between the girls, the snide remarks about love lives and the ultimate decision to stalk their friend, which is precisely what these girls would do.

Chapter 3 is a strange descent into the bowels of the Infinity Arc. Poor Hotaru is put through the ringer, reverting back to Mistress 9 and ultimately being forced to square off with her father once more.

You actually have a choice here. Trying to reason with him only leads to a boss battle, but even if you just throw the Silver Crystal at him, it still ends with his death. A great decision from the game makers to include his fate from the manga here, while making it hold a hell of a lot more pathos than the manga ever did.

The Phantom Sisters’ segment could have been as arbitrary and rubbish as Rubeus’ appearance, but the fun of walking around the Black Moon UFO before facing off in a gauntlet of boss battles really makes this memorable.

The women can do nothing to stop themselves, apparently being such at the hands of Apsu’s fate manipulation. Petz’s final “Forgive me, Sailor Moon…” as well as Sailor Moon’s brooding in the aftermath, make this a great scene.

In a scene of extreme pathos (seriously, I felt wretched for them), Usagi sneaks into the Silver Millennium castle in the past as a maid. Queen Serenity, however, recognises the reincarnation of her daughter and realises what this means, what’s going to happen to her daughter, and everyone on the Moon.

Her acceptance of it hurts, but even more emotional is her turning to greet Chibi-Usa, a grandchild she will never meet and the continuation of her bloodline and powers.

Usagi walks away, sad, angry and frustrated that she can do nothing to save the mother she never knew. Perfect for this game, and a brilliant addition to what we’ve seen in the show.

If you like Sailor Moon enough to spend time dreaming about other stories the Senshi could have find themselves in, then this is for you. If you go in expecting anything but a level grind, then beware.

It’s been 15 years but I still think about this game a lot, and hum the tunes to myself quite a lot.

It’s always great to meet others who remember this game as fondly as I do, and I hope to encourage many other dedicated fans who are willing to go through a bit of fuss to play a great story.