Minako is two-timing a couple of guys and is over the moon about it. Little does she know that her guiless boyfriends are actually Tigers-Eye and Hawks-Eye, both determined to win Minako’s love first in a competition of swagger. Minako, however, pulls out all the stops to keep both of them wrapped around her little finger.

I really l like this episode. Like the previous one, with Usui Yoshiki and Fish-Eye, it grants the s0-called “victim” sexual agency – that is to say, it is them pursuing the bad guy. I feel that this is an important distinction to make, since when the Amazon Trio turn into creepy stalkers who turn violent it gives off a distinctly more problematic air.

Here we have the fantastic Minako doing what she does best – going manic and never learning a lesson. What’s best is that she’s playing the field. While the show takes a certain moral stance – she pays for her two-timing with exhaustion – it doesn’t shame her for it. Despite the best efforts of her friends’ judgemental reactions, Mianko remains liberated and, in the end, she looks as though she’s had the most fun.

As such, it’s a fucking baller message since it hands the reins of love and relationships back to those who actually want them.

The opening is pretty typical – Usagi and Chibi-Usa fighting Freudianishly (that’s a word, right?) over Mamoru. I’ll be honest, it looks great, the performances are great, it’s nostalgic… but for the first time I’m getting fatigue from these two screaming at each other. Probably got my quota a few episodes ago with that abusive kendo mother.

Anyway, the group spot Minako on a date with… uh… Hawks-Eye. I thought he only like older women… Well shit Minako, I said I wasn’t going to judge, but seriously girl you can do better. I mean, he totally has hepatitis at the very least.

I also enjoyed the group’s response to the news of Minako’s boyfriend – Luna says that it’s healthy to have a boyfriend (YES GOOD MORE) and Makoto and Rei take this rather badly. Take a look at the artwork here, it’s lovely. This is one of my favourite animators – Hisashi Kagawa. I actually plan to do a lot of posts on the different animators, directors and writers… stayed tuned for one day? 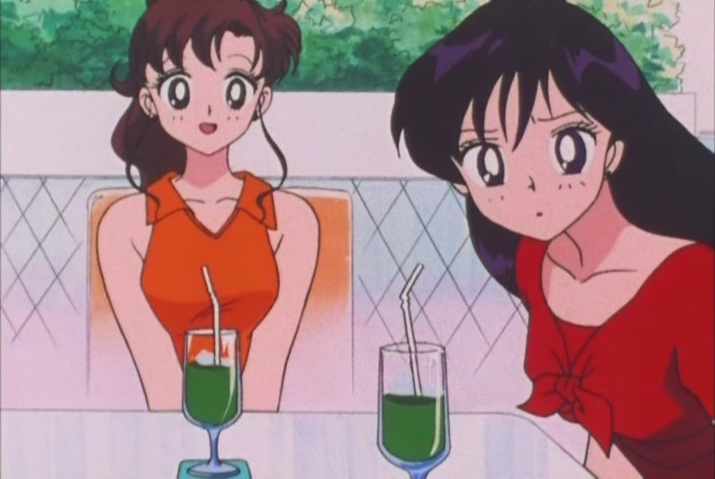 That’s also my favourite outfit of Rei’s, first seen in that bit where Rei smashed her bike into a stand

Minako is dangerously close to being my favourite Senshi right now

She enters the cafe in full-on mania that we haven’t seen since she tried to bleed herself to a Pure Heart back in Sailor Moon S. So good to have her back. Everyone is speechless. She has so many amazing lines here.

“It’s a crime to be so beautiful.”

“Guys I think those eye-drops are kicking in.”

She also intimates that she’d be totally fine nude modelling for Hawks-Eye which is A) completely not weird for a 15 year old girl and B) completely fine for a space rapist transmogrified bird man to participate in.

Minako’s delight at not only two-timing, but also having everyone fucking know it, is amazing.

So it turns out that Tigers-Eye and Hawks-Eye are competing to see which one of them can win Minako’s heart. Hey, it’s underhand, it’s gross, it’s condescending and demeaning… that’s men alright, you nailed it on the head.

By and by, I recently discovered that the Seiyuu for Tigers-Eye is Ryotaro Okiayu, the guy who did Byakuya in Bleach and Treize Khushrenada in Gundam Wing, so hot damn. Meanwhile, Hawks-Eye’s Seiyuu is Toshio Furukawa, the voice of Piccolo in Dragon Ball and Portgas D. Ace in One Piece, so both of them have quite a legacy. FACTS!

This is a great entrance shot. Again, fantastic art, even in scenes that didn’t need it

I love that their machismo and posturing is completely subverted by Fish-Eye slithering in fabulously to demand that they stop fighting over him. At this point in the series it’s still ok to like Fish-Eye, as he hasn’t yet turned into a paedophile. URK.

Man, seeing Minako deciding on what clothes to wear on the following day gave me a real original series flashback. Ahhh memories…

“Artemis, you know nothing, dungarees will NEVER go out of fashion.”

After Artemis looks seriously concerned about her moral fortitude (HE’S THE GODDAMN PATRIARCHY, GUYS), Minako looks mollifying for a second… before completely ruining any opinion Artemis had of her. It’s really rather nice that they absolutely refuse to teach Minako a lesson here.

Errrr Chibi-Usa and Pegasus scene… in which Pegasus essentially says that “In order to find your One True Love, you might need to have many experiences,” said the horse, looking longingly at the 10 year old girl in her pyjamas. I’m not even trying to make these links, this is really that fucked up.

It’s just too easy to make jokes about this any more. Legitimately disturbed.

Right, the moment we’ve all been waiting for, the classic Saved By The Bell “Oh no I’ve arranged two dates at the same time and now I have to pull off the impossible simul-date” scenario, except much funnier. So apparently Minako told both guys to meet her at the clock tower, and they’re conveniently both on opposite sides. Yes it’s dumb and derivative and trashy and I love it.

And, of course, Minako is being stalked by her entire friendship group, because there is no privacy or ethics between friends. Again, reminds me of Sailor Moon: Another Story, where the gang stalks Ami. A complete lack of shame on their part… so any shaming they do of Minako is entirely hypocritical. Just sayin’.

“You know, I’m fairly certain this is the least pathetic stalking we’ve ever performed.”

The entire dating scene is incredible, especially with the Senshi hidden in a bush wondering how Minako is going to handle the situation, and their mounting shock and horror that Minako is actually going to attempt the legendary simul-date. Essentially it involves spending 10 seconds with each of the Amazons, telling them to go get her something, and running to the other one. It’s all very, very good, and Minako looks adorable in every shot.

“Sorry I’m late, I was just taking a massive dump.”

Minako eventually dumps Hawks-Eye in a Godzilla movie and (now this is sociopathic) places the hand of withered old lady into Hawks-Eye, who believes it’s Minako. For the entire movie. Just so she can spend time with Tigers-Eye and keep up the ruse. 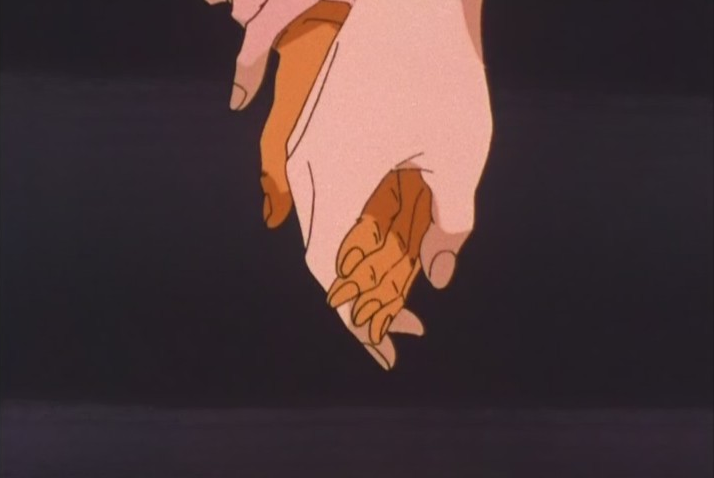 “Wow Minako, your hand is sure leathery and gnarled for a 15 year old girl.”

And finally the rest of the girls admit how impressive this all is. 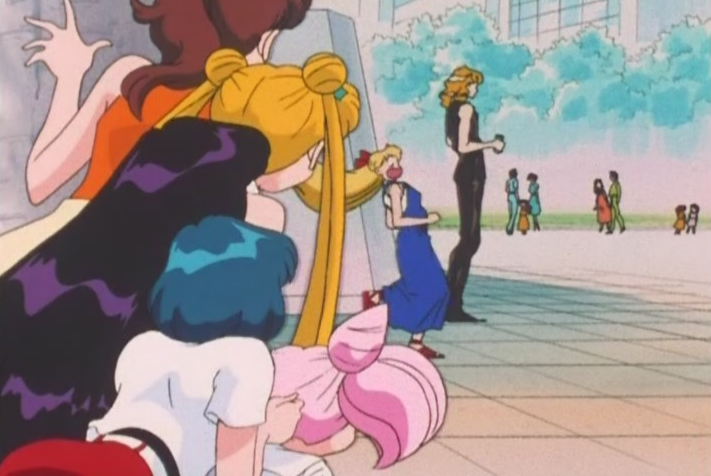 Hawks-Eye’s face when he realises who’s hand he’s been holding is priceless. Well he did say he liked older women…

The running around continues for a while, it’s all fantastic stuff. They do a really good job making the whole thing seem exhausting, and Rica Fukami’s acting of Minako is just flawless here. Give his woman the Oscar. Finally, the other girls confront Minako. I have to say, they’re not judging her for dating, or even seeing two guys at once. The real judgement comes from the fact that she’s lying and manipulating two people, and Usagi suggests she just tell them the truth. This is a great position for the anime to take, and I think is a nice message to kids about relationships. 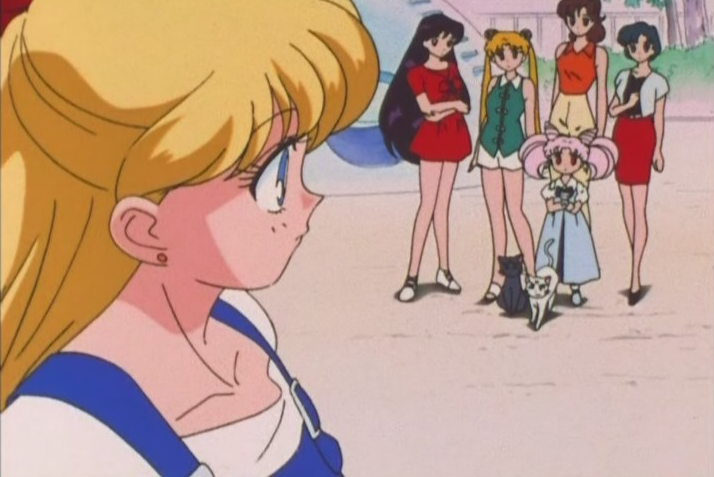 “Minako, we’re not going to judge you for two-timing those dudes, but you totally blocked the shrine toilet with your massive dump earlier”

So refreshing to have a lack of prudish moralising over teen dating.

And of course Minako doesn’t give a shit anyway.

Tigers-Eye and Hawks-Eye eventually meet, of course, and Minako gets her true fantasy of begging them not to fight over her. The demands of which one she will choose eventually start. They’re bother pushy, aggressive, needy, whiny, entitled pieces of shit, like a lot of guys throughout history.

Which makes her final response of “I like you both, here’s my troll face” just perfect. Also completely fucked up considering who she’s saying that to. 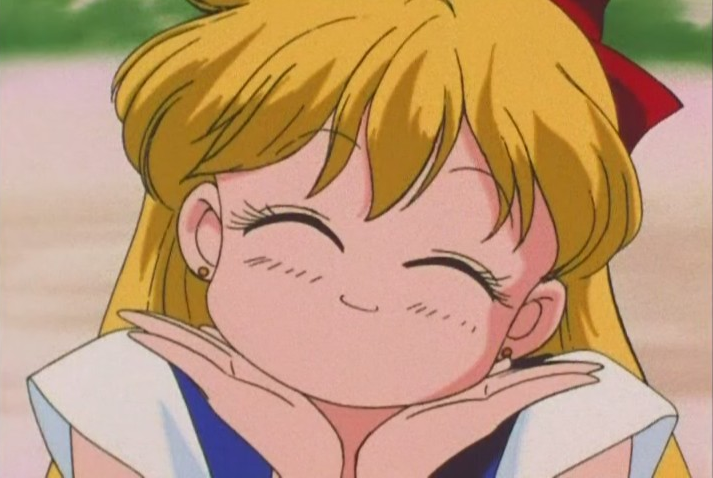 This is the Sailor Moon equivalent of “trololol” face

Aaaaand they’re pissed off sufficiently to start the fight. I love Minako’s hurt reaction of “you were fooling me!?” and their incredulous look at this.

Poor Minako gets the Dream Mirror treatment, and it’s really rather disturbing to see two guys… uh… grabbing it… screw it, I can’t bring myself to talk about it, it’s just too goddamn disturbing.

The fight is fine enough… it’s always nice to see the whole team out for a change. The Remless is a duo, the see-saw team of Gittanko and Bakkonko. It’s amusing to watch them in battle, the Senshi really just stand around and wait for their rather obvious doom, but I don’t really dig the designs or mojo of these Remless. As a whole, I’ve been disappointed in this season’s monster selection.

While Tigers-Eye and Hawks-Eye stand around bickering, Minako goes full hulk and breaks out of her bonds. NO ONE MESSES WITH VENUS.

Feels so good to have Sailor Venus kicking some ass, and she certainly does with a unique execution of her Crescent Beam Shower (last seen impressing some children in Sailor Moon R). Seriously, this is a gorgeously animated scene, and it’s all the better for seeing the Amazon’s run like heck.

The subsequent Moon Gorgeous Mediation is just clean-up work after that display.

Sailor Venus puts her hands together in a sign of forgiveness (although one might argue that she has little to apologise for, I like that it’s a silent contrition, and the approval from the rest of the team is immediate and warm). Gosh I like this episode a good deal.

Back in the bar, Tigers-Eye and Hawks-Eye bro-ishly agree to call it a draw, while Fish-Eye recommends that they both just fuck off instead. APPROVED.

Now this conclusion is weirdly lovely? Minako is brooding on a bridge with Artemis at night, with Tokyo looking gorgeous and purple in the colour scheme of Sailor Moon SuperS. Artemis goes some ways to making amends by suggesting to Minako that true love is only something you find by trying a few relationships beforehand, which I thoroughly approve of, both in message and execution in this episode. What a lovely, strange ending to an otherwise hilarious episode. Great capstone.

“But Artemis, don’t you think I should up my game to three guys next time? I could two-time for the Olympics.”

AND THEN A NEW ENDING!? Looks like Watashi-tachi ni Naritakute is OUT and DISCO IS IN! I love this ending too… looks like I’m going to have to talk about it soon.

All in all, beautiful art, the Amazon Bros get taught a lesson, there’s enough Minako to go around, good sex-positive message, female empowerment and sexual agency… yeah flippin’ great episode. The Remless were naff but you can’t have everything. There’s some great episodes early in Sailor Moon SuperS don’t you think? More than I was expecting. There’s some bum episodes, but I don’t think the entire series’ fatigue has set in yet.

FINAL THOUGHT: This is literally the last time Minako ever has a good storyline ever again, and that super bums me out.